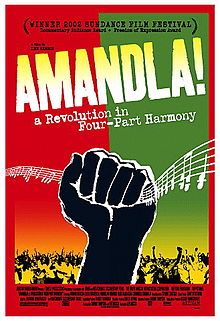 For sheer variety and pleasure, the Amandla! soundtrack has to be one of the most satisfying South African music compilations of all. There are old and new sounds, jazz and pop, gleaming studio work and rough-and-ready actualities from perhaps the most sonorous liberation struggle the world has ever seen. These 29 tracks come from the much larger body of music contained in the documentary film Amandla! A Revolution in Four-Part Harmony, by Lee Hirsch and Sherry Simpson. In the film, the songs themselves are the central characters, and to get so many of them onto a single CD, some had to be cut painfully short. That said, this album offers a powerful, deeply moving audio journey.

The high points come in a 2000 remake of Mbongeni Ngema's "Lizobuya" (It Will Come Back), Hugh Masekela's "Bring Him Back Home" (a tribute to Mandela, re-recorded to omit the orginal's mention of Winnie), and in two much older tracks, Nancy Jacobs' "Meadowlands" and a young Miriam Makeba's "Beware Verwoerd." With a mood of total uplift, "Lizobuya" (sampled for this review) captures the explosion of sound and feeling that drove this musical movement. A huge choir led by Ngema's scratchy, testifying voice rides over jubilant, swinging music that has the feeling of a tightly wound spring, at last releasing. The cheery female voices harmonizing on "Meadowlands" suggest sweetness and light, but the subject is in fact forced removals from culturally-rich Sophiatown--bulldozed by the government in the early 60s--to the functional, well-supervised township named in the title. Also deceptive in its sunny mood, "Beware Verwoerd" warns the intellectual architect of apartheid that his days are numbered.

And there's lots more here: the defiant thump and roar of the toyi-toyi dance performed at a rally, choirs and choruses singing in town halls and even a prison, intimate memories by present-day greats like Miriam Makeba, Sophie Mgcina and Dolly Rathebe recalling songs from the struggle, the beautiful piano inventions of Abdullah Ibrahim, and a taste of today's socially engaged, r&b-tinged sound in Joe Nina's "S'bali." The supple, soaring voice of Vusi Mahlasela features prominently in the film and on the CD. His song "Mayibuye" in particular has a refrain that reaches for heaven and takes you along.

Of course, there is room to quibble about what is not here. "Folk Vibe #1" by Tananas is a pretty bit of new-age Afro-instrumental, but it seems an odd choice for a compilation (and film) that neglects to acknowledge the music of the brave multi-racial rock act, Juluka, and other less known political music from the white side. Anyone who followed or participated in these events is apt to raise some such issue. But none of this takes away from the achievement this film represents, or the sheer pleasure its companion CD provides.

Contributed by Banning Eyre for www.afropop.org