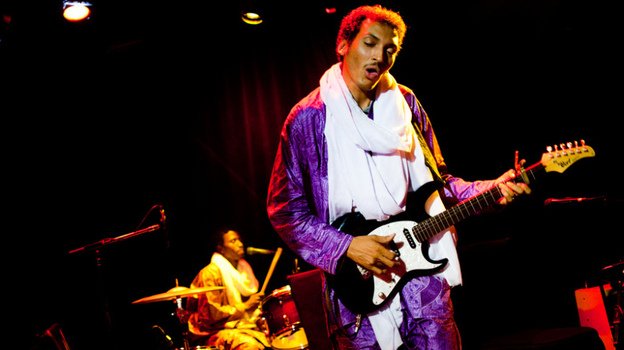 Bombino’s Nomad came out just over a year ago, and the record has served him well. The increasing prominence of Tuareg music, excellent production from the Black Keys’ Dan Auerbach, and a heavy dose of promo from Nonesuch Records brought the guitarist to stages  across the world, a prospect that would have been unfathomable only years before. Perhaps the crowning achievement in his rise to world music stardom, Bombino will take the stage at the final weekend of this year’s Coachella festival. The man’s been an armed rebel, Angelina Jolie’s guide to deserts of Niger and, by the end of April, he very well might be the next fashion icon of festival-going millennials everywhere.

That’s why the performance video we found this morning is so special. It features Bombino and band performing at the opening of a Tuareg cultural center in his hometown of Agadez (sound familiar?). As a performer who has graced some of the world's prominent stages, performing at a cultural center could seem beneath him. But as a man who has fought for the cultural and political integration of Tuaregs across Africa, the opening of this center must be a momentous occasion, and it seems to show in his performance. It’s a safe bet that the entire Afropop staff has seen Bombino live at least once in the last year, but no one saw as impressive a performance as this one. In fact, while the live shows were unquestionably fun, the question of whether Bombino shines as a recording or performing artist was debated at length, resulting in a modest majority who preferred the records.

They wouldn’t if every Bombino performance were as red hot as the one captured in this video. It’s an old rock ’n’ roll cliche to say that the guitarist’s fingers flew across the fret board, but there’s no other way to describe his hands, really. The signature “desert blues” sound that he practices is practically all hammer-ons and offs, bends and syncopation, and where the live performer named Bombino who played Celebrate Brooklyn last year seemed a bit dazed and prisoner to the beat, this Bombino looks more like he is commanding the beat than being commanded by it, hammering on ostinato guitar riffs one-handed and sliding his body back and forth, not in a daze but in agreement. Yes, this beat is unstoppable. Yeah, it’s just a YouTube video of a popular musician performing at the the opening of a cultural center, but Nomad made Bombino part of the global culture, so a performance like this will win our pride and admiration every time.

SAM: THESE ARE OPTIONAL FINAL REMARKS. TAKE THEM OUT IF THEY SUCK.

But in all seriousness, here’s hoping the Coachella crowd doesn’t co-opt the guy and start wearing tie-dyed tagelmusts. After all, we liked him before he was cool.