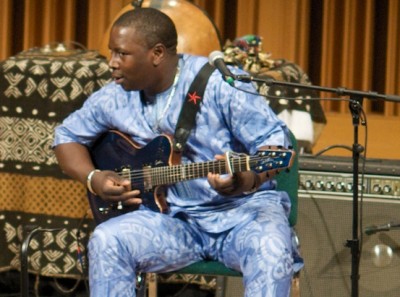 In February, 2007, Vieux Farka Toure made his first US tour.  In fact, the gig he played at Wesleyan University's Crowell Concert Hall was his third public performance leading a group in his life. The young guitar maestro pointed that out in his return visit on October 26, now speaking quite passable English. Vieux recalled that that first visit was 10 years ago, not 6 1/2, but he can be forgiven.  So much has happened for him between these two concerts that it must have felt like 10. 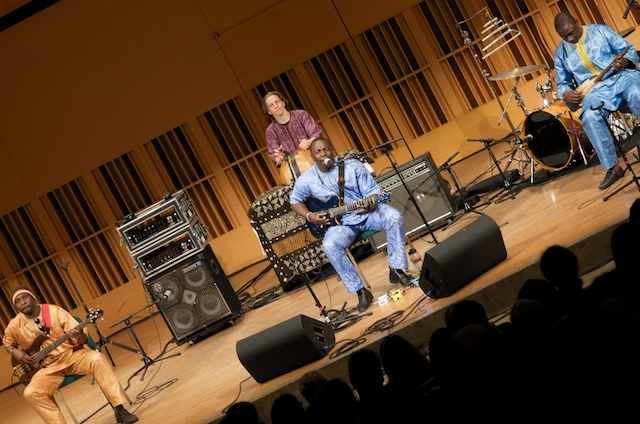 That first time out, Vieux was already a stunning guitarist able to combine the guitar language of Songhai and other northern Malian idioms that his father (Ali Farka Toure) created with his own forays into other African styles, blues and rock.  He was also something of a showman, relaxed and personable, if not the sage-like, enigmatic character his father was on the stage. The whole matter of honoring his iconic dad, and escaping from his shadow figured prominently in the interview we did at that time, inevitably.  So maybe the biggest news of this bookend moment in Vieux's career is the remarkable extent to which he has become his own man. By now, he's done sessions with John Scofield, Dave Matthews, the South African rock band BLK JKS, among others. Vieux has made his way in the world, and it shows.

Veiux arrived at Crowell this time with a quartet. Only drummer Tim Keiper (a Wesleyan alumnus) was also in that original band. Congolese bassman John Bashengezi and ngoni player Moussa Diabate--both US based--were recruited for this tour. But you wouldn't have known it. The musicians gelled effortlessly, moving through just 10 songs in a generous set that ran close to two hours. The musicians mostly performed seated, before a full house, correctly tempering the performance to the pacing of a concert hall rather than a nightclub--where Vieux can also shine, though in a rather different way. His PR calls him "the Hendrix of the Sahara." The analogy is off in a number of ways, but Vieux can certainly turn on the rock 'n roll fire when he likes, something he really only demonstrated late in this show. 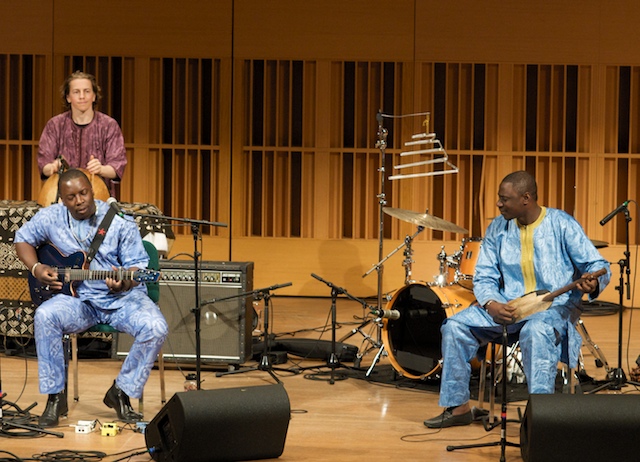 Mostly, Vieux and his compadres hypnotized with elegant, leisurely excursions that amounted to a kind of electric desert chamber music. Vieux would oven begin songs alone, his finger effortlessly flying across the fingerboard to produce nimble, watery riffs that instantly cast a spell. He did not use a flatpick, so his finger-style picking added to the warmth and intimacy of his sound. His deep connection with Tim Keiper (on drums and percussion, notably the calabash) was evident in the way the two could slyly shift rhythmic textures, and settle into trenchant grooves. Songs took their time, but never overstayed their welcome, a testament to the chemistry and ingenuity of the ensemble. A song from Vieux's latest CD, Mon Pays, was an early high point. "Safare," one of Ali's older tunes, came through brilliantly with shades of delta blues mixed with the unmistakable sonority of Sahara pentatonic lyricism.

Vieux has grown as a performer, confident in every move now. His guitar solos are eloquent and varied. He can soar with impulsive, impetuous bursts of notes, or snap with the low strings effectively turning his guitar into a drum. And he can rock, but his acquisition of rock and jazz idioms is deeply embedded in his sound; never obvious of derivative. Mostly, Vieux couches his vocals deep in the mix, sometimes using it to shadow his sterling guitar melodies. But when he wants to, Vieux can cut loose with a strong, keening lead vocal reminiscent of his father, and the effect is all the more powerful for his judicious use of it. 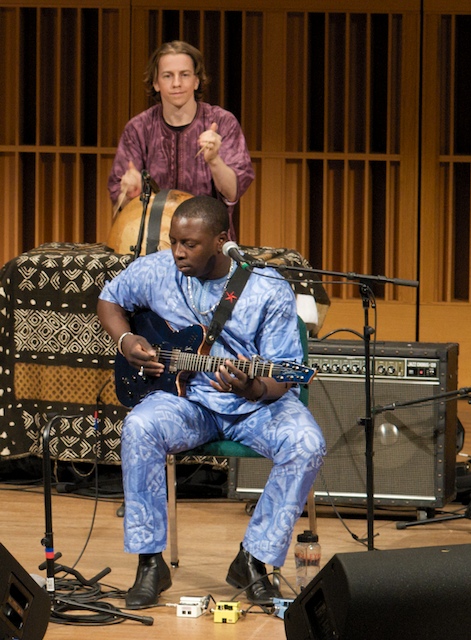 Late in the set, after leading the crowed through a very successful audience sing-along, Vieux announced, "Let's go dancing."  Both musicians and audience dutifully rose, and the party was on for the last 45 minutes. The final song of the set was another Ali cover, though Vieux's team departed from Ali's Latin-tinged version, revving the song up to a blend of soukous and rockabilly.  The encore featured the audience singing a vamp while the musicians played percussion, danced, and took in the night's glory.

Vieux has a deep connection with Wesleyan. That 2007 concert happened because Eric Herman, a recent graduate, had befriended Vieux in Mali and produced his first album. Vieux acknowledged the connection, promising to return and play here again in 10 years. Aside from delivering a monumental performance, Vieux made all of this feel like family.  And the audiences' roaring approval was the proof. 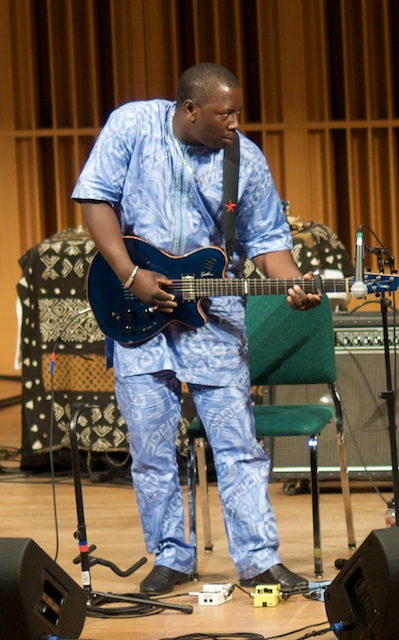 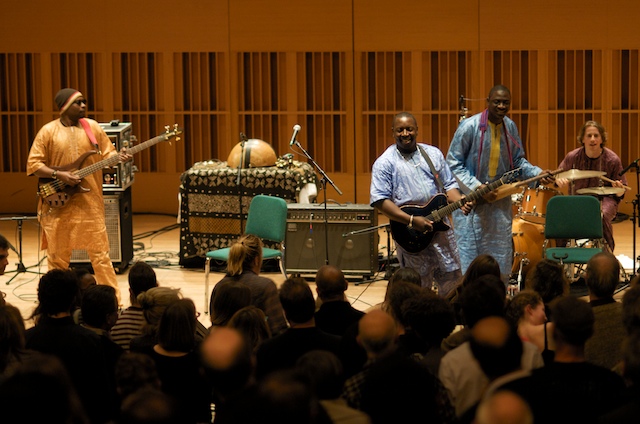 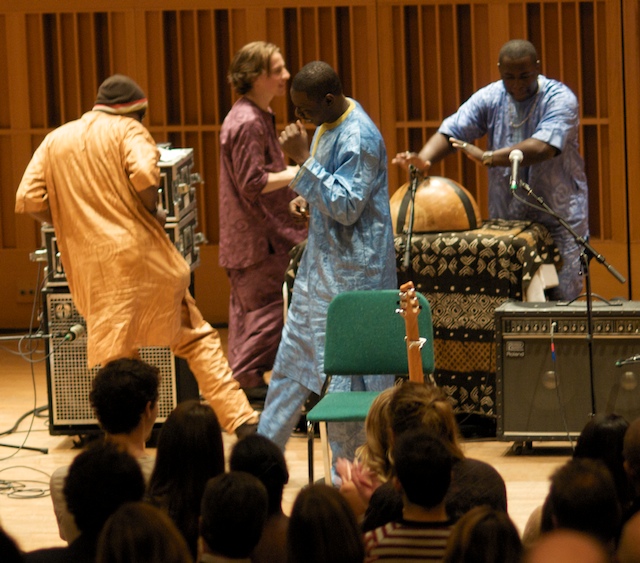 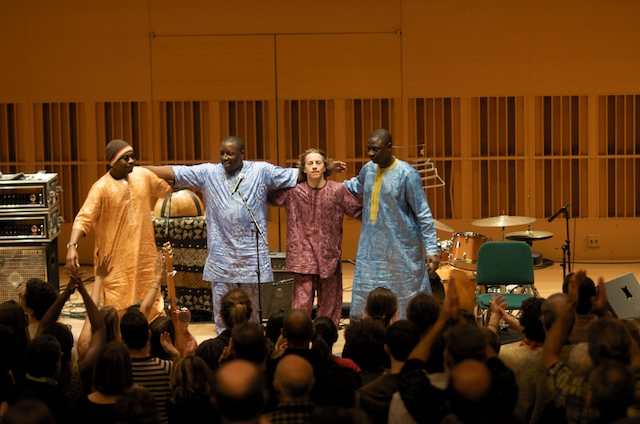