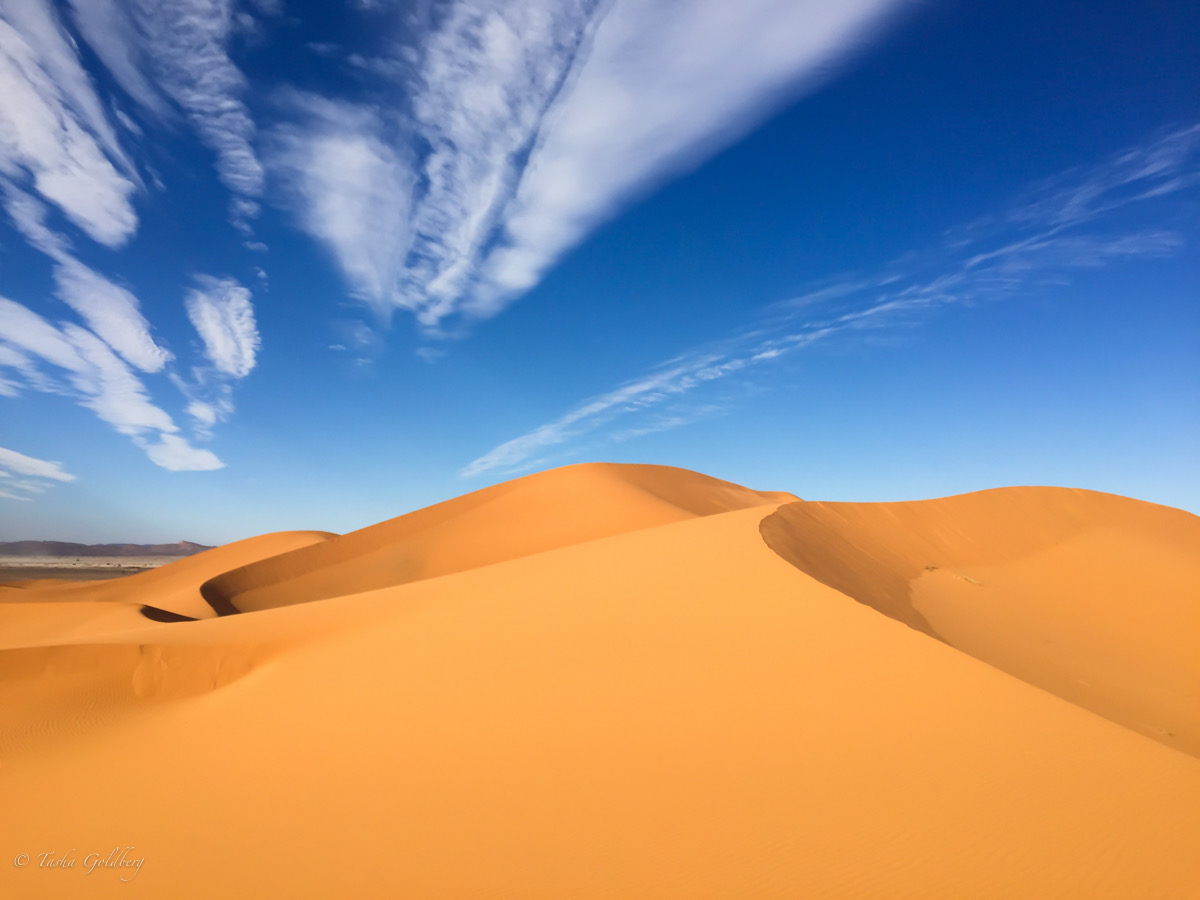 Driving through the desert felt almost like flying. The saffron-tinted sandscape, undulating with the slightest variation, made it feel like I was barely moving at all. The dry desert air parched my lips to a tight chap, snapping my speech…and so I listened. My heart still vibrating from the special intimate moments I spent with Hamad and his band Bambara in the village of Khamlia, in the Merzouga district, was archived in a CD that now provided a soundtrack, a steady narrative via shifting tempos. Unknowingly, I surrendered to a sonically induced trance, preparing to connect to Morocco through her mosaic of music. Wandering in between tangerine shoulders, I contemplated the meaning of the name of the indigenous nomads of Morocco, the Amazigh, the free ones. I could hear that freedom in the sound of high-flying birds in an otherwise soundless sky, the alluring whisper of running water calling from deep wells and the gentle rhythm of baskets shaking steam free from freshly roasted peanuts.

Morocco has many worlds, shattered and pieced together, with their rough edges touching in a beautiful mosaic. Bass and rhythm come from indigenous Berber tribes and southern Gnawa nomads, while melodies are floated in an Arabic influence. Despite the range of diversity, much of Morocco’s music huddles around a similar sonic sensibility, the use of music to induce trance. Whether it is the heartbeat in the drums, the dance of the shaken, oversized Gnawan castanets, or the expression of a single Arabic word sung over hours, music in Morocco casts a spell. Far from a strict Western ideology of music as performance, music is a vehicle of transcendence, used in celebrations and in healing individuals and communities. Hamad explained to me, “This music gives you energy you know … this music, you can play it if you are tired, if you are angry, if you are happy…you know. Sometimes, you know you move it in your body and your spirit.” Throughout Morocco, people dance to listen and create a direct experience of knowledge rather than studying it through pages in a book. 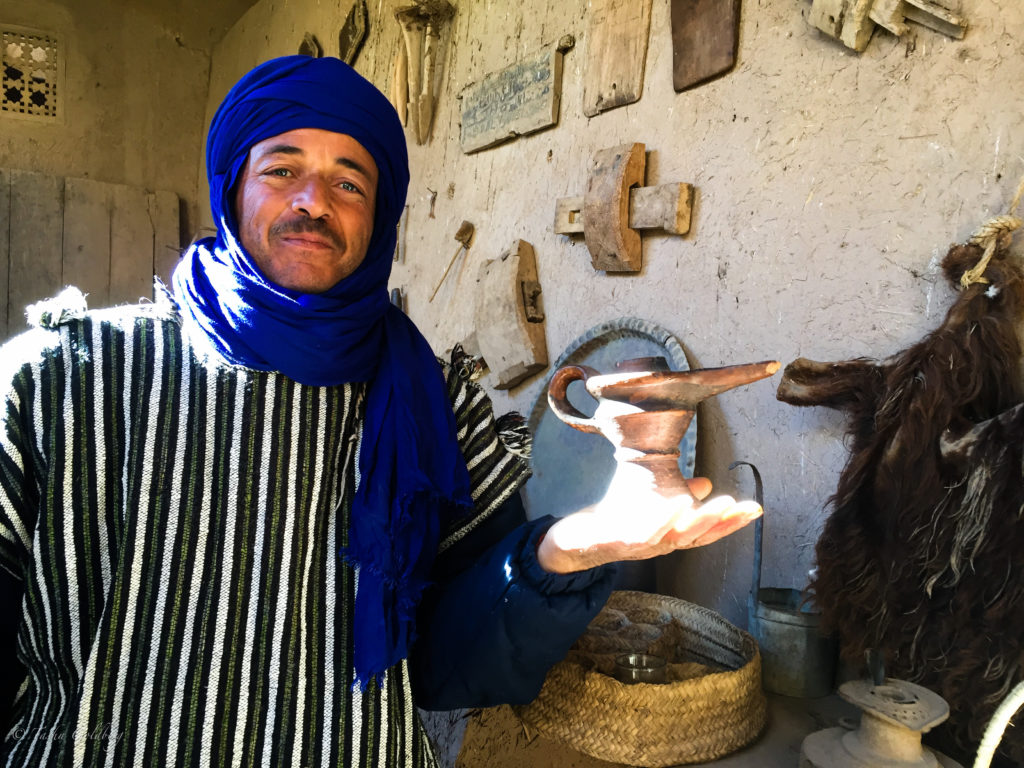 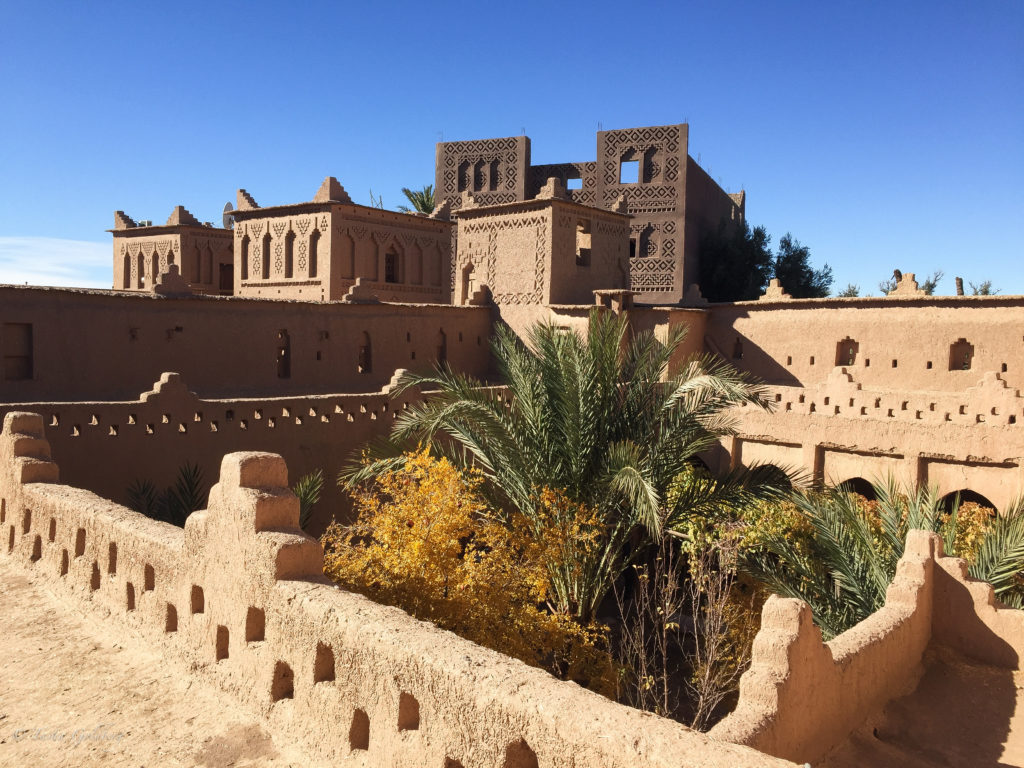 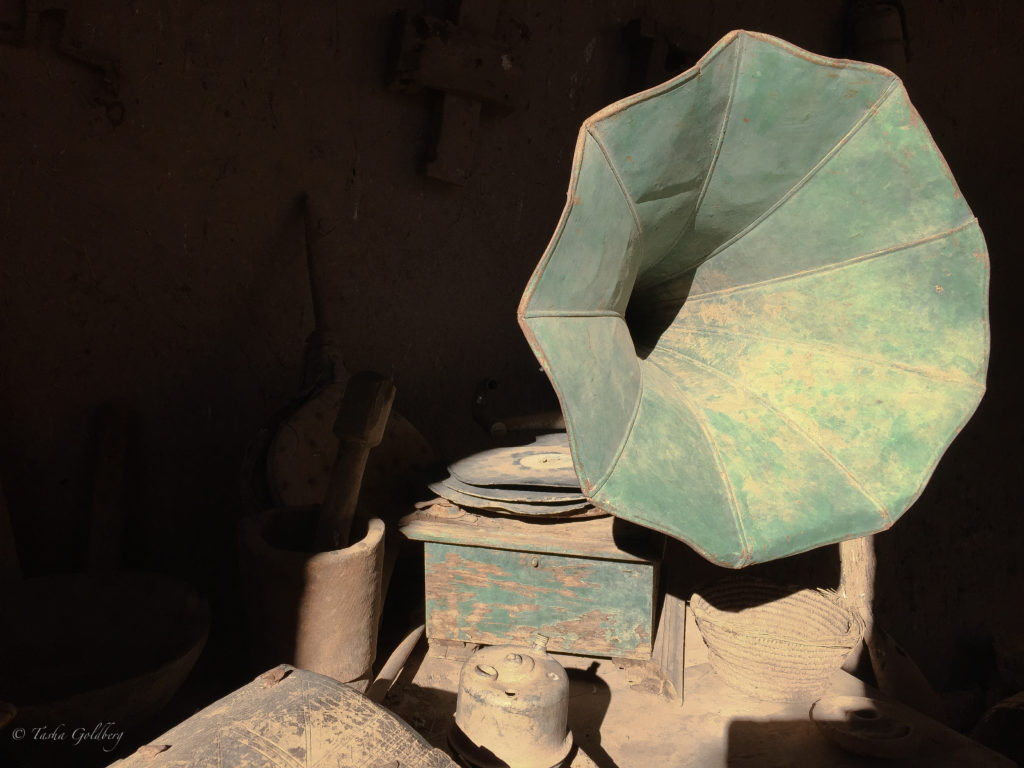 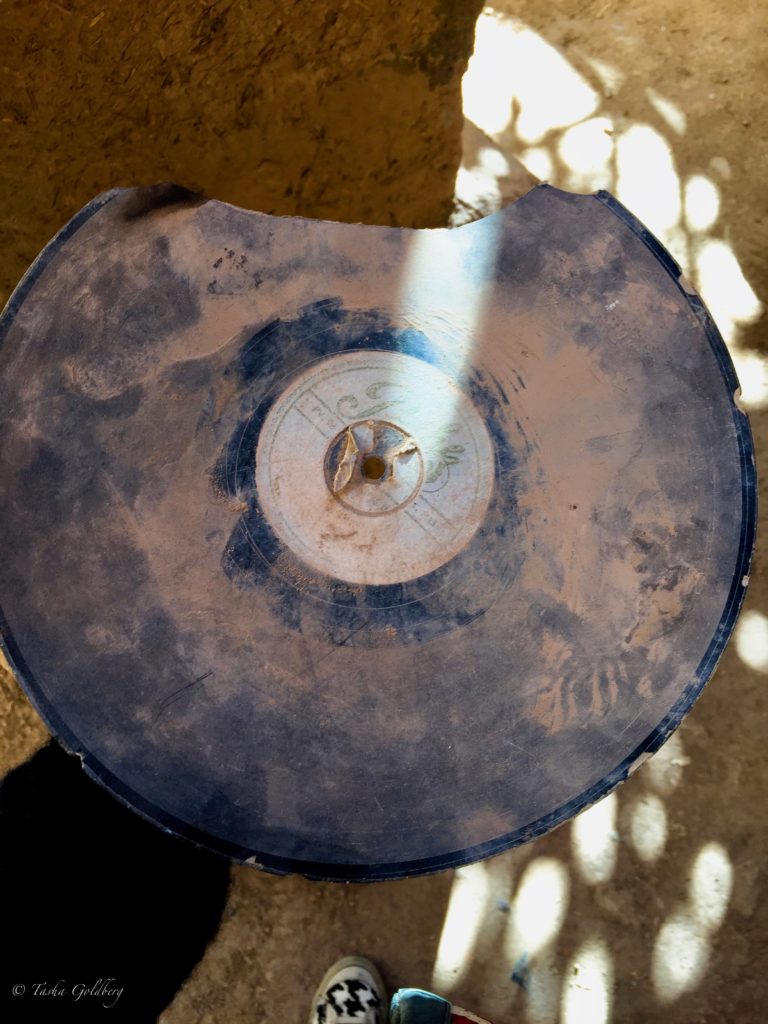 Out in the desert, far from any city center, I discovered evidence of voices in vinyl. Counter current among native sounds is recorded music from the world. Records have that special way of delivering connections beyond the confines of physical travel. The music makers stay in their home, while their sound takes flight, landing wherever the needle drops it. In an ancient kasbah, a man we called Big Blue, an adequate moniker for a man whose eyes matched his indigo djellabah that wrapped around his head, curated ancient memories by the artifacts left standing. In the center courtyard where a cluster of pomegranates, oranges and dates sweetened the air, he shared the lifestyle of the past. Off to the side, standing in a shaft of light just like an old Casablanca starlet with sunglasses on, I spotted a vintage phonograph. The soft palette of colors in the heavy-set box literally took my breath away. Its needle looked medieval, a stout thickness that would make the big boys of the DJ world squeal like little girls at the thought of dropping that anywhere near a record. But judging by the years of caked desert dust, this was likely the only needle that could carve out sound from the cracked wax slabs, turned a chalky gray from years of exposure. 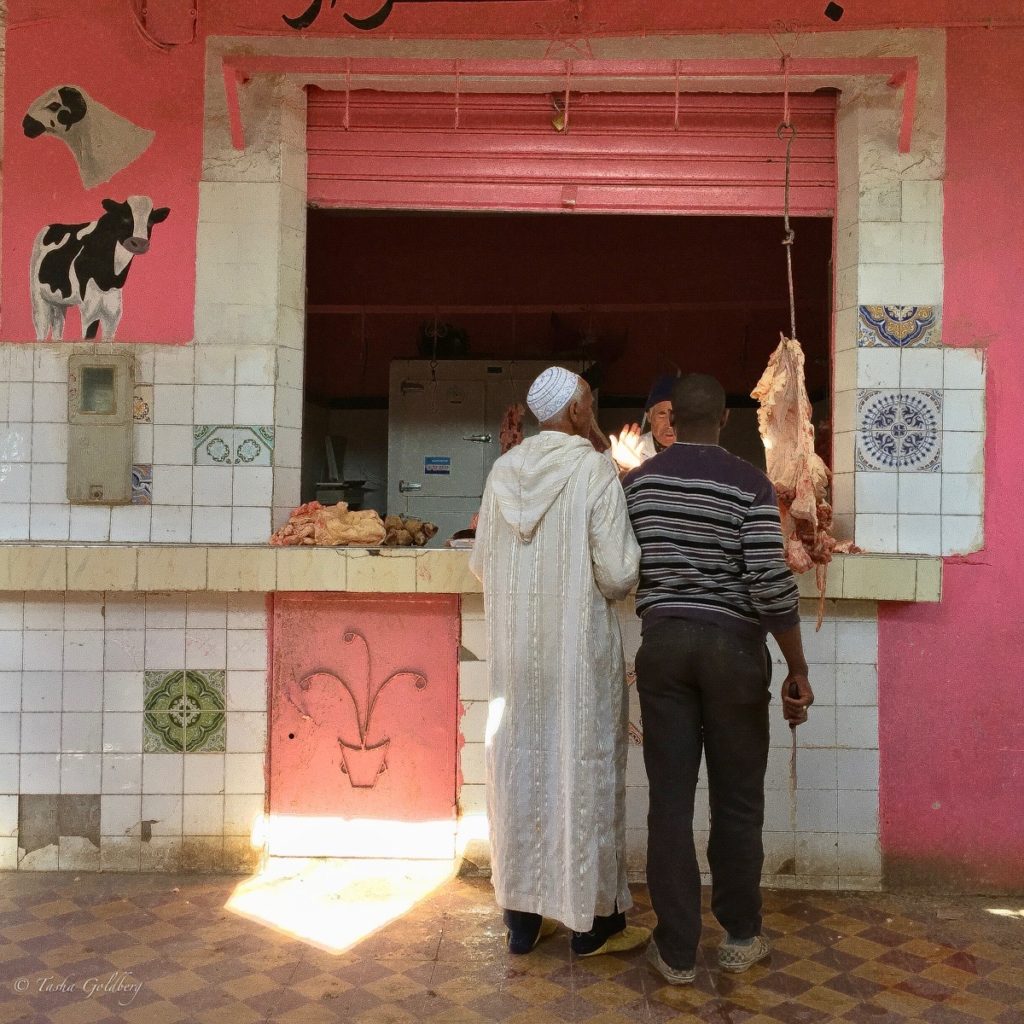 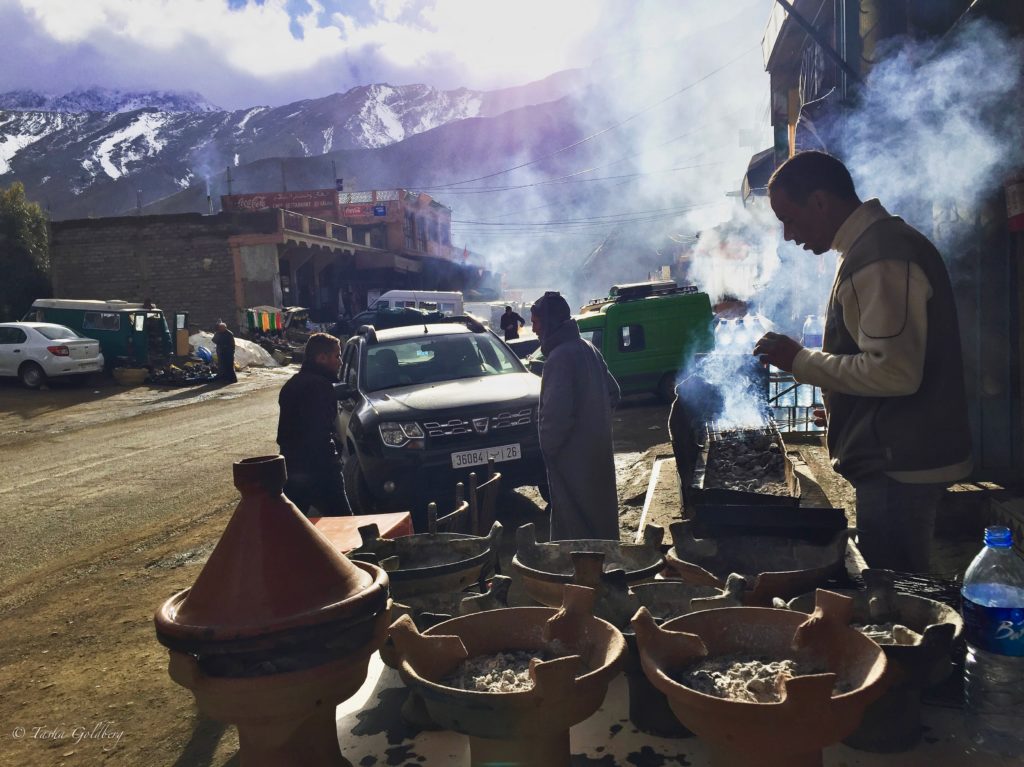 The sighting of this vintage vinyl made my ears hungry. We caught a few more delicacies of desert travel, stopped through the High Mountains for truck-stop tagines, and headed back to Marrakech. I wanted to try my luck and find some wax delights. First stop was to one of Marrakech side markets, sprawling a good eight to 10 blocks radius from its center. Dodging donkeys, my eyelashes danced to fan away the pungent aromas of jasmine, roses, meat, urine, diesel and incense. I was hoping to find the dealers with records stashed among their antique wares. When I leaned into a stall, I felt like a neon American dollar sign, dealers instantly jacking the prices at the sight of me. Selecting from vintage stacks and bargaining, well, let’s just say this was not my first rodeo and before long they had their sleeves rolled up with mine to invest in the dig for scratch-free 45s. My select was based purely on the least number of scratches, unable to decipher the Arabic words. The record turned out to be exactly what I wanted, a recording of some type of tribal trance music. 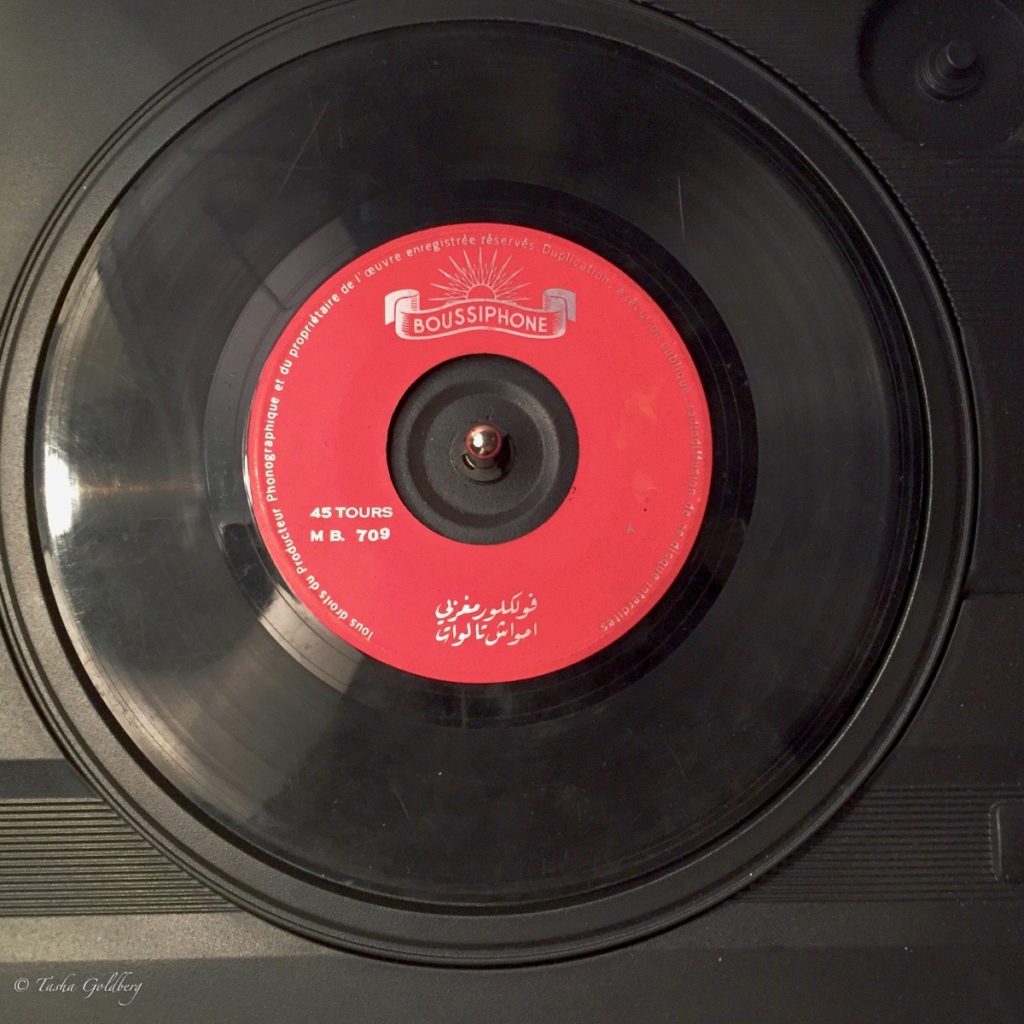 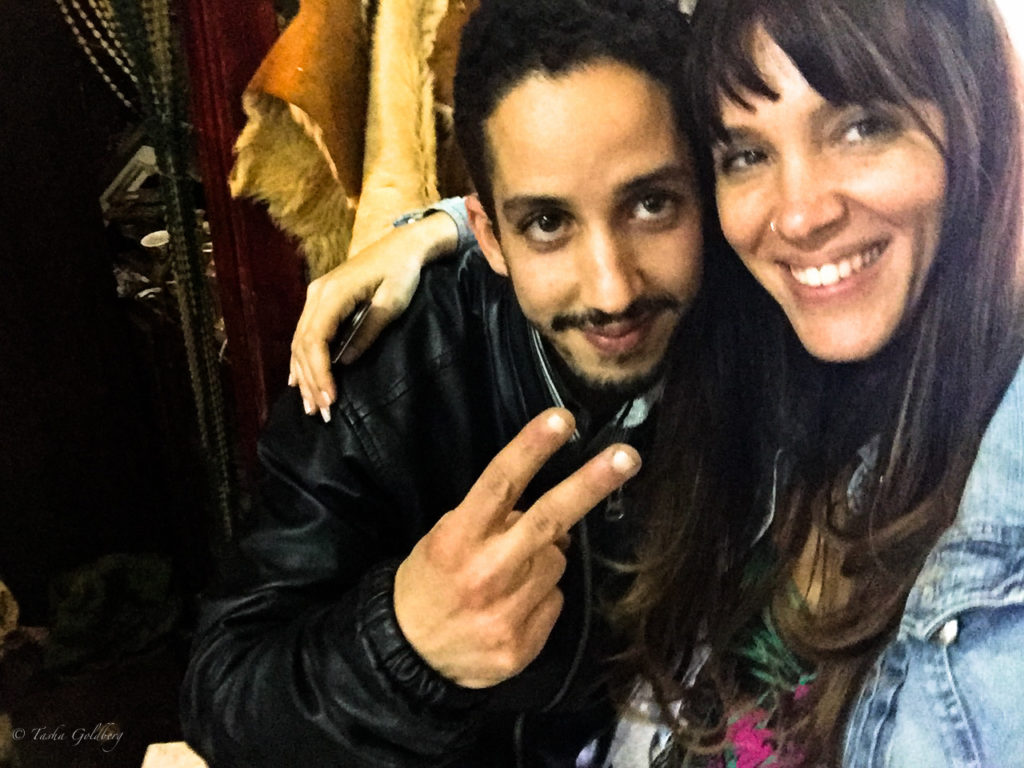 My favorite find was a spot narrower than a bathroom in a bar in the Lower East Side of Manhattan. With barely enough room to squat on the small velvet stool and pick through thousands of naked stacks, I actually felt more comfortable than in most places. The young man helping me eagerly handed me his prize collections first, featuring mostly French pop from the '70s and '80s collected by his father. Records were not often asked for, and so he had to find a key for the locked chest, literally re-enacting a fantasy of mine where I am privy to a secret stash of sound. I worked my best broken French and flirty eyes to get him to help me dig, and after hours of work and laughter, we came up with some Moroccan and plenty of Egyptian music. We spent another hour or so trying to wind up a vintage record player to sample the sounds, finally giving up when the effort sparked a heated argument with a neighbor that seemed possibly about other matters. I settled my selections, although to this day I still wish I would have grabbed a few more, even if I had only one side to enjoy. 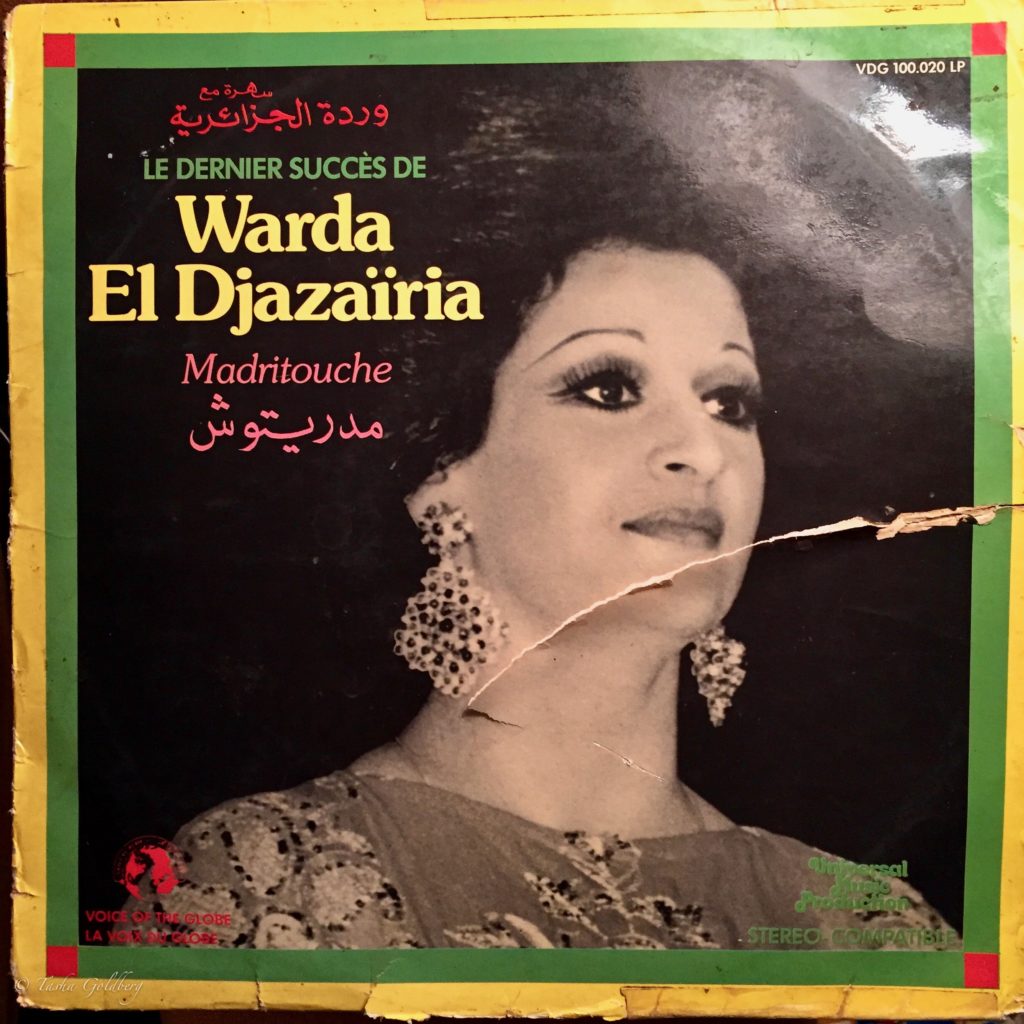 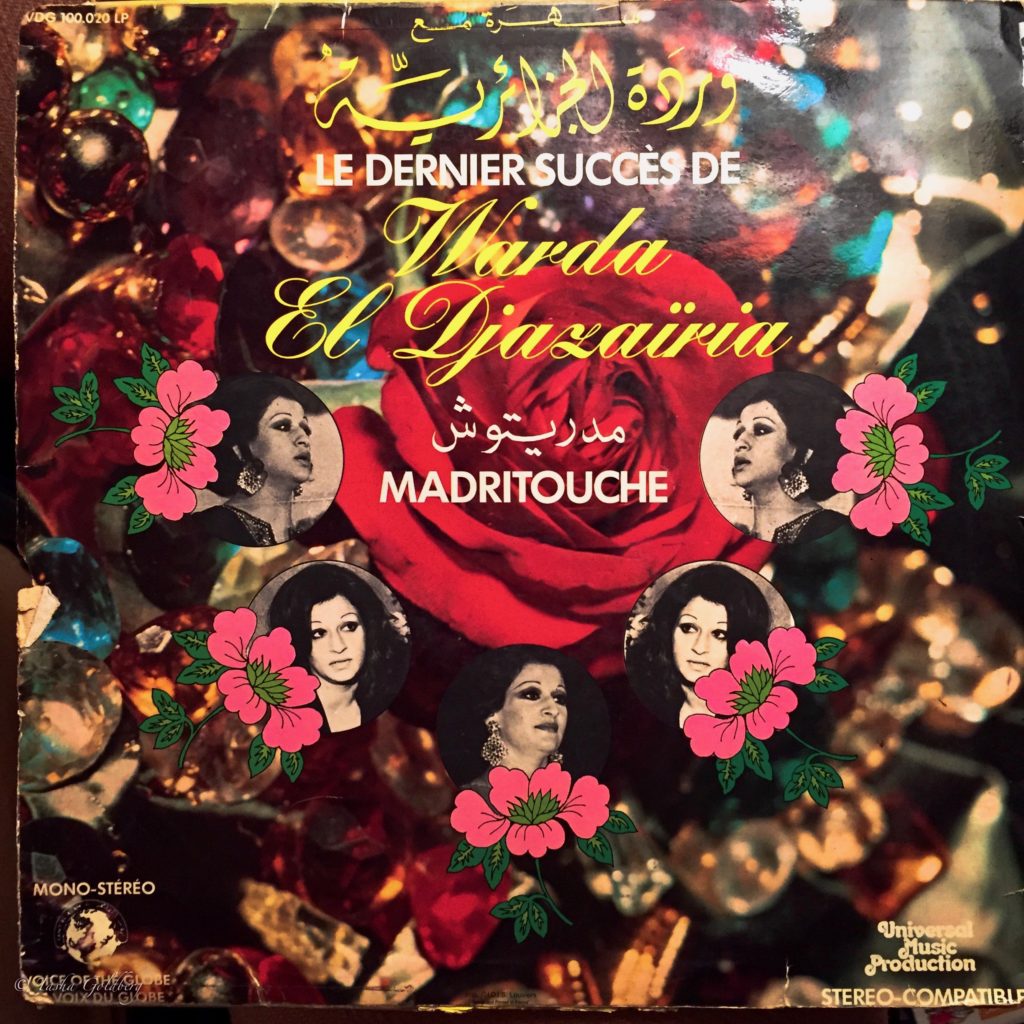 One album I scored that was fully intact was by the great Warda El Djazairia, or Warda the Algerian Rose. This iconic woman was adored and cherished by her fans, held up in a manner similar to that of Fairuz and Umm Kulthum. She made beautiful music, but she also made meaningful music; music that spoke to the true stories of her social context. Born in France around 1939 or 1940 to a Lebanese mother and Algerian father, by age 11 her music was already being heard in northern Africa. Soon after, her family was forced to leave France after her father was accused of storing weapons for the Algerian independence movement, Le Front de Libération Nationale (FLN). At that time, Algeria was still under French colonial rule and so the family settled in Beirut. The young teenaged Warda continued to sing in local clubs and cafes, blending popular songs with nationalist subjects. She won the heart of a prominent Egyptian singer-songwriter Mohammed Abdel Wahab, known for his songs that became national anthems in Libya, Tunisia, the United Arab Emirates and Egypt. He invited her to live in Egypt, where she continued to blossom and caught the attention of the second president of Egypt, Gamal Abdel Nasser, champion of pan-Arab nationalism. Upon his invitation, she famously sang the song composed by Abdel Wahab: "My country, and the revolution against colonialism/If we all seek to sacrifice ourselves for you/Colonialism will come to an end” (from the film Al Watan al Akbar--The Greater Nation). Her voice became an aspirational expression for revolution, not only for Egypt, but within the pan-Arab movement.

Warda rose to popularity during an era that would be difficult for us to imagine, a time when everything was changing, evolving and reforming. As countries gained independence from colonial rule, young people were exploring their new freedoms and international interest was high. This was a time in history when the Black Panthers had headquarters in Algeria, and

Jimi Hendrix spent his down time in the coastal areas of Morocco. Diverse cultures lived among one another, sharing philosophies and expressions of life. In 1969, the first Pan-African Cultural Festival took place in Algiers. Musicians from all over the African continent made their way to the event, including Nina Simone, Miriam Makeba and Archie Shepp, as well as political leaders like first president of Angola, Agostinho Neto, and Amilcar Cabral, leader of the Guinea-Bissauan independence struggle. The popular music of North Africa reflected the shifting and sharing ideologies and new styles. And yet, there seems to have been a respect for tradition.

Warda has remained important throughout all of the shifting times. Her music shared strong national messages and her voice was, and still is, enchanting. The album I found was originally recorded in 1974, and reissued by La Voix du Globe, an Algerian label operating in France. A sweet songstress friend of mine, herself half Syrian, half Lebanese, HaBeBe (HaBeBe.rocks), listened to the tracks along with her Skyped-in aunty living in Syria. They were delighted to help me translate the meaning of the Arabic words, but it was the deeper feelings of Warda that I hold dear from those talks. Appreciating the loveliness of the sweet music of the flute and Arabic violin is easy, and of course the sheer authenticity of Warda’s voice. But as HaBeBe and her aunty listened, the track was punctuated by the sound of bombs going off in the distant but not too distant village in real time. How could the power of music to transcend and heal be so accepted and clearly understood, yet be so disconnected from the pain and suffering of today’s world? Why wouldn’t every radio show in the region broadcast the music that could soften and heal? It is possible, Fairuz was famous for this. Radio shows that played her music had the power to halt fire during war times. HaBeBe and her mighty aunty dared to do just this, they turned up the volume and prayed that even one broken-hearted soul who has fallen into the shadow of war would hear the song. They prayed that the sweet herb called madritouche that Warda sings of, the healing plant that is a cure-all, would find those ravaged and suffering and heal them. Perhaps when we listen again, we can be as brave as HaBeBe and her aunty, and dedicate the song to delivering its power of healing to those who need it most.

(excerpt of the loose translation of "Madritouche")