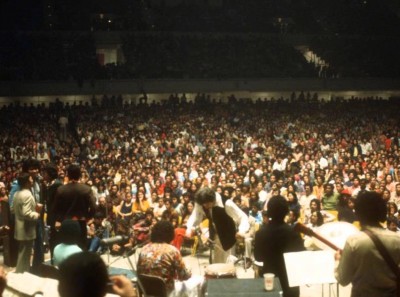 To give you a better sense of some of the artists whose music and stories you can hear on our "Fania at 50" program, we've put together this list of featured artists. Dig in!

Aurora Flores describes herself as “a communicator, bandleader, composer, writer, activist and original barrio girl.” Her group, Zon del Barrio mixes classic salsa, merengue, bomba, plena, boogaloo and Latin jazz. Aurora is the former editor of Latin New York and she was a contributor to Billboard magazine; she is currently writing a book about the life and times of Jewish salsa legend Larry Harlow. “I think, because I’m a woman on this scene, like anyone who’s ever been an outsider on any scene, you become very good and very adept at making your own opportunities, because they leave you out.”

Louis Bauzo is a master of Latin music, who has played with everyone from Tito Puente, Celia Cruz and Eddie Palmieri, to Johnny Colón and Larry Harlow. For the last 40 years, Bauzo has taught percussion and led workshops at the Boys and Girls Harbor Conservatory in East Harlem. One of the workshops is a big band devoted the mambo repertoire of the ‘40s and ‘50s. “The big band is a perfect example of music that you just can’t get anywhere else,” says Bauzo, “The band is just too big, the way the economics is run today. As far as I’m concerned, that music from the Golden Age will never be repeated, just socially and economically it’s just changed, you’ll never see that again. It’s a shame, because that music is terrific.”

Gianni Mano is the bandleader of the Williamsburg Salsa Orchestra: “It started as a fun arranging project, which was to take some of my favorite indie rock tunes and arrange them for my dream band, which is an 11-piece salsa orchestra, and it just took off from there!” “What was happening in Williamsburg and Bushwick in the indie rock scene was very similar to what was happening in the salsa scene in New York in the late '60s, early '70s. You have this freaky, experimental, underground thing, with hundreds and hundreds of bands working their asses off developing the music into new sounds, and every band had their distinct sound and people worked at that.”

Born in Mexico, Antonio La Conga was first attracted to salsa from Venezuela, Panama and Colombia. When he moved to New York, he got into the classic salsa from NYC, Puerto Rico and the Dominican Republic. “I’m a popular DJ because, before I was a DJ, I was a dancer, and before I was a DJ, I was a collector. I didn’t just become a DJ right away. I say to someone, to become a doctor, you don’t just start right away, you go to school, it’s a process. You can speak to me about the '60s music, '70s music, '80s music, '90s music, and the music from now, and I’m still buying music, and I always buy original. I have in my collection over 7,000 vinyls and over 7,000 original CDs, from 25 years collecting.”