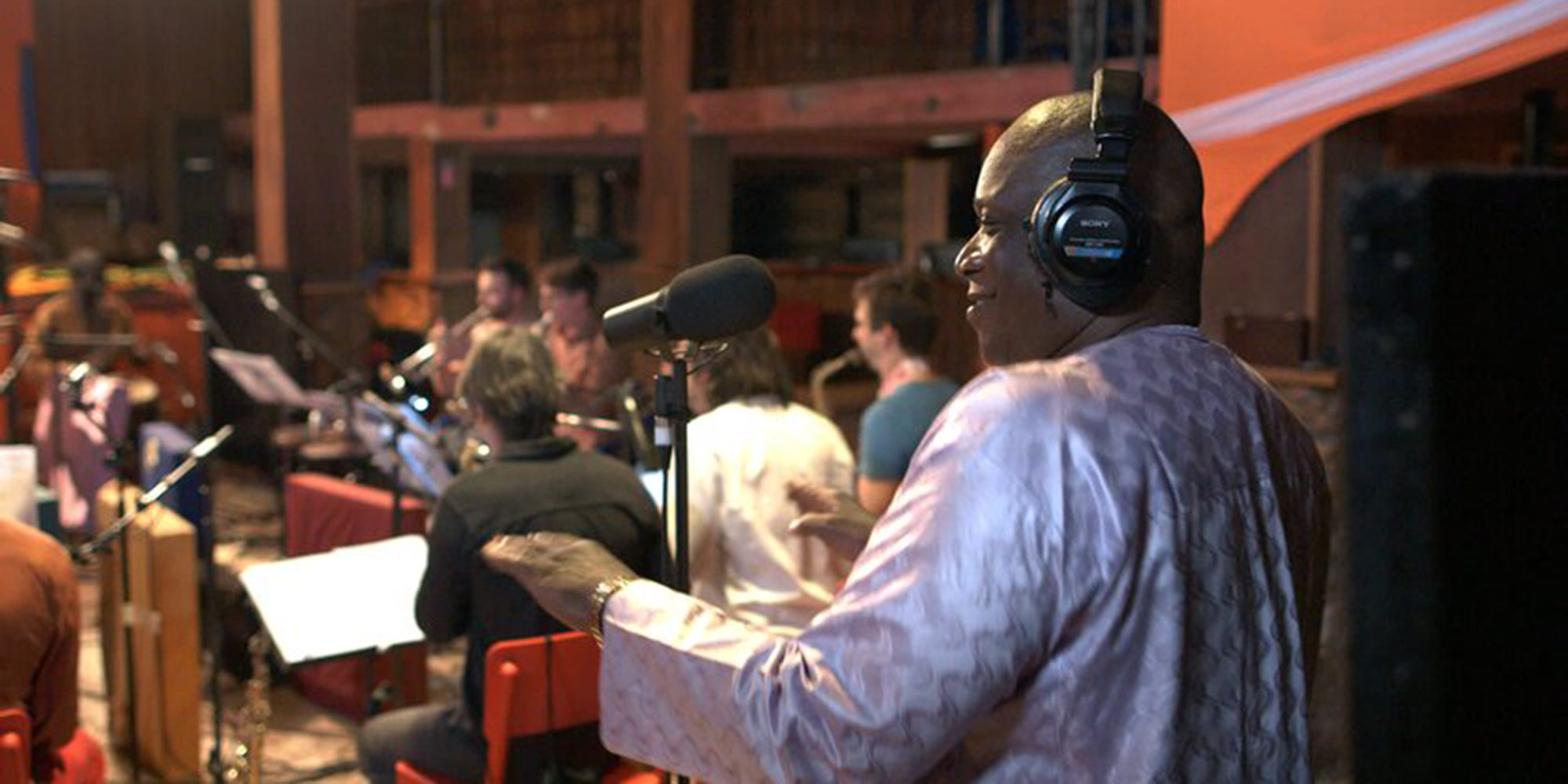 In past years, October has often found Afropop reporters somewhere in Europe at the WOMEX global music trade show and showcase. The 2020 edition, planned to take place in Budapest, held on to the idea of keeping WOMEX an in-person event as long as they possibly could. But ultimately, the reality of the pandemic proved too much, and this enormously complex production has, like so many others, been forced to go virtual. Virtual WOMEX is now underway, and the good news is that anyone can register, for a modest fee, and spend the weekend steeped in the company of artists, producers, promoters, filmmakers and fans around the globe.

One aspect of WOMEX that participants will be able to enjoy over the weeks to come is the film offerings. I viewed just three of the many films on offer and was pleased to find one that is genuinely exciting, and a harbinger of great things to come. First the others…

Marie-Françoise Plissart’s Kinshasa Beta Mbonda (38 minutes) tells the story of a group of poor urban street criminals, kulunas, and how they find salvation through music as the band Beta Mbonda. Mostly they perform with five-foot tall cylindrical drums called tam tam. The film opens with the guys chanting about “Kinshasa, a city full of problems.” Individual members come forward to tell their stories, and the entire premise of the film is revealed. There’s no voice-over other than spoken by the musicians themselves, and even that is fairly minimal. Mostly what we get is a slice of life for these reformed kulunas and their life in music. There’s no real narrative; not a lot happens; but we walk the walk with these guys over what seems to be just a few days.

The city of Kinshasa shows its most unglamorous side here. The action takes place in a poor neighborhood of the city. The highlight of the film is the performance shots—little boys acting as drum stands while their elders perform fast unison percussion pieces, an amazing performance played on broken washing machines and other dilapidated electronics, a game of rhythmic checkers with bottlecap pieces. No happy ending here, just one tragedy (the death of a band member whom we do not meet) but in all, an unpretentious sojourn in a world where music truly makes a difference.

Opiyo Okeyo’s Birth of Afrobeat, despite the misleading title, is a short piece (about eight minutes) on the fruitful collaboration between the late, legendary Afrobeat drummer Tony Allen and the Chicago Afrobeat project. Right off the bat, this film treads into dangerous territory by calling Tony Allen “the creator” of Afrobeat—fighting words for diehard Fela fans—and claiming that Afrobeat is the “most popular” music in Africa—something that has never been close to the truth. It is always a great pleasure to hear Allen play and speak, and to hear even a brief and selective telling of his remarkable story, presented here with a mix of archival images and animation. The testimonies of the Chicago musicians are heartfelt expressions of their understandable gratitude for the experience. But this film cannot deliver what it promises. That is a story for a far more ambitious feature…

By far the best film I sampled is, in fact, not quite yet a film. Director Markus C.M. Schmidt presents over 90 minutes of collected material for an eventual film called Berlin Bamako Allstars. It documents the story of an underground brass band from Berlin who take an interest in old 1970s recordings by the great bands of Mali’s big band era—Super Biton de Segou, Le Kanaga de Mopti and the Rail Band of Bamako—among them. Schmidt is an old Mali hand, and he must have done quite a lot of prep work for this project, judging by the receptions rolled out for the visiting Germans—13 horn players, a bassist, a drummer and a guitarist who arrives in Bamako on a bus from Dakar, his guitar in hand with not so much as a case. This gives you a sense of the gonzo nature of the project. The members of the Omniversal Earkestra are clearly serious musicians. We see them pouring over 1970s Malian vinyl in their Berlin rehearsal space with deep focus and fascination. But they’re also a playful, fun-loving crew, keen to befriend everyone they meet in Mali.

I spoke with Schmidt by phone from France and he told me that the band is essentially a group of friends—all with other gigs—who like to “do arrangements of stuff they just find somewhere.” For the last eight years, they’ve been getting together on Mondays to play these arrangements with little thought of commercial success. As their ears turned to Mali, Schmidt suggested that they might enjoy actually going there and finding surviving musicians of that great era to play with. Schmidt then spent two years chasing down funding: No mean feat!

The core of the film is the intriguing nuts and bolts of accomplished musicians from entirely different worlds, and approaches finding common ground, generally focused on a single song. There are rehearsals, hangouts, informal concerts, and in most cases recording sessions at Salif Keita’s Moffou Studio in Bamako. The arranging of a song Keita wrote for the Rail Band in 1972 at age 19, is particularly intriguing. Apparently the Earchestra’s arranger studied in Cuba, and he hears the clave one way, while the Malians hear it reversed—the old 3-2 vs 2-3 clave dilemma. This disagreement nearly turns ugly, but in the end they go the Malians’ way, and the result is marvelous.

For some of the songs, the musicians are well prepared, having worked out parts and voicings back in Berlin. Schmidt says that Abdoulaye Diabate of Sikasso and Sory Bamba suggested songs in advance so the band could prepare. But naturally, there are surprises. Jimmy Soubeiga of Super Biton greets the band with the suggestion that he has a better song for them, and they have to learn it on the spot, with Soubeiga singing the parts to the players, who later notate them and print charts on a portable printer. Improvisation is a necessary fact of life in Mali.

Schmidt and the musicians are rightly awed by the source material. “They learned it all by heart. And if you listen to the arrangements, they are so complicated! So this just the difference between Afro-engineering and German culture.” That difference is certainly on display in the film, an understated but fascinating subtext.

The Mali footage was filmed in Bamako, Segou and Mopti in February 2019, with awareness but little concern about the country’s much reported instability and turmoil. Schmidt still plans to return to gather more footage for the final film. Meanwhile, there is an album release event of the recordings, which are available here. And the band will perform the songs along with a screening of the film in a virtual event on Nov. 21. Watch this space for details.