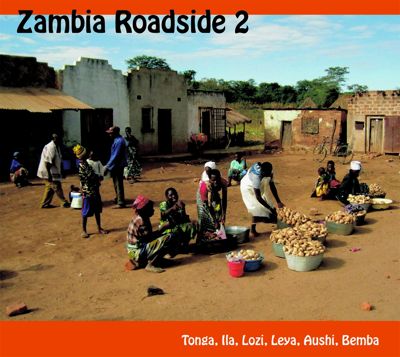 Like the first Zambia Roadside release from SWP, Zambia Roadside 2 exclusively features performances by little-known folk and traditional groups, selected by Michael Baird from over a decade of his own field recordings in rural Zambia. It's taken us a little while to process this album, mostly because it falls somewhat outside the standard purview of Afropop, as in “African popular music.” This record is folk music, reflecting the oral traditions of non-commodified production: people playing for the celebratory and ritual needs of their small, local communities. Example: Track 2, “Kuli Shunga,” is a traditional praise song to the mighty and sacred Victoria Falls (so-dubbed by the British colonizers, obviously), performed by Crispin Mutanuka as part of the Leya female initiation ceremony, which Baird recorded at the local chief’s palace. Other groups play styles such as seesa that, despite using traditional instruments, are relatively recent innovations. Other groups are described as “well known throughout their area, playing at dances and weddings.” If the difference between this kind of music and ‘popular’ music is not yet clear, watch the “Making Of The Album” video below, and compare with these mixes of contemporary Zambian pop music from Zed Beats, or the video of the inaugural Zambian Music Awards from this year.

Despite the lack of ‘pop’ in this compilation, the music contained on this compilation clearly deserves respect and attention, as does Baird’s work in presenting it for us. Baird’s liner notes show his extensive knowledge of Zambian roots music and culture and his commitment to promoting the folk music and musicians of Zambia internationally. For example, Baird brought Enoch Mbongwe Haciwa to perform the kalumbu musical bow at the Royal Albert Hall in London in July 2011. Baird writes: “Hopefully this international attention might mean that there is some money to be made by playing ‘the old music’ and young people will continue playing kalumbu.” That remains to be seen, but Baird seems to be doing his part.

These liner notes becoming particularly entertaining when they cross the boundaries between ethnography and editorial, for example: “Zambia is officially a Christian nation, but I have to say, I have no idea what that actually means.” Or, “This deep instrumental groove is the opposite of panic!” Baird bemoans the international “underestimation” of Zambian ngoma drumming, and, after hearing the lead-drum and whistle combination on “Ndakali Kwetwe” by Haachaanga Sound, we tend to agree! The “buzz drum” on “Chibinda Wanama” and the kalela oil drums are also impressive sonic experiences. The final track, by the blind musicians in Mansa Visual Art Band (named by Baird himself), is the closest to popular African music in terms of harmony and instrumentation, with a clearly Western-influenced guitar and vocal harmonies and a roving babbaton bass—“A self-made double-bass with an oil-drum into which the neck is affixed with four gut strings and covered at both ends with laced cowhide skins.”

So take a break from those Zed Beats and dig into some roots music!