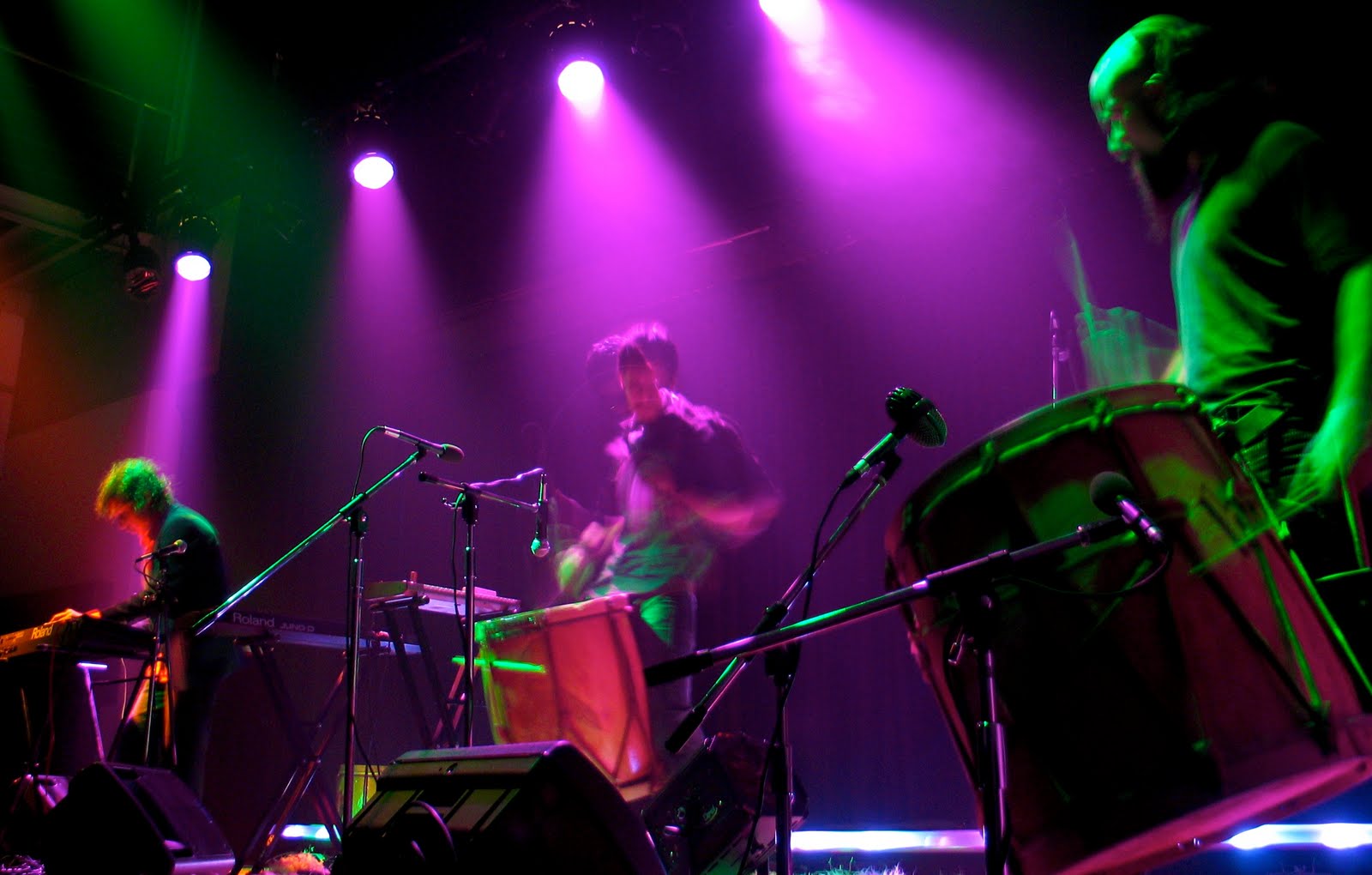 Afropop Worldwide presents a program all about the exciting and experimental music scene in Colombia today. A new generation of Colombian youth are delving into Afro-Colombian roots music, using traditional sounds as rich fodder for 21st-century experiments in global pop. At the same time, musicians and DJs the world over are getting excited again about Colombia’s seemingly limitless musical offerings. (Produced by Marlon Bishop. Originally aired 1.13.2011)

Systema Solar
Systema Solar is a collective of DJs, rappers, percussionists that reinvent cumbia, as well as other Afro-Caribbean and folkloric Colombian styles, through the filter of the local piko culture (that is, Jamaican-style soundsystem performances).

Prolific composer, producer, and singer Humberto Pernett, pioneer in the electrocumbé movement and possessor of a massive afro, fuses traditional elements like gaita flutes and maracas with synthesizer-laden electronic beats.

Malalma are known as the "space cowboys" of Bogotá (Jamiroquai anyone?). Colorful and theatrical in their sound and show, Malalma combines rock and afro-funk – something akin to George Clinton covering Fela Kuti on stage in Colombia.

This project, led by Mario Galeano Toro, unites the diverse cumbias of Latin America with the psychedelic flavors of dub. Frente Cumbiero use new technology to return to their roots and express their identity as Colombians and Latin Americans.

La-33
Named after the street where the group was formed— that's la treinta y tres, not "la thirty-three"— this 12-piece orchestra resurrects the forgotten flavores of old-school salsa dura ("hard salsa"), jazz, ska, classical, cumbia, Henry Mancini (?!), and the Police (?!?!?!). These guys were in this year's globalFEST and got rave reviews from the Afropop staff!

Forming within the underground scene in Bogota, the electro outfit Bomba Estéreo (led by Simón Mejía and Li Saumet) acumulates influences that range from cumbia and champeta to dub and on to hip-hop. In their own words, "it's a mixture of the Caribbean Ocean and the Andes Mountains, with a bit of traffic and some Bogota smog.”

ARTISTS OUTSIDE OF COLOMBIA

Drawing on both traditional Afro-Colombian rhythms such as mapalé and bullerengue as well as a mosaic of American genres—punk, hip-hop, and jazz—newcomer MAKU was founded in 2009 by guitarist Camilo Rodriguez as an outlet for folklore-influenced compositions.

Together for nearly 15 years now, this LA-based group stays true to their Colombian roots, playing an accordion-heavy variety of cumbia known as vallenato. Their live shows may be raucous, but their purist vision of countryside cumbia is a deliberate response to the haphazard fusions so prevalent in "world music."

DJ Sabo (NYC) As a DJ and producer, Sabo works in a large swath of genres: house, Brazilian, cumbia, dub, and hip-hop, just to name a few. He released an excellent vinyl of neo-cumbia beats with the San Francisco-based label Bersa Discos. Besides playing regularly in his home base of NYC, he travels all over the world spreading the gospel of tropical bass.

Paco Mendoza Paco Mendoza describes his music as a merger of the Latin soul of José Feliciano, Marley’s uplifting idealism, and the street smart of hip-hop. Born in Argentina to Peruvian and Paraguayan parents, he now works in Europe as a soundsystem DJ, producer, instrumentalist, and singer.

ZZK (Argentina) Initially an artist collective born out of the Zizek Club nights in Buenos Aires, Argentina, ZZK became a record label focused on mixing the sounds of rural South America with an urban, global, and electronic production. Since, they've rose from the underground and put out numerous LPs, Eps, mixtapes, besides featuring artists on SXSW, Coachella, Roskilde, Trans Musicales de Rennes and other festivals.

Quantic and his Combo Barbaro (England/Colombia)

Quantic (a.k.a. William Holland) is an English musician and producer living in Cali, Colombia. A chief instigator of London's broken beat scene, Quantic's eventual fascination with Colombia led him to create his Combo Barbaro, an outlet for fusions of Colombian music with deep funk and soul.

Formed in 2000 in Austin, Texas, this funky Latin orchestra performs relentlessly and has built a reputation for their energetic shows. They also routinely back Prince.

Fantasma started in 2001 as a project of Martín Roisi and Pablo Antico (aka Fantasma (guitar/vocals) and Mr. Negro (rap/MC). Borrowing from the shanty town atmosphere, they migle tropical cumbia styles with hip hop and electronic sounds. The also act as a multi-disciplinary group composed not only of musicians, but filmmakers and digital artists as well.