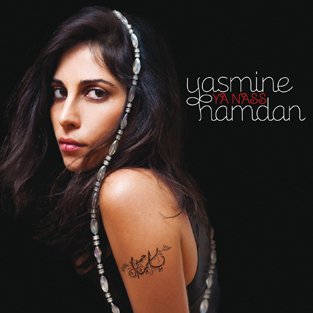 Yasmine Hamdan's music has never been tied down by time or place. Soapkills, the band she led with her then-husband, built from the blueprint of American and British alternative music of the '90s to create a unique style that was well ahead of its time-- especially for a Beirut music scene that didn't know what to make of it. Now that she has settled in Paris--after a life of extensive travels from Beirut to Abu Dhabi to Greece to Kuwait and back to Beirut--Yasmine has turned her attention toward the classic Arab performers of the early and mid-20th century. On her debut solo album, Ya Nass (available from Crammed Discs), Yasmine offers a “punkish” (as she put it in an interview with Afropop senior editor Banning Eyre) twist on a musical tradition that, although immensely popular in its day, has long since drifted out of fashion among younger generations.

That isn’t to say that she has completely abandoned her more modern proclivities. The album-opener “Deny” recalls PJ Harvey, an admitted musical idol of Yasmine’s back in her Soapkills days.  “Deny” describes a prayer for a lost lover backed by spare acoustic guitar, as Yasmine prays to the moon to bring back her lover’s smell.  And although Yasmine sings with more a more subtle heartache than Harvey, the grief sounds no less real.

A tinge of sadness pervades the album, even on songs with ostensibly cheerful subjects. “Samar,” which has perhaps the album’s most infectious melody, with multitracked vocals twisting over a vintage drum machine. On the song, Yasmine sings about a woman waking up after a night spent with her lover, but her voice carries as much melancholy as it does sweetness. Watch that song's trippy video below:

Among the lyrical influences on Ya Nass are classical Arabic singers, who encountered difficulty reconciling their musical careers with their backgrounds as minorities and women--at once hugely popular stars and to an extent outsiders to the dominant culture. Yasmine, whose own career has always made her something of an outlier, seems to draw strength from these models. Recordings of Asmahan (featured in our Hip Deep program "Cairo, Hollywood of the Middle East"), a popular Arab singer of the '30s and '40s, initially sparked Yasmine’s interest in music from this time period. Born to Druze parents, Asmahan immigrated with her family to Egypt where she became a wildly popular singer, but was alienated from the Druze community for her choice in career. Leila Mourad, whose song “In Kan Fouadi” Yasmine covers on Ya Nass, was an Egyptian of Jewish descent who, although named the official singer of the Egyptian revolution in 1953, faced accusations of treason because of her background.

Yasmine sings in various Arabic dialects, further drawing attention to the diversity within the Arab world. In “Nediya,” Yasmine sings in the ancient Kuwaiti dialect over chilled electronica reminiscent of Portishead. When she turns to her original home of Lebanon, she sounds both nostalgic and frustrated with the country’s political situation. On “Bala Tantanat,” she sings in Lebanese Arabic accompanied by twangy guitar, “We met the leaders and representatives/They’re taking us down with no reserve/Spiraling out of control.”

Yasmine has also recently made her first film appearance in Jim Jarmusch’s upcoming vampire movie, Only Lovers Left Alive, joining an illustrious crowd of musicians featured in other Jarmusch films: Tom Waits, Iggy Pop, Screamin’ Jay Hawkins, RZA and GZA, among others. “Hal,” which she sings in the movie, is also included on Ya Nass. Like many of the songs on the album, “Hal” is also about longing for an absent lover, though in this case the narrator is an insomniac female vampire. She sings the song with swirling Gnawa accompaniment from a krakebs player. Although Only Lovers Left Alive hasn't yet been officially released, you can watch Yasmine's scene below:

Like other artists who have made Jarmusch film cameos, Yasmine has an unmistakable individuality and an unself-conscious cool. It’s well worth spending some time in her universe, which has room for both historical awareness and love-torn insomniac vampires.