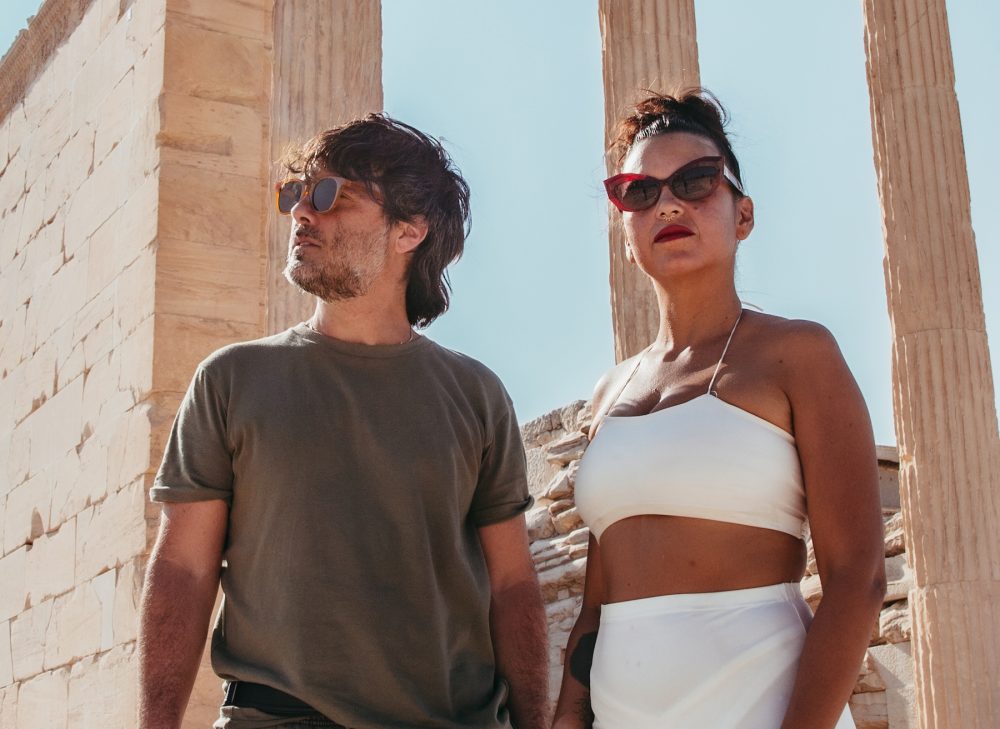 Colombia’s Bomba Estéreo mixes together Afro-Colombian folk sounds with modern electronic pop to create potent, perennially Latin Grammy Award-nominated music. The group’s latest single, “Tamborero,” is an electrified homage to the organic sound of those Afro-Colombian drummers, and the accompanying video is fittingly a slick electronic homage to the natural world. It seems to answer the question “what if Pixar’s Wall-E finally said ‘enough is enough’?”

Afropop’s Ben Richmond called up Bomba’s founder, bassist, keyboardist, composer—and now video director—Simon Mejia to talk about the video, the song, the album and Bomba’s plans for the future.

Ben Richmond: I think we last spoke about a year ago, for your solo project. Since then we have a whole new Bomba Estéreo record to talk about. Congratulations on getting that out. Why don't you tell our listeners who maybe haven't had a chance to check Deja out yet what they can expect on this new one?

Simon Mejia: Well, they can expect a bit of an evolution in the music. We did the album and had plenty of time to finish the album because we finished recording before the pandemic, but then had all the pandemic and quarantine time to mix it. [Laughs] So it was quite good for us. And there's this beautiful concept that we developed for releasing the album in four moments, like the four elements of nature. So we "released it" in four separate times, each with three or four songs. First we released the water element, then the air element then earth, then the last one was the fire element. And why? Because we've been developing this concept around creating a connection to nature through music and rebuilding this lost connection that we human beings have with nature. We think that music is a powerful way of communication to do that.

You've definitely had an environmental theme in both your solo work and in Bomba's work over the last few years. What’s led you to that?

Just looking at what's happening in the world and feeling that music is a powerful instrument of communication. As people who live in Colombia, are from Colombia, a country that is really threatened. It's a country with amazing and natural and energetic environmental spots, but at the same time they're really threatened by all the social and political war and drug trafficking situations we have here. These places are threatened—the Amazon jungle, the jungle in the Chocó, all the mountains, the Sierra Nevada de Marta—all the beautiful spots that we have here in Colombia are today under threat. So we as Colombian artists feel some responsibility to use our music—not in a discursive way, but in a more sensitive way—to reconnect and make people feel that if nature ends, humanity ends. So that's basically the message we're trying to bring forward.

I think you put it really well when you said you try not to be too "discursive" or scolding, because you've got such an appealing pop sensibility running through this album. There's also a lot of great organic sounds on here, especially the drums.

That bring us nicely to the new single and video you're releasing, "Tamborero."

Yeah especially because "Tamborero" translates to "drummer," a traditional drummer here in Colombia. We have this big African tradition of drumming brought by the slaves who came here in colonial times. They brought the drums and the drum tradition to Colombia and that tradition, mixed with the indigenous music that already existed here on the continent, brought forth all the folk music that we have today, cumbia is the most famous one. It was born from that blend of African drummers and indigenous music. So "Tamborero" is a song about those traditional drum players. We are fortunate to have one of them in the band, Pancho Carnaval, he's the drum player of Bomba Estereo. He's a folk musician who plays the drums and the flutes and he sang this song on the album, which is a homage to the traditional drum players. It has this amazing drum pattern blended with the synthesizers and electronic beats and everything and the song is a homage to the players and traditional drums here in Colombia.

The video is very striking as well, can you talk about that?

With the video we tried to make something different. The idea was to make something like a video game, because I'm seeing my kids playing video games all day, so I wanted to talk a little bit about that. That was the origin of the idea. Because the synthesizer on the track sounded, to me, kind of like a video game, just really electronic. So I started talking about these ideas and I met this guy from Ecuador, a 3D designer who had this design of a jungle robot that he designed and never used for anything in particular. I got the design and started thinking about ideas and I came to this idea of the drum and the drumming saving the world, a totally destroyed world saved by music and by the drums. Then we worked with another friend of ours who is a motion artist and we developed this whole history of this jungle robot who is in this end-of-the-world scenery more or less, who has to find something to bring back life to Earth. And that thing is the drum, the Afro-Colombian drum. So it's also like a homage to the drums in the video.

He sees this totem in the glowing stone, is that drawn from African or indigenous imagery?

It's a mixture because the drum is African-rooted and the stones are indigenous. So it's a blend. The video has a mix of imagery and symbols. For example, like I was saying in the earlier question, the last element we released was the fire element. And this song is part of the fire element. Fire is what destroys the world but at the same time, if you see the heart of the robot, it has the symbol of fire. And he gives his heart to the stone that is a symbol of fire, and that fire in the heart is what releases the drum to the sky. There are hidden symbols also in the video and references to different things and movies and different concepts to tell the story.

It's very cool. I don't think I've seen a video of yours that is anything like that before.

Yeah, we try to do something different. I was talking to my friend and I was like "we should do something different." Especially because the whole idea for the video started with a video game and we never did anything close to video game aesthetics. Everything was intended to be different to explore this environmental concept and the music and our traditions. It's a really special video. I think it's really beautiful and it conveys a really beautiful message as well.

Congratulations on getting that out. Do you have any shows coming up or any touring?

We have two shows here in Colombia in December; we have one show in Medellin on Dec. 3, and one in Bogota on Dec. 7. And then we're planning for touring by the summer of next year when everything calms down a little bit.

Well, we were saying that last time we spoke, but I'm feeling better about this one.

Anything else you want Afropop listeners and readers to know?

You've given us a lot! It's a great record; congratulate the rest of the band for us and let's talk again soon?

Thank you, thank you very much.