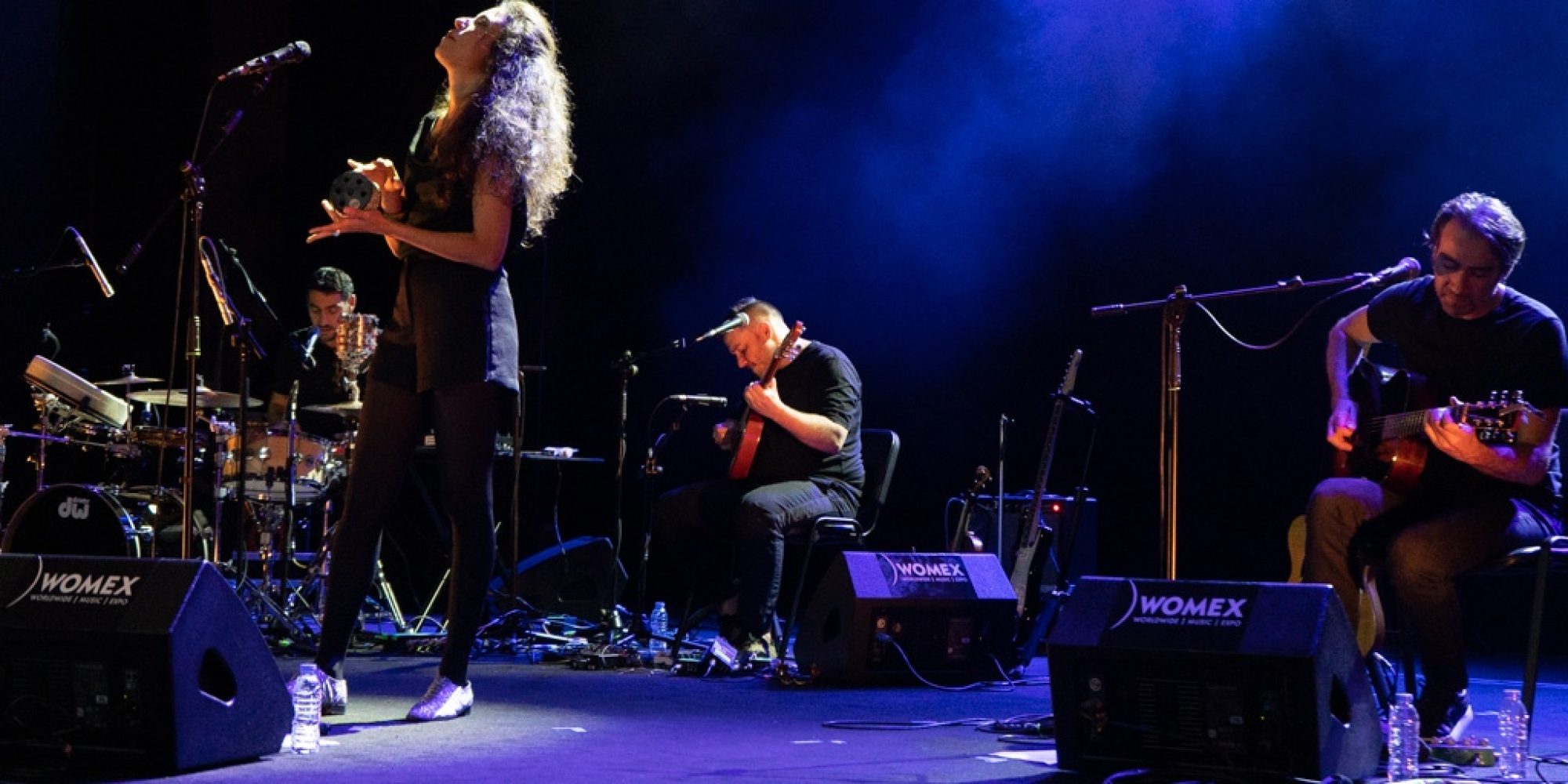 Features November 21, 2022
Djazia Satour: On Finding Her Voice and Giving Voice to Others

One of the outstanding performances at this year's WOMEX conference, held in Lisbon, Portugal in October, came from French-Algerian singer Djazia Satour. As she sings, plays guitar and dances, you quickly realize you are witnessing a professional who is in command of not only everything happening on stage, but as well is holding the entire audience under her spell. Djazia's journey to earn that degree of confidence and musicianship started when she began her professional stage career at the age of 15.

“You have all the informations,” she laughs deeply in response to our familiarity with her origin story.

Before the interview, Djazia had said it was fine to ask questions in English, but that she would prefer to respond in French. But as she grew more comfortable in the interview, she would dance between the two languages.

Born and first raised in Algiers, Djazia's family relocated to Grenoble, France as she entered her teens. “So yes, I started performing when I was 15,” she says. This opportunity came about because her half-brother, Amazigh Kateb, lead singer of Gnawa Diffusion – the long-internationally popular group that blends North African and Western sounds – invited her to be a part of the band while she was still in high school.

“I was always singing as a child,” she continues. “Music was this special thing that represented, you know, hopes. Music was like a drug for me. It was very special. I didn't analyze it at the time, but now I can put some words to what I felt then. Little by little, I started to engage with the music I was hearing in France. At that time, I was listening to things like Björk, hip-hop, Oumou Sangaré, and,” she adds, laughing, “of course, also my brother.

“When I was in Algeria, when I was a very little girl, we heard Elvis Presley and the Beatles. But when I came to France at nine years old, discovering Michael Jackson was a very important memory. I still remember the day I saw him for the first time. He made a click in my head. It might seem banal to say that, but in that little heart of that little girl it was absolutely incredible. Especially in his relation with the stage and music. Michael Jackson was my first influence, so much a part of my teenage experience.

“So, I can say, my brother discovered me, and he didn't just invite me, he said that 'you must come and sing with me!' I love my brother. And my parents actually encouraged it, as long as I finish school. There were tours, recording in studios – so I already had a chance to discover the professional world at that very early age. Step by step, the confidence came from these experiences.”

Djazia followed her parents' wishes and started at university, pursuing her other passion, economics. But she was also waiting for a good musical project to involve herself with. And that came when two French musicians, Piero Martin and Mathieu Goust, approached her and they formed the trip-hop group MIG in 2000, arriving along with other notable French trip-hop artists of the time, like Air and Wax Tailor.

“It was so beautiful,” Djazia remembers. “And it got me to stop my studies and devote myself fully to music. But I didn't know what this ‘trip-hop' was at first, which is what was so attractive about it – that I didn't know it. But I wanted to get to know about it. For me, the originality of the project came from the mix of electronics and singing in Arabic.”

“We started to have some publicity in France, got very good feedback in media, and they would ask me about trip-hop and I didn't know what to say at first,” she laughs.

The trio produced three LPs, starting with a self-titled album in 2001, followed up by Dhikrayat in 2004 and Yamatna in 2006. The albums don't feel dated, and there are some interesting covers, including Jeff Buckley's “Everybody Here Wants You.” In fact, Djazia still includes a couple of songs from this period in her live show: “Dhikrayat” and “Nirane.”

When MIG dissolved, Djazia felt ready to pursue her own projects. She released her first EP, Klami, in 2010, and a full LP, Alwâne, in 2014. On both albums, Djazia goes for an acoustic alt-jazzy folky sound mixed with a North African vibe that works for her. But at the same time, one feels her striving to find and define herself.

“Looking back on my solo work,” Djazia recalls, “it's been a process of coming back to the sources. As I started my journey, I was very inspired by many genres and I had this desire to do one album in each. I am exaggerating here, but what is really inspiring is the spontaneous fusion when you listen to different things and come up with ways of mixing them with your own sensibilities.”

With the release of her 2018 album, Aswât, Djazi has totally integrated her musical cultural roots with all the other influences she has accumulated until now.

“I was looking back all the way to childhood,” she says. “And as I was home soaking in things like chaabi, Algerian, and other Arabic genres, these influences started emerging and especially the desire to sing in Arabic. Previously, I sang in a mixture of languages, but here, on Aswât, I'm singing all in Arabic, so it feels more coherent. I'm also using many traditional instruments from Algeria, like the banjo, mandol, and the bendir. I love the bendir.” she adds, “I've learned to play it over the last two years.

“So there is like this red thread that connects the whole album and because of the musicians and instruments specifically chosen for this album. For example, the song “Loun Liyam” started with two or three chords I played on the piano and spontaneously a melody came to me, which I realized was in the mode of a chaabi which surprised me. And that set the direction for the whole album.”

“Aswât means voices,” Djazia explains. “Voices," in general. Voices, in an undefined manner. Nowadays we have too many voices around us – what with social media and the media in general. So maybe when we are so overwhelmed with voices we stop being able to process and filter them. However, there are some voices that can reach us. That these messages reach us is not always connected to the exposure the media is giving us.”

“For instance,” she continues, “some may touch you in a personal way because of the shared history you have with them. We have to filter these voices through our own life experience and life story. In my case, there is French colonization which my parents lived through. And this is one of the things that touch me personally. But you can also be sensitive to those voices just by being a human being.”

“Take the song 'Taleb Laman,' which means 'refugee' in Arabic. It's like the inner voice of the refugee – the thoughts and feelings he may have when he arrives in Europe. This inner voice is giving him some advice about what to say or not to say – like don't use the word 'exile,' or that your country is in ruins. Say that you are just a simple traveler and not here to take the place of another citizen, and that you will be here for a while but some day will go back home. You know? Because Europe is afraid of people who need help. For example, you can see that while it is true that Ukrainians are truly in need of help, they are supported differently than some other refugees. There is an inequality that I see.”

Djazia gets mysterious for a moment as she tells us that for the album she collaborated with an author to come up with the song ideas, but she says with a laugh that his identity must, at least for now, remain anonymous. Though, she did explain some of the process: “The way we worked,” she says, “is we talked about a certain theme and then he would write the story that I would make the song.”

Djazia has just dropped a new single that is calling forth yet another marginalized voice, this time from America's past. “The song,” she says, “is called 'Zintkala' or 'Lost Bird from Wounded Knee’, and is the story of a baby girl who was a survivor of the battle at Wounded Knee.”

It's based on a true story about this Lakota Indian child who was taken in by a U.S. general but, Djazia explains, her life was full of hardship and she died quite young. Finally, in 1991, she was reburied amongst her people. “The song is tribute to all who have been victims of the brutality of Western civilization.”

We couldn't let her leave without bringing up how much we loved her showcase. “Quite often people forget that the show is itself also a piece of work,” she tells us. “I am very proud of the musicians in this band. They are so tight because of the time we've spent together. Thank you.”

Djazia Satour is currently finishing her next album which will be released some time in 2023. 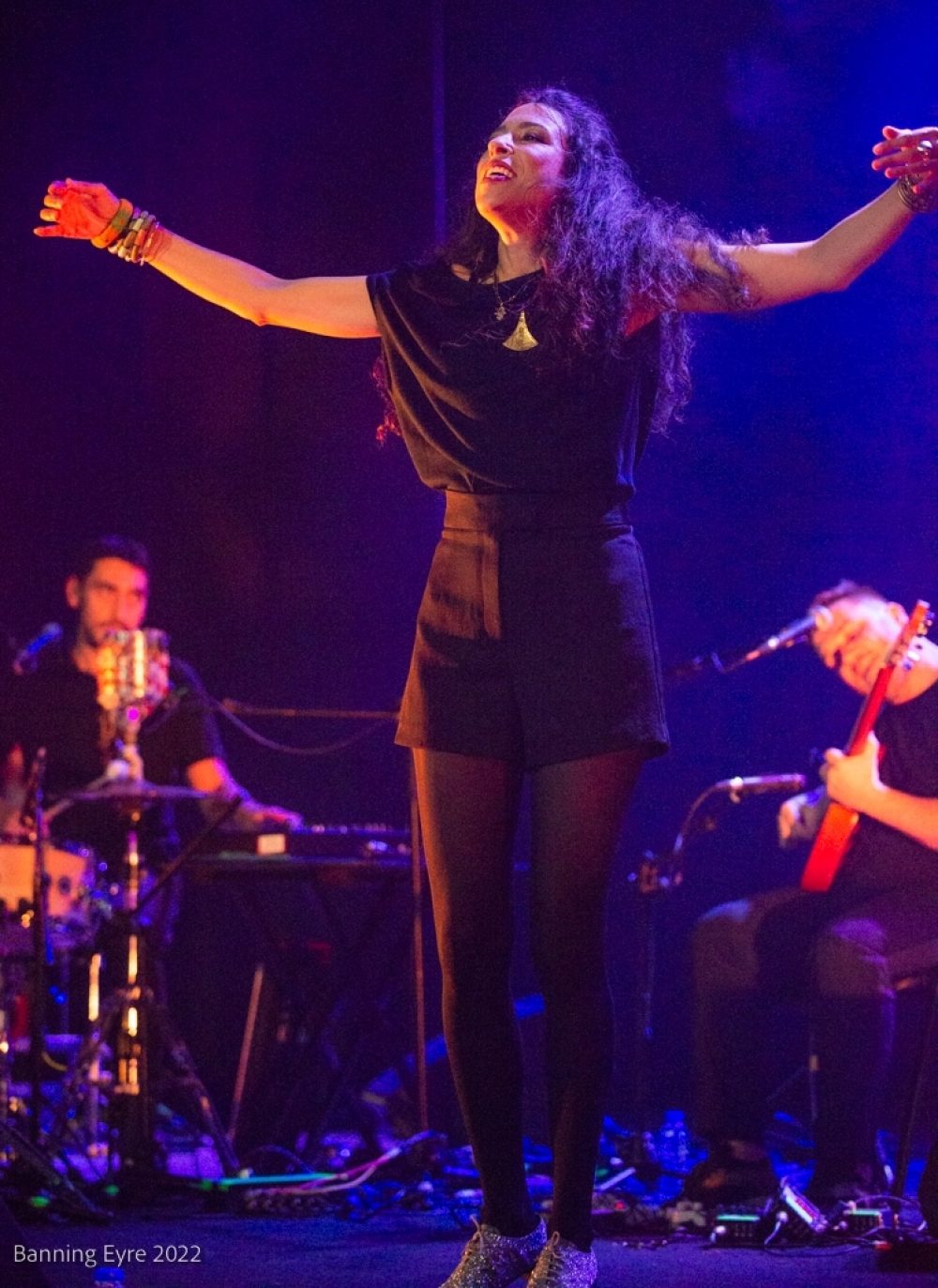