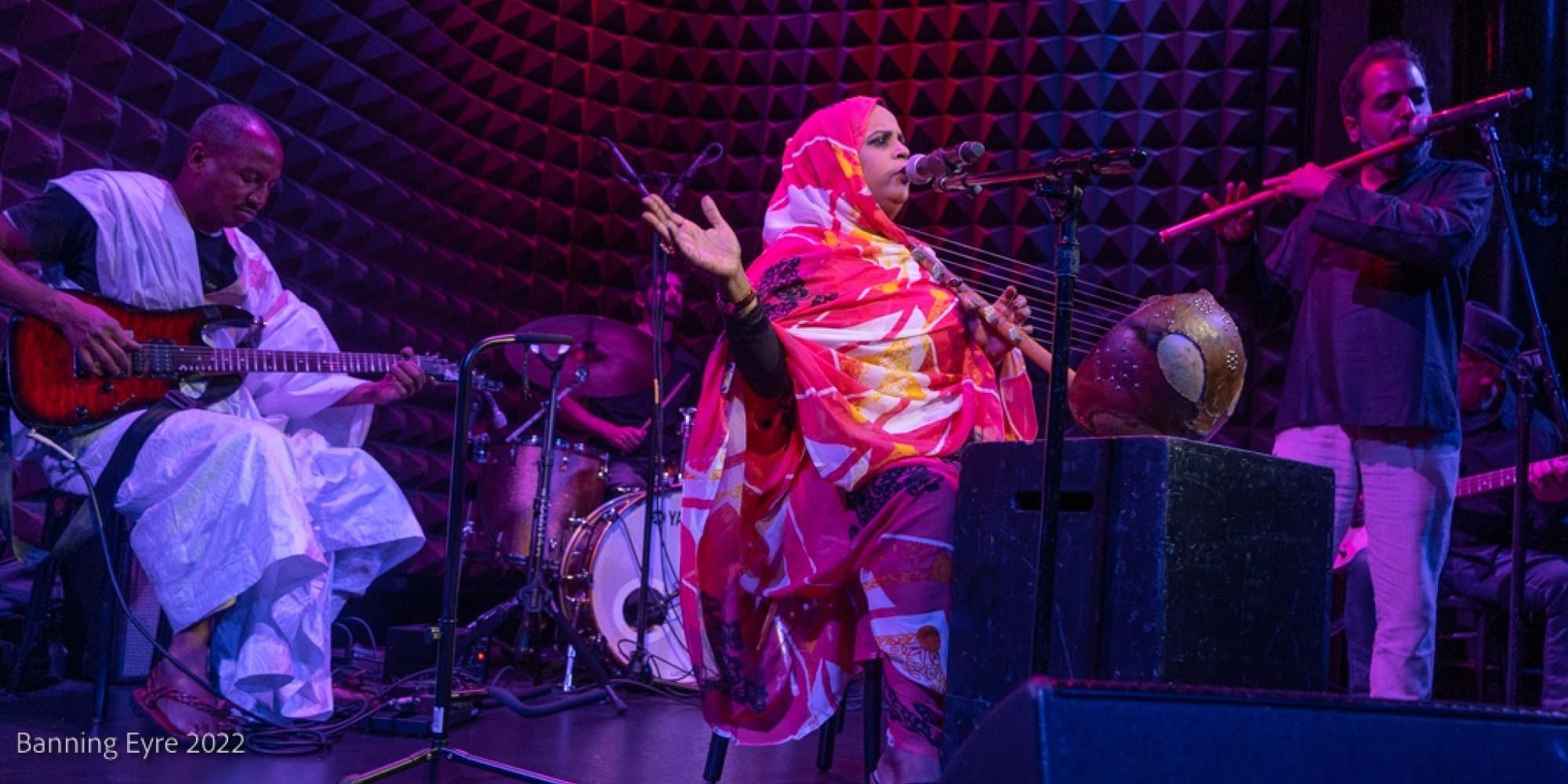 Afropop enjoyed a night out at the Habibi Festival's second edition at New York’s Joe’s Pub, Oct. 11-15, 2022, featuring a number of U.S. premieres, showcasing contemporary and traditional musics of the Southwest Asia, North Africa (S.W.A.N.A) region. The festival organizers decided to contain the festival within this paradigm of S.W.A.N.A, a decolonial word for the South West Asian/ North African (S.W.A.N.A.) region. It is an identifying terminology in place of Middle Eastern, Near Eastern, Arab World or Islamic World that have colonial, Eurocentric, and orientalist origins and are created to conflate, contain and dehumanize the peoples of this region. The curators use SWANA to disrupt the conundrum of former colonial identities and speak to the diversity of their communities to forward the most vulnerable in their multiple liberation movements. Ironically the new term and re-naming of the region, as a path towards decolonization bleeds across borders through music, that evanescent commodity that knows no borders, no beginning or end.

The Habibi Festival aims to take listeners on “a journey of the sounds wafting through the airwaves and living rooms of cities spanning Marrakech to Baghdad” according to the festival website. This new performing arts festival is a collaboration between the director of Joe's Pub at the Public Theater, Alex Knowlton, artist/composer/curator Yacine Boulares, and curator/producer Meera Dugal who successfully managed to mount another sold-out festival, highlighting a spotlight on the ever expanding region. In one night we witnessed two vastly different bands and vocalists, giving us a taste of the diversity of genres, breaking every stereotype you may have had about music from the region. The festival, while secular in nature, say the festival organizers, “gives artists the space to engage directly or indirectly with the intersectionality of Arab and Muslim identity via their performance and complementary salon events.”

We were there on the final night to catch the last acts on Oct. 15 and we witnessed for the first time Bedouin Burger, a Paris-based duo seamlessly intersecting Syrian and Lebanese folk with pioneering electronica, and Noura Mint Seymali, a nationally beloved star and one of Mauritania’s foremost musical ambassadors. Bedouin Burger performs a combination of instrumentation that includes creating and looping live vocals with nostalgic Syrian and Lebanese folk melodies. This combination of remixes, mash ups with club-worthy rhythms, brings together the sounds of Bedouin nomads with the improvisation of jazz. It can be described as music coming out of their experiences as global nomads, picking up traces of sounds collected from world travel from those who come from a very exploited region of the world, where melodies from the past offer comfort and strength with an edginess necessary to face the many challenges of the region.

The Bedouin Burger duo is multi-instrumentalists and create music with a fluidity illustrating their eclectic musical influences predominantly through the flute and keyboard. This two-person powerhouse of a band is made up of Syrian vocalist, composer and musician Lynn Adib, and Lebanese underground trailblazer, music producer Zeid Hamdan. Bedouin Burger shared their musical memories in a labyrinth of sounds and emotions, sometimes heavy and deep but ultimately a mix of familiar sounds, most appealing to exiles living in New York and needing the special kind of comfort that live music from a homeland provides. It was a night filled with participatory moments where the crowd would spontaneously erupt in clapping and “Allahs,” showing reverence and appreciation to a specific lyrical progression. Their repertoire would break from a solid Bedouin groove to silent respect for Lynn’s mournful,melancholy vocals and flute playing. The echoes of the traumas of yesteryear and today, laced with classical Arabic poetry make this unique duo timeless and ageless. A total surprise to me was their humility and musical accessibility as performers, never precious or demanding of anything from the audience but a good time.

The night took us to another unexpected high through the gifted Noura Mint Seymali, who was born into a prominent line of Moorish griots, West African praise singers, poets and musicians. She began her career at age 13 as a supporting vocalist with her step-mother, the legendary Dimi Mint Abba. Noura’s vocal training also included instrumental and vocal technique from her grandmother, Mounina, who mastered the ardine, a harp reserved only for women. Blessed with this musical lineage, singing at weddings with family, gave her a solid foundation that has lifted her to the heights of musical royalty that can only be claimed by very few anywhere in the world. Seymali Ould Ahmed Vall, Noura's father, was similarly an important teacher, himself a seminal figure in Mauritanian music who adapted music for the national anthem, devised the first system for Moorish melodic notation and composed many works popularized by his wife, Dimi. Seymali encouraged Noura’s compositional talent and influenced her earliest experimentations with fusion music. Raised in this rich musical culture where sounds from across the ancient trade routes meet at the confluence of the Sahara, the Magreb and West Africa, Noura Mint Seymali is without a doubt one of the most exciting artists coming out of not just Mauritania, Africa or SWANA, but the world. Her husband Jeich Ould Chighaly’s adds more fuel to the fire through his original genres of blues, rock and roll and psychedelica guitar licks. Mauritania’s premier bassist Ousmane Touré was missed but replaced by a last minute local New York bassist Tony Maimone, and drummer/producer Matthew Tinari, with special guest Jay Gandhi on the bansuri flute, who combined as her band. They were able to whip up the crowd into spontaneous standing ovations, clapping of hands, laughing, shouting and asking for more.

The other bands highlighted in this year's festival included Bnat el Houariyat and Esraa Warda, Zahra Alzubaidi, Yacine Boulares’s Night in Tunisia, Firas Zreik, HAT, and Nour Harkati. Habibi Festival was sold out again this year, so mark your calendar for next year and support the great music and opportunity the curators are making for musicians and audiences from the southwest Asia and north African region. Mabrouk! Congratulations to all.