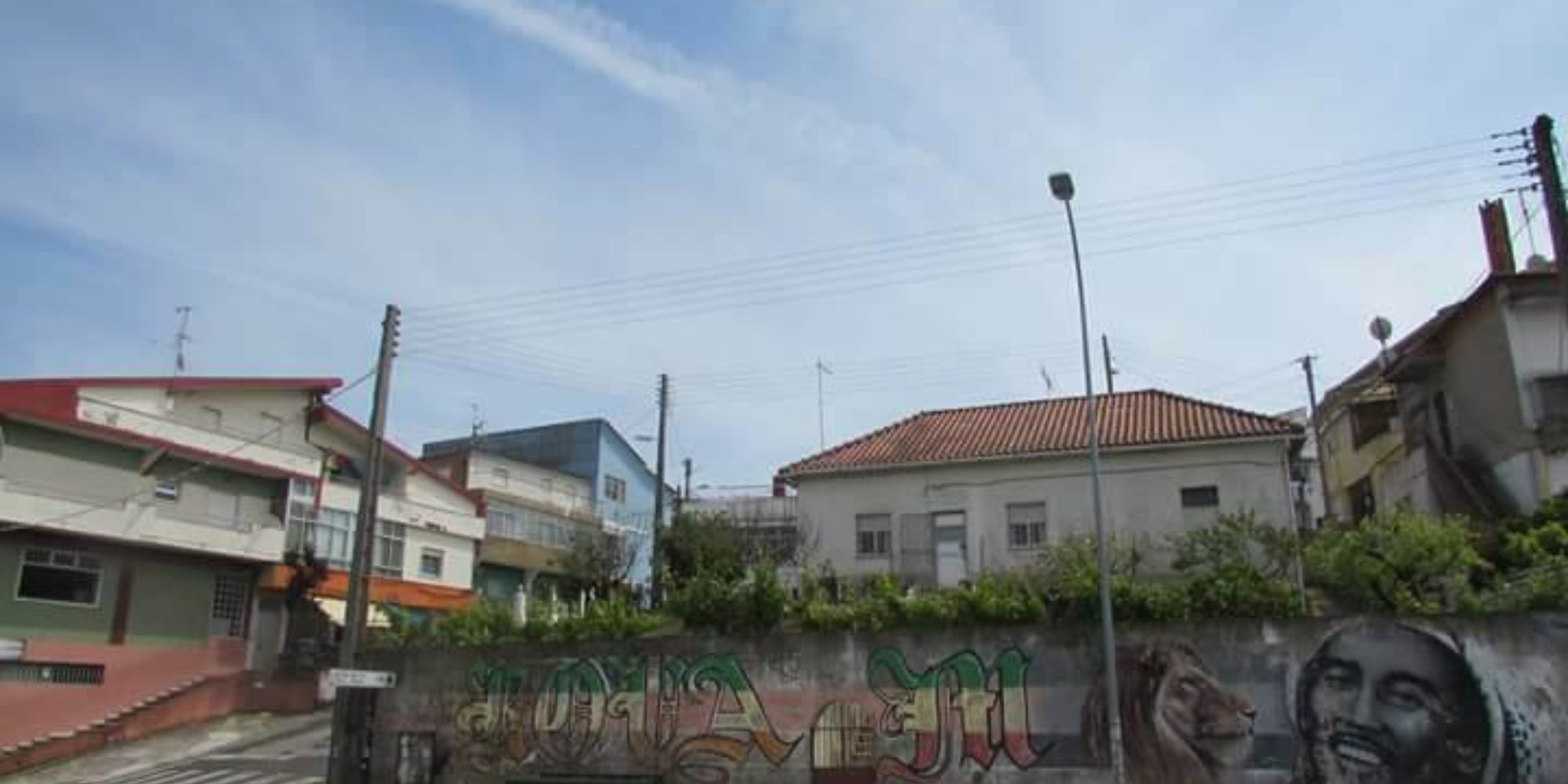 On a hill in the northern suburbs of Lisbon, Portugal, sits the neighborhood of Cova da Moura. Only a highway and a forest park separate it from the city center, but it could be an ocean away. Kova M, as its residents call it, was built in the 1970s by immigrants from former Portuguese colonies in Africa, mainly Cape Verde. It is a community in the truest sense and it brims with life. Cape Verdean kriolu, not Portuguese, is the lingua franca, and funana, kriolu rap and Afro-house dominate the streets. As our guide, Mima, said it: "It's a normal place to live...[but] it's like this piece of land doesn't belong to Portugal."

In our recent Afropop Closeup "Nha Mundo: The Sound of Cova da Moura," we visit the neighborhood and talk with some of the people working at the pioneering local community center, Moinho da Juventude. We meet Mima, who guides tours of the neighborhood for visitors from around the world, in an effort to shift the negative narrative foisted upon Kova M. We speak with Julia Carlinho, a Moinho administrator, and Walter Fortes (A.K.A. Cegonha), who runs Moinho's Kova M Studio.

It's a free-to-use music studio that has become a voice for the neighborhood and a launchpad for an abundance of young talent. In it, the youth of Kova M turn out potent rap and Afro-house and produce their own music videos. In doing so, they speak their truths of living in a neighborhood harshly kept in the margins of Portuguese society. Listen to our playlist of kriolu rap from Kova and other Lisbon suburbs to hear what's up.

You can check out more about Moinho da Juventude here. If you're in Portugal, go visit, take a tour with Mima and lend your support to their programs. 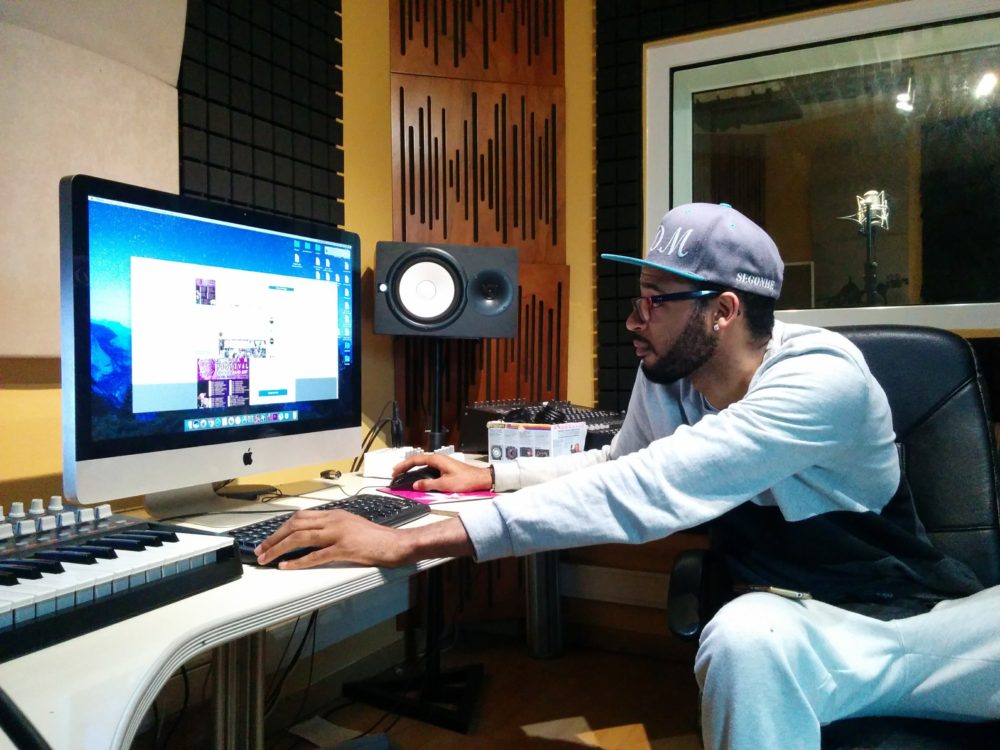 Walter Fortes, A.K.A. Cegonha, in the Kova M Studio. Photo by Sebastian Bouknight 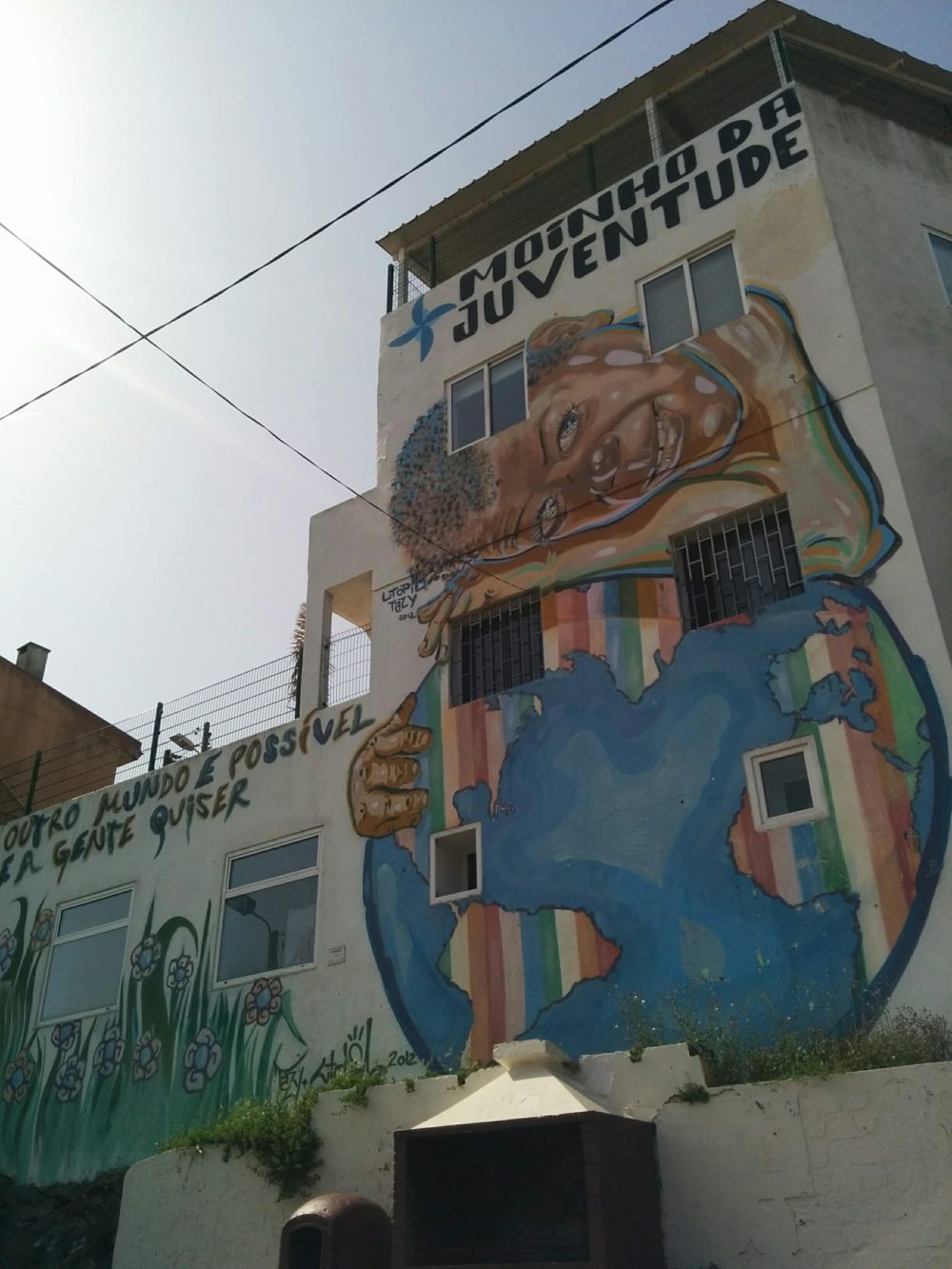 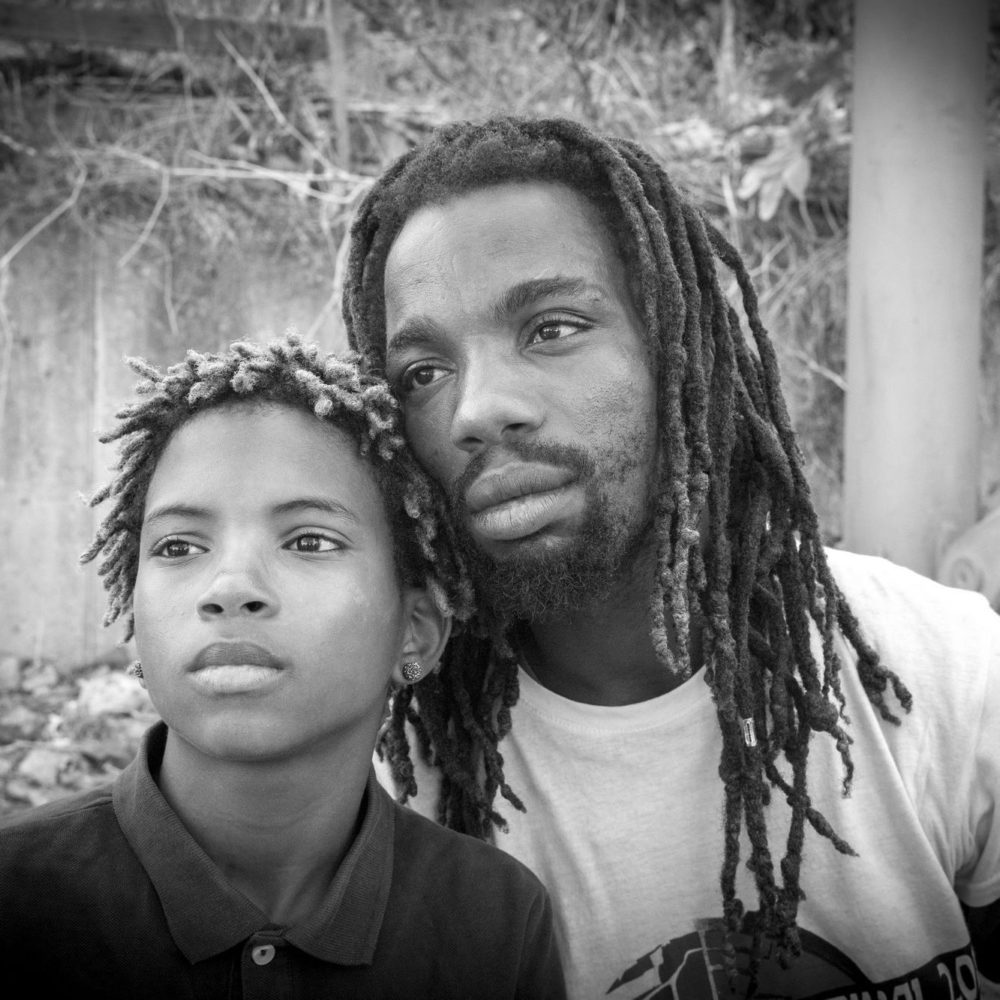 Mima, our guide in Cova da Moura, with his son.

Mima told us, "Normally, people from here create a lot of crazy things. They can do it." This includes music videos shot on cellphones, an abundance of great music and the annual Kova M Youth Festival. For eight years running, it has featured several days of music from across the PALOP world (Portuguese-speaking African countries), dance workshops, soccer tournaments and much more. All of the artists come from around the Lisbon area and perform for free. It's an vibrant focal point of the year in Kova, hosting people from all around Lisbon. The 2018 edition of the Kova M Festival just wrapped up. Follow their Facebook page to keep up with their future events. 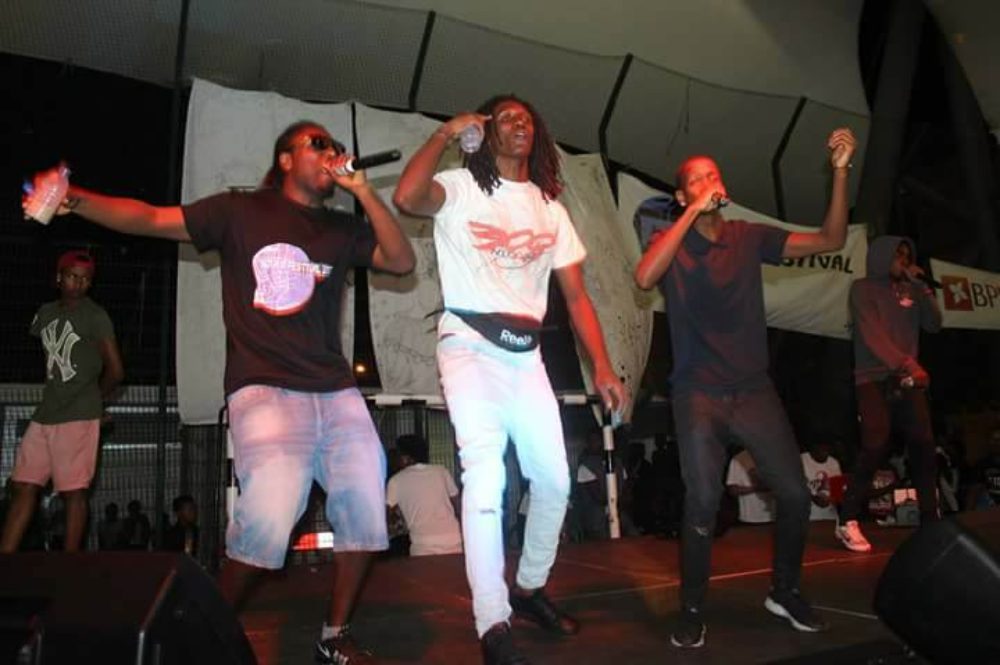 All of the following pictures below were shot by Roque G, a young rapper and photographer from Cova da Moura. Through his eyes, you can get a sense of life in the neighborhood--the Kova M fest, families, friends hanging out, the cafes and clubs that play music on the weekends. 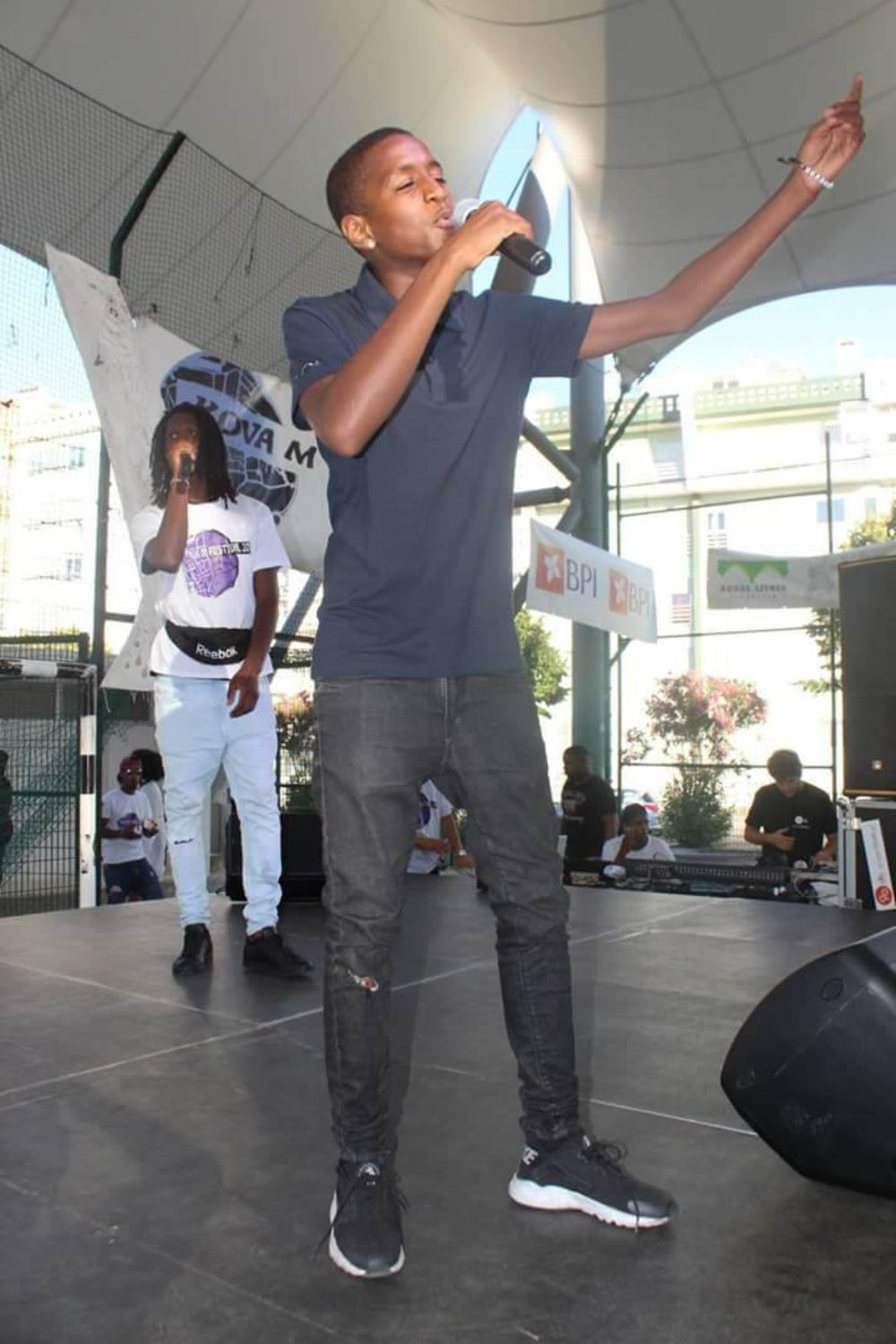 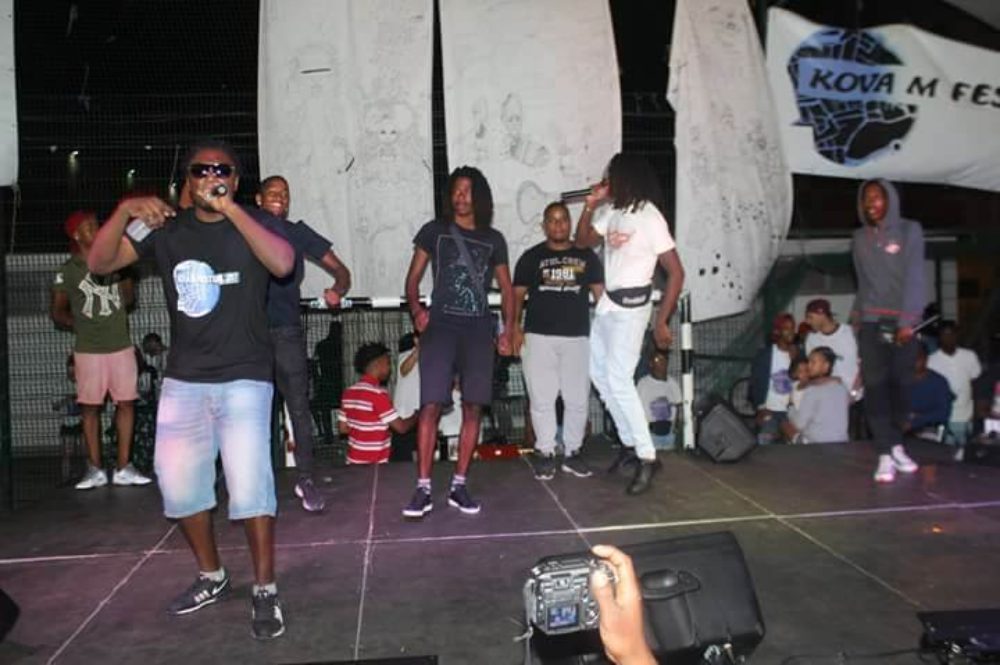 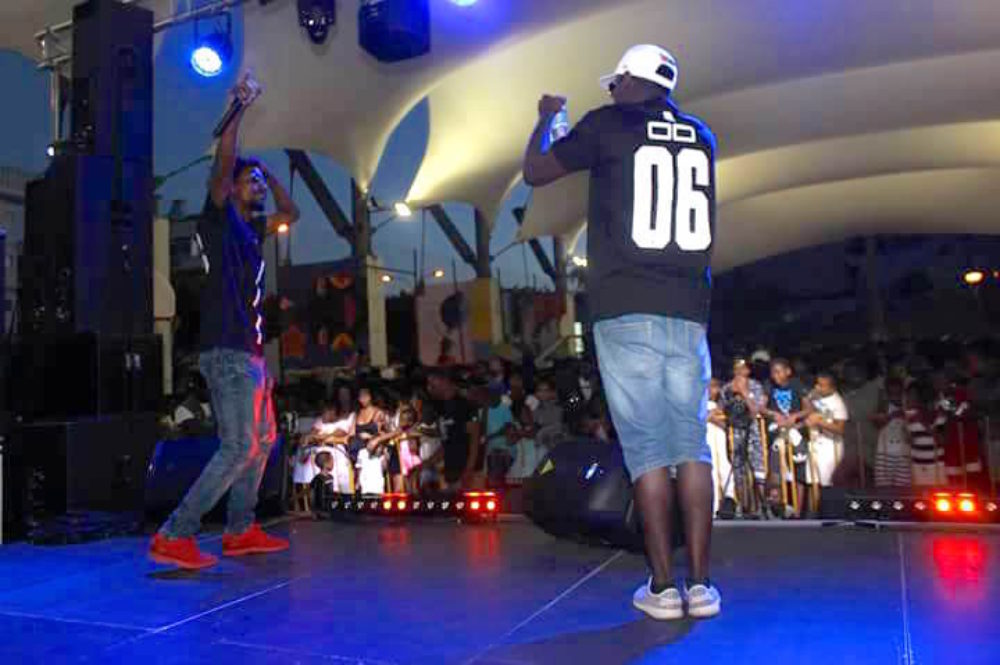 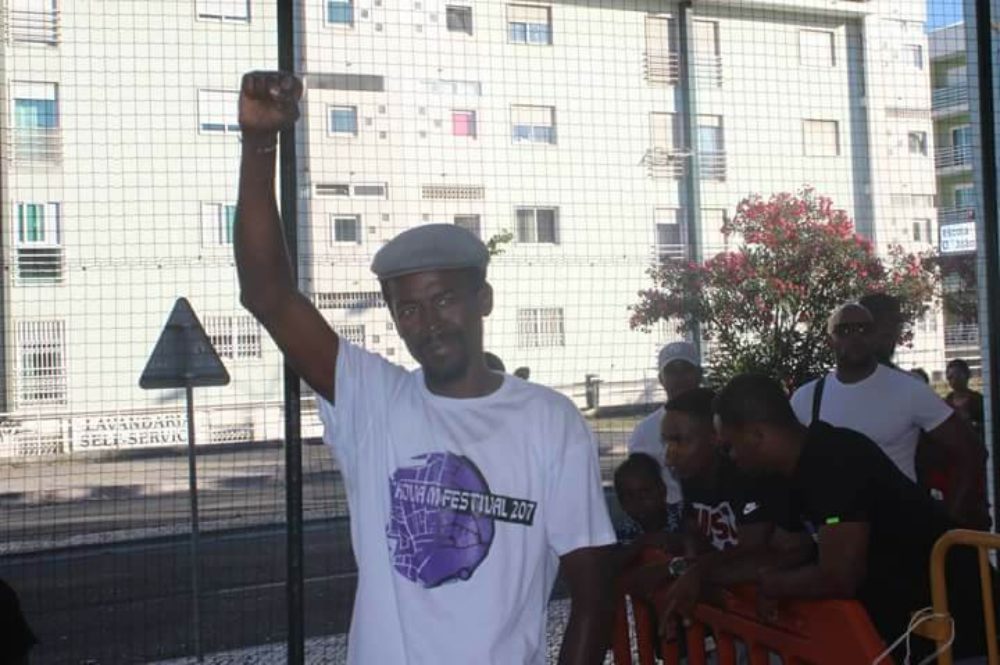 The Portuguese (and international) media only really talks about Kova when the police are involved. It’s unsparingly called a “slum” and painted as dangerous gang territory. Most Portuguese talk about Kova with fear. Crime and poverty are absolutely real problems in Kova, but the outside narrative chooses only to reduce people to being either criminals or victims, and not much else.

In the face of this, Kova’s rappers speak their truths, spelling out the neighborhood’s struggles from their perspectives. Jobs are scarce in the neighborhood. Many people end up in low-paying, unstable work with rough hours and long commutes. Many are undocumented, in part due to a 1981 law that stripped many Portuguese-born African immigrants of Portuguese citizenship. Some fall victim to gang violence, although that has decreased a lot since the ‘90s. Mima lost a brother that way.

In his words, "It's hard to be an African guy in Portugal. To grow up in this kind of place…it's very difficult… Mostly because you can find a lot of racial discrimination these days in Portugal for sure… in the justice [system], in the education, [in] jobs and in healthcare." Where legal discrimination limits opportunities, some people end up working outside the law in order to get by.

And the Portuguese police only make things worse. Mima: "They train on the police schools, in the academy, and then they practice inside of the neighborhood…Sometimes, bad things happen because of that…They shoot and kill black people. I lost...six guys since I was a little boy, that the police shot them…six or more. Some...were minor, 14 years old...The African-American guys, they [go] through the same problems in the United States." Police violence is a big topic for Kova’s rappers. 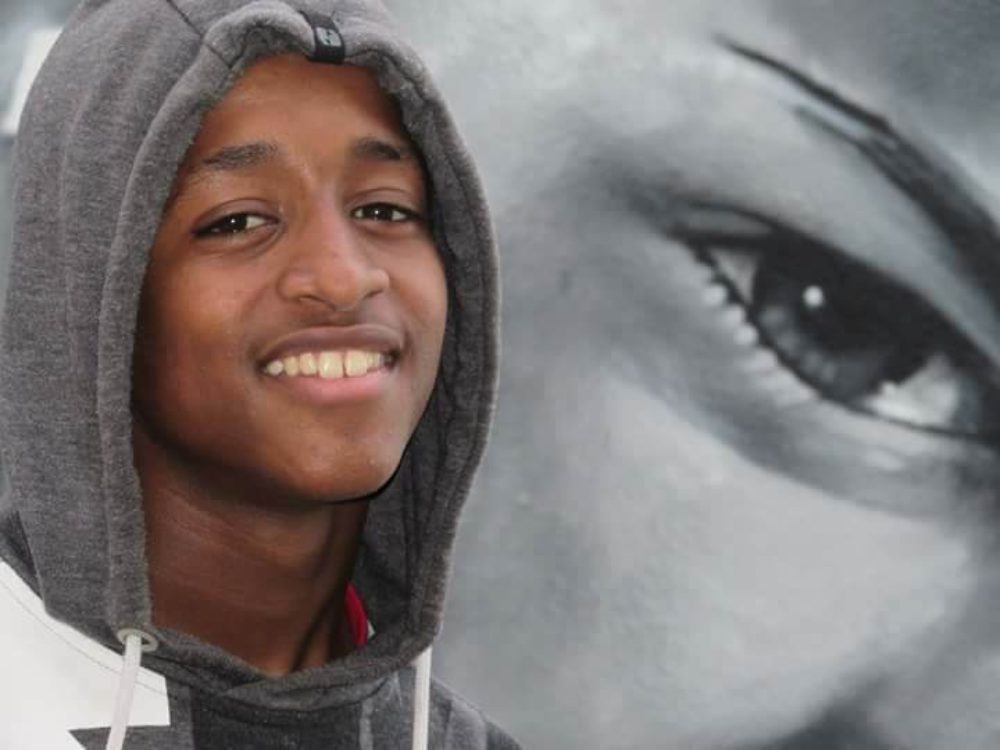 A Kova kid poses next to one of Kova's many murals 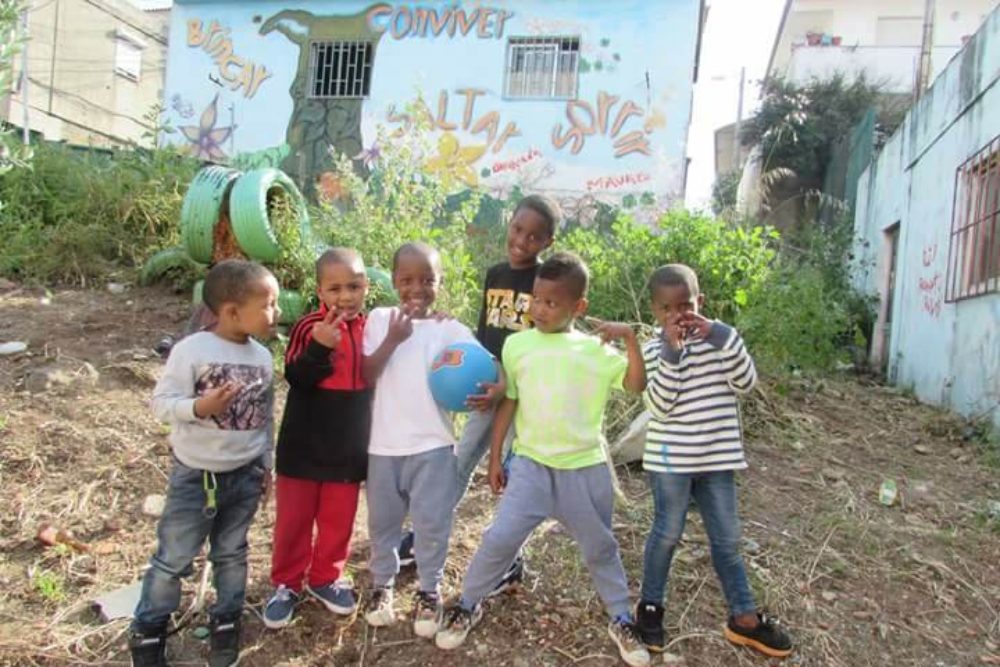 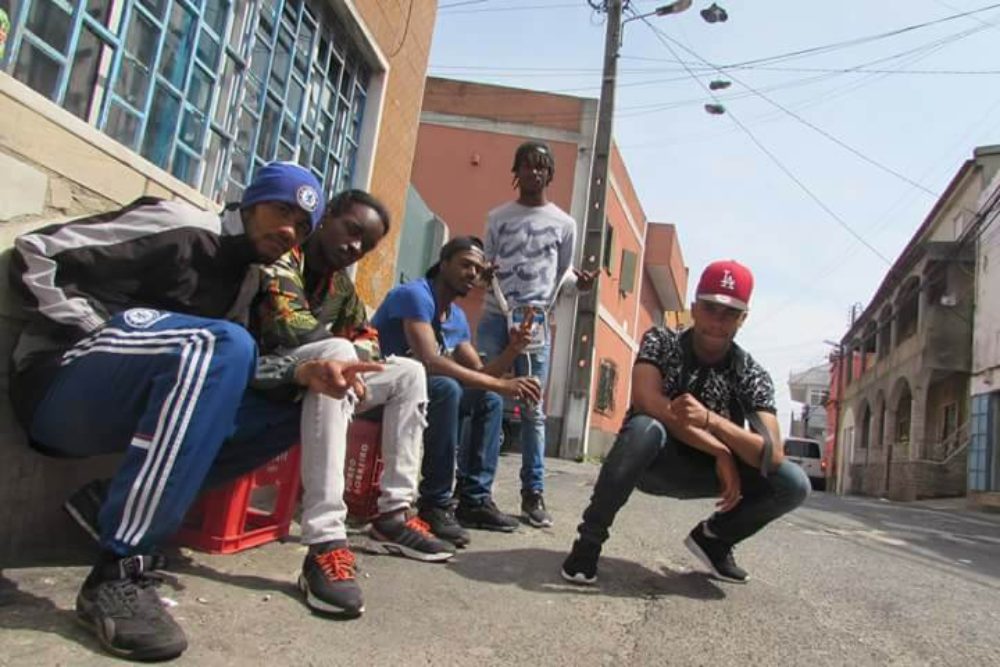 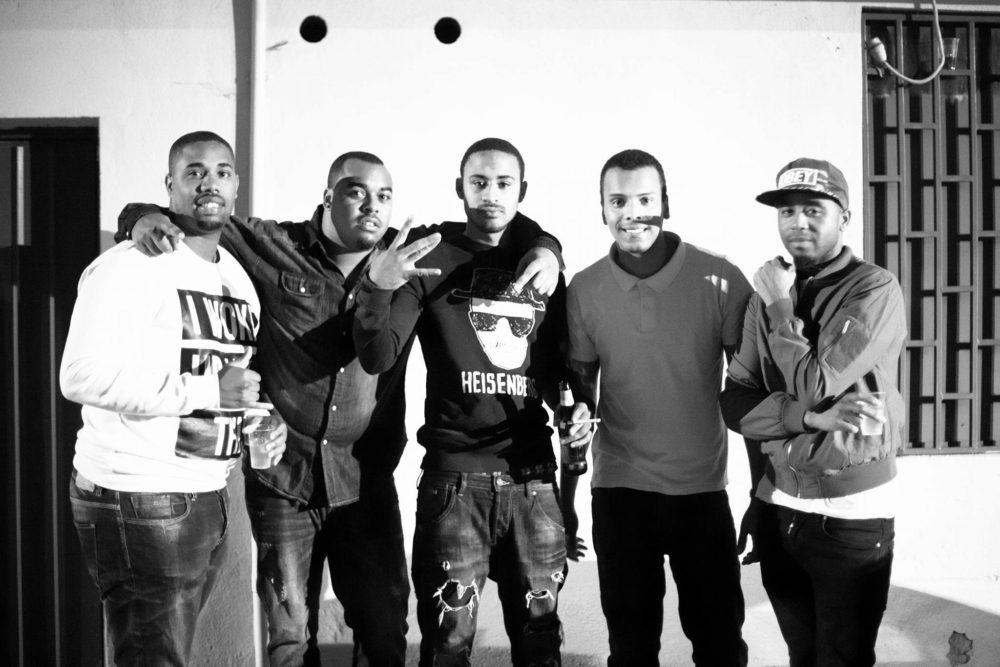 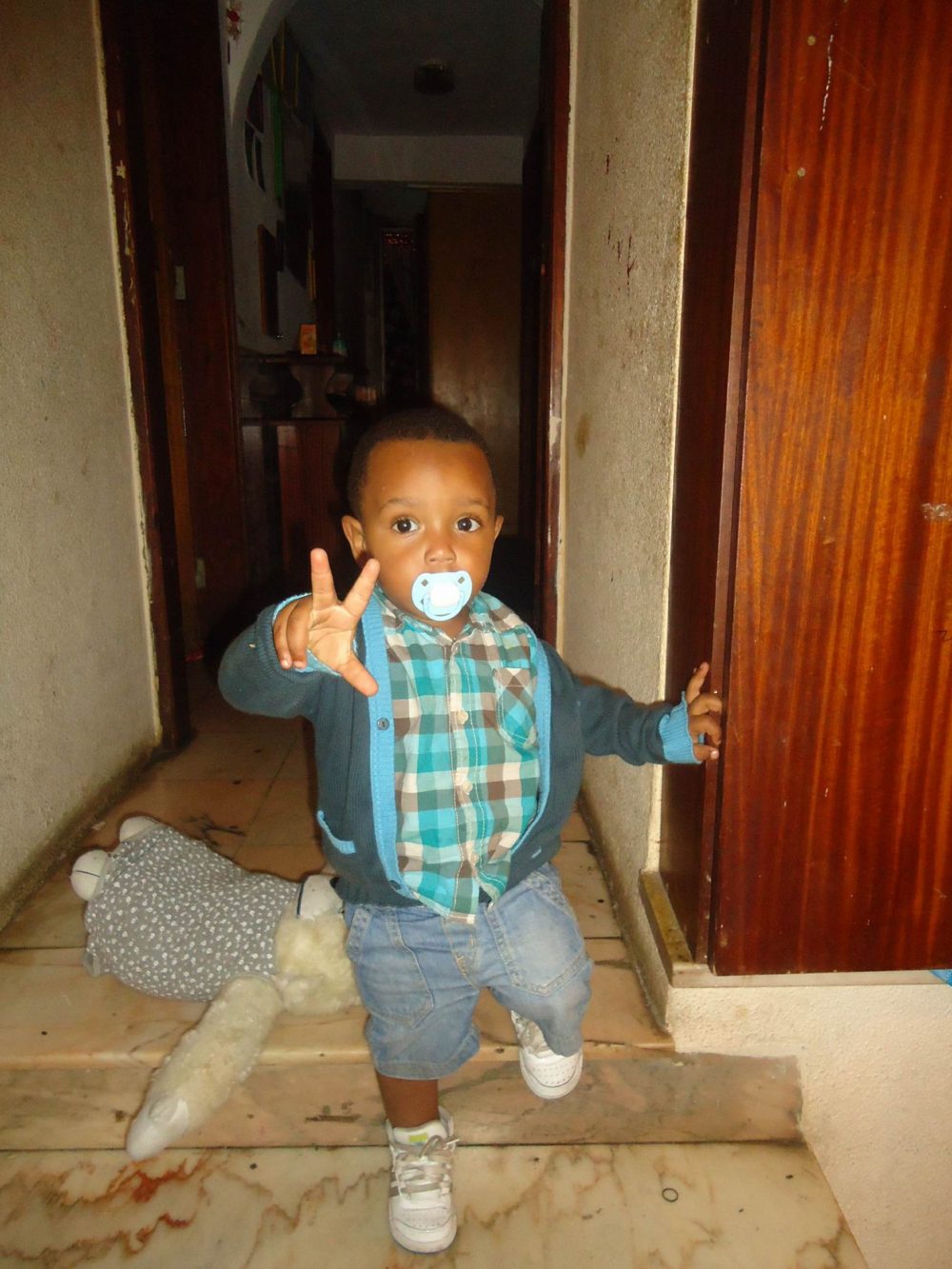 The youngest generation of Kova M

Kova's founders built houses there in the 1970s and '80s, without permits, without basic services. Mima remembers running in dirt streets with wood houses when he was growing up. Things have changed a lot since then. But even today, a lot of residents haven’t been granted legal deeds to their homes, even though they may have lived there for 50 years. This denies people the financial security and power that owning property confers. Mima sees a bitter irony in it: "For me, its easy to understand this, that the entire country was built by the hands from the African people. Even today."

The Portuguese government has used this instability to keep Kova hanging on an edge. Mima says that it has also exploited the negative image of Kova to try removing it all together. Several times in the past, the government has sought to demolish Kova and sell it to developers. It's high on a hill with good views, easy access to a big forest park and good transportation. Those attacks have been put down each time, but other immigrant neighborhoods outside Lisbon have been demolished. Mima is confident, though: "They can’t beat us because we are more strong than them."

To complement the messages of the art made in Kova’s studio, Moinho da Juventude offers practical ways to push back, to build power and advocate for a better standard of living. There’s a daycare, a kindergarten, after-school programs, a community library, free computer labs, training for public school teachers, legal services, sports teams, services for Kova's many undocumented people and much more. It's a multigenerational community that's now run in part by adults, like Mima, who attended its programs as kids. Mima's kids are at Moinho now. 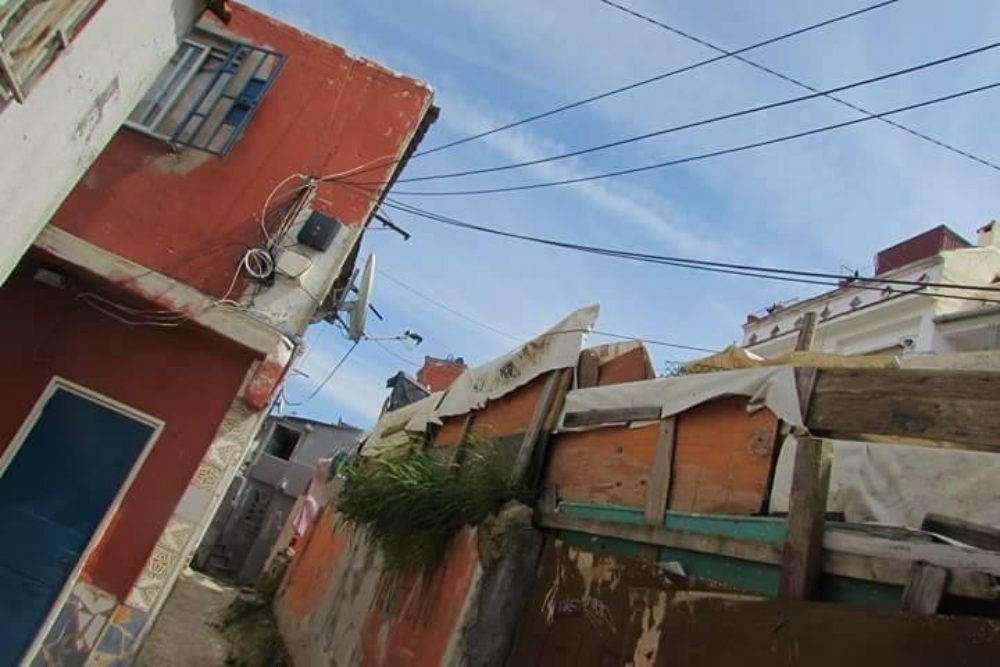 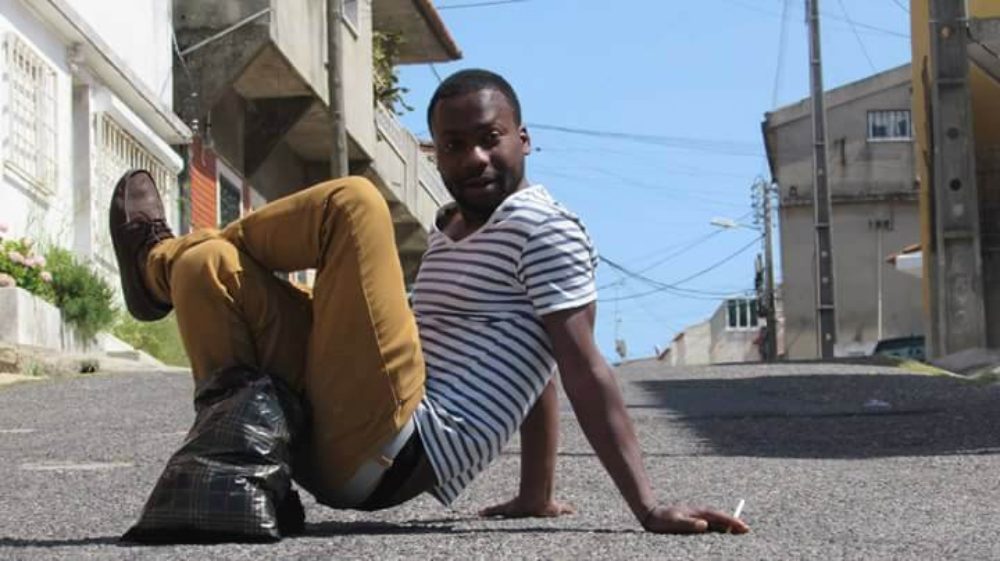 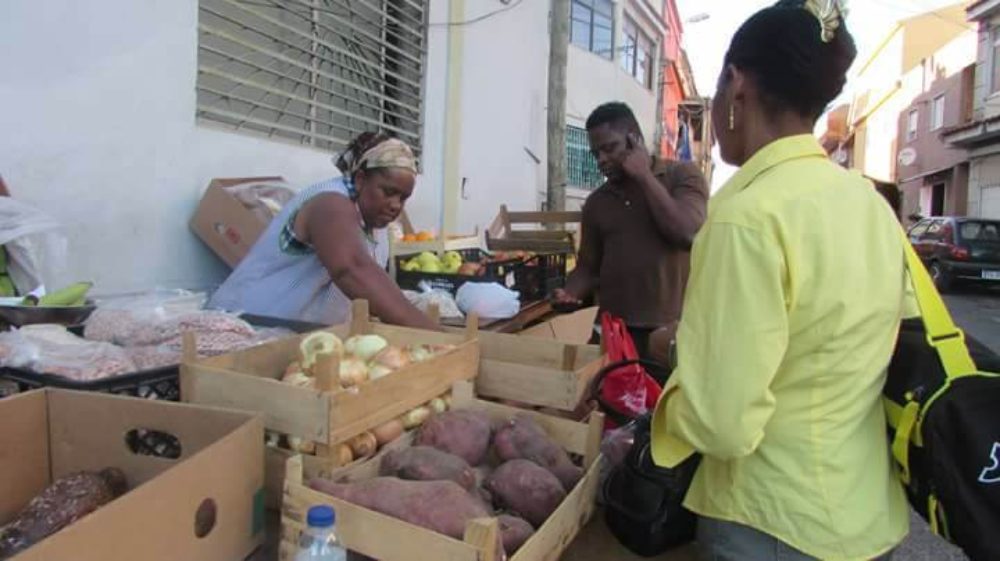 A vegetable stand in Kova M 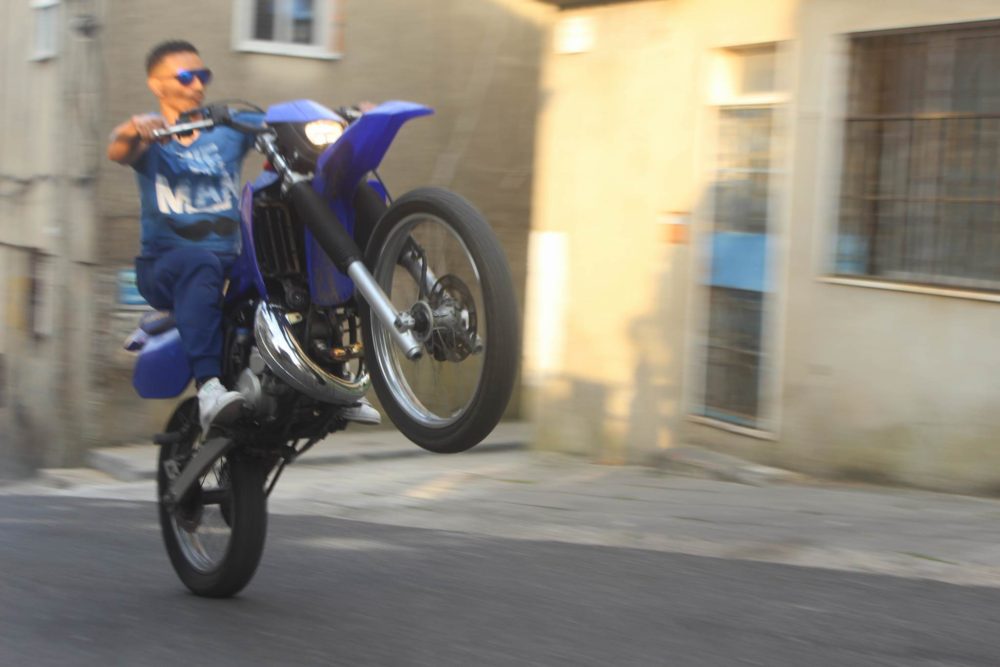 Kova, obviously, is much more than its troubles, and much more than the skewed image the media tends to present. Mima told us, "It’s a peaceful place. You can walk around and meet the people, it’s cool…Here we’re like a big family for sure, all the guys in the neighborhood, the old people also, I grow up with their sons, it’s a big family…Everybody knows everybody, everybody have some fun with everybody, drink some beers with your homeboys, at the end of the day its normal. You can see the lady preparing the barbecue for the people who come from the job…It's made for the people. 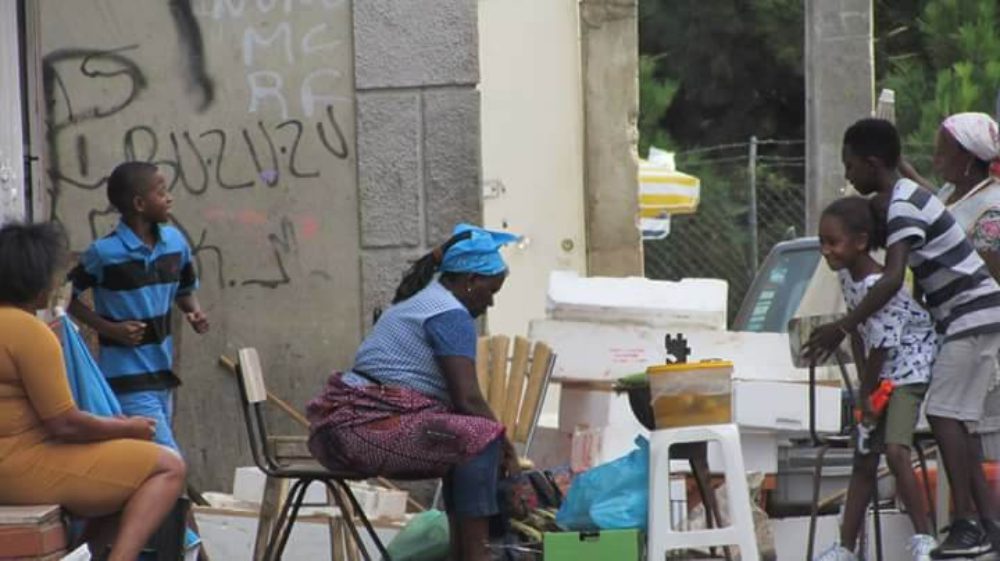 People inside and outside the neighborhood feel drawn to Kova. Mima: "They love this place. Especially weekends. On the weekends it's crazy…Normally the restaurant, the bars, turn into a night disco…and people can have fun." There are cafes with Cape Verdean funana and coladeira for the older set and clubs with Afro-house and rap for the youth. 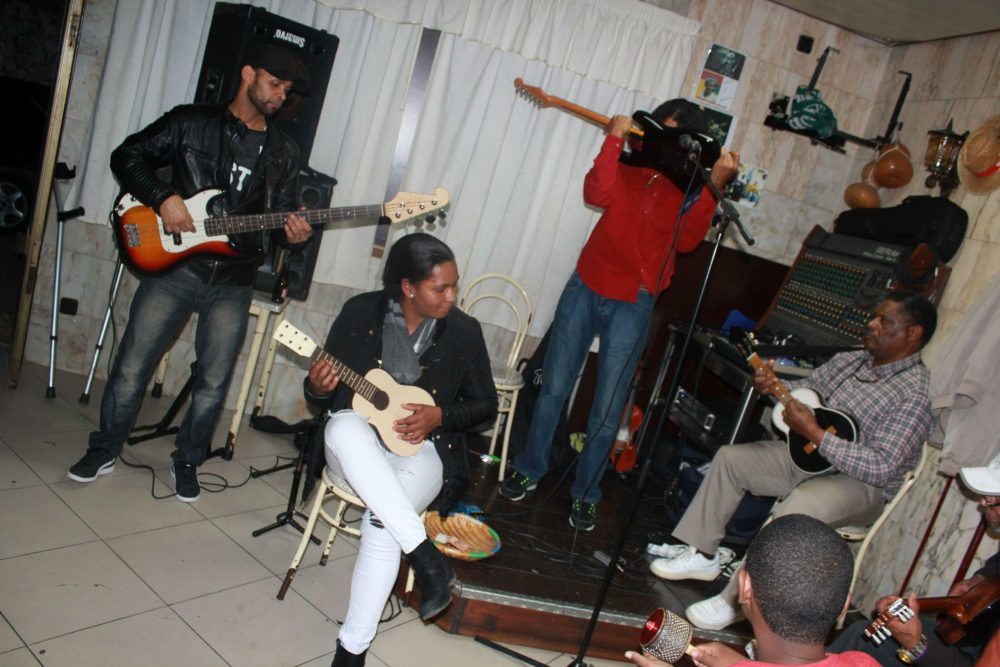 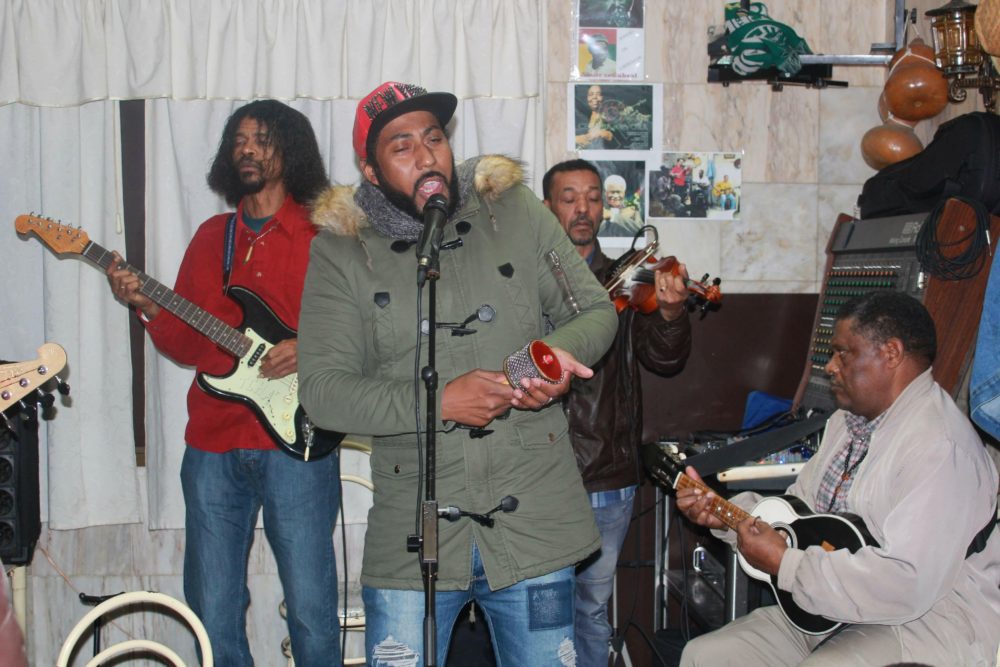 This band is playing at Restaurante Coqueiro, where the music is mostly that of Fogo Island, in Cape Verde 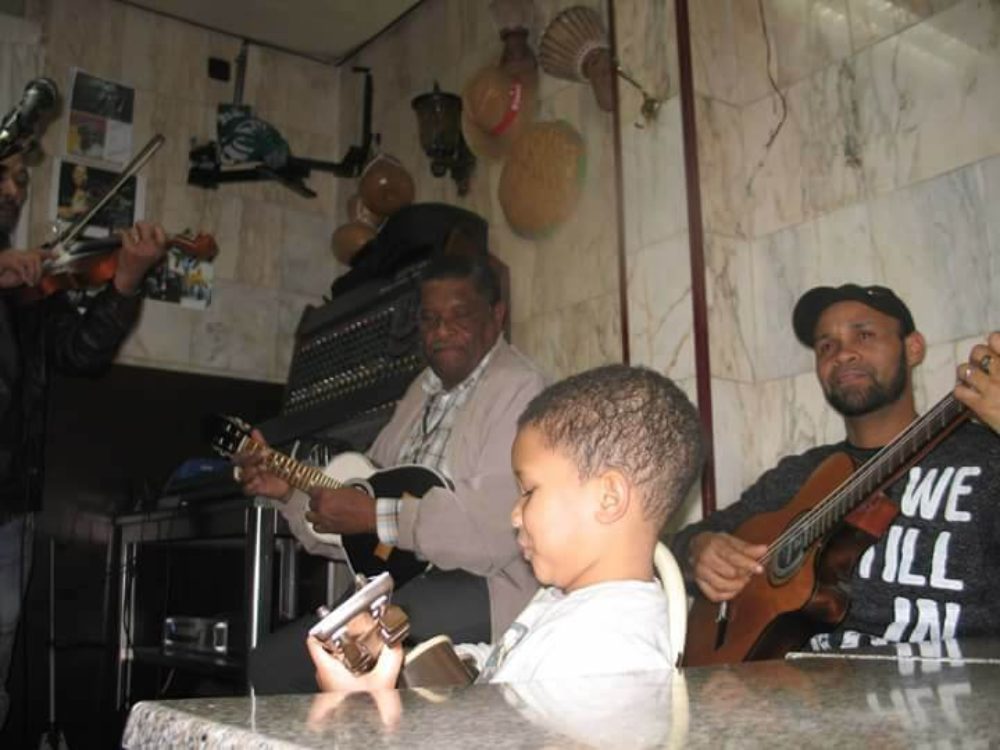 A new cavaquinho star, coming up.

In Kova M, art is power. Big murals pay homage to Dr. Martin Luther King, Jr., Bob Marley and Amilcar Cabral, the leader of the Cape Verde/Guinea-Bissau independence movement. One Kova rapper, LBC Souljah, takes cue from these icons and fights with his words, calling for unity in the battle against racism and inequity and the strength of people living their lives in Kova M. 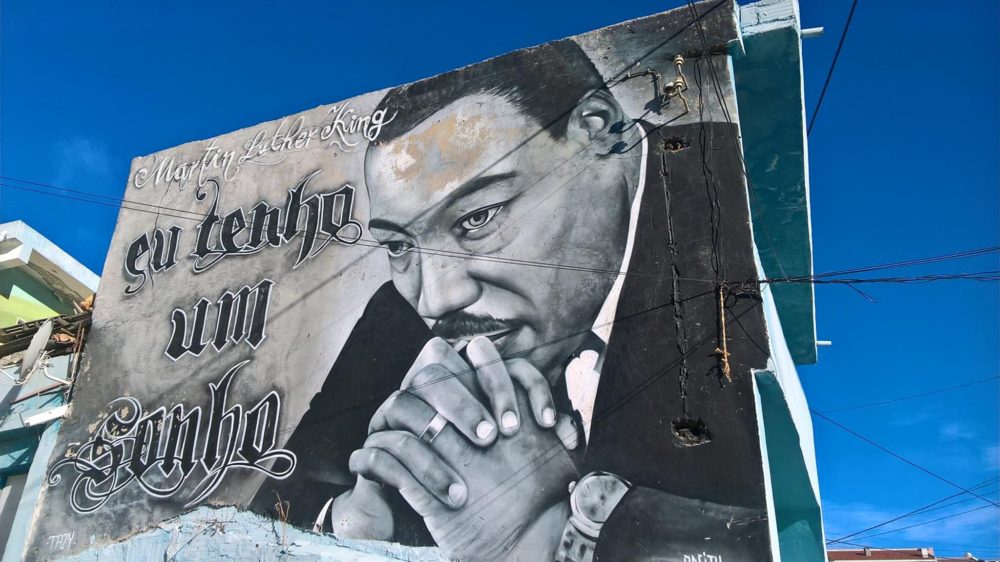