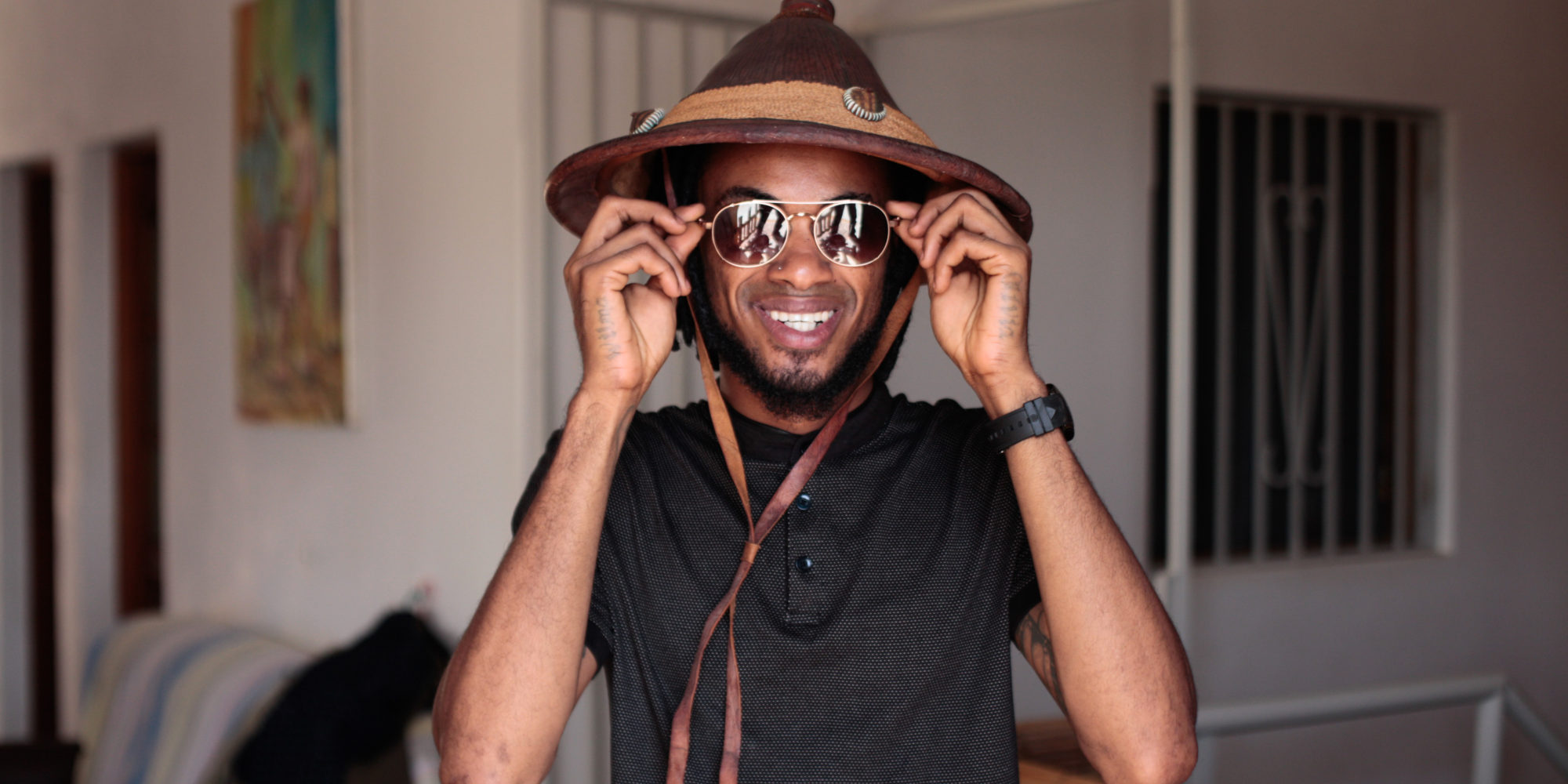 This is probably the most famous song from the most famous Cape Verdean singer. For a small archipelago nation where most of the people you meet make music, you have to be something really special to get heard beyond its shores. You also typically have to fit into one of the several accepted and internationally loved realms of traditional Cape Verdean music: morna and coladeira in particular. The music scene in on the islands is diverse and complicated. But suffice to say that if you play traditional music in Cape Verde, the competition is intense, but if you play nontraditional music like hip-hop or reggae and sing in Kriolu, you might not get much recognition beyond these 10 islands.

This environment does not do much to encourage experimentation and innovation. Yet, there are plenty of young musicians who are testing the limits of local tastes and trying to bring their music international, regardless of its perceived Cape Verdean-ness. There’s a bloom of rappers trying on subject matter that delves into political and social commentary: Helio Batalha, MC Ngunda, Big Z Patronato, Batchart and Rapaz 100 Juiz, among others (some of whom we spoke with in our program “We Are All Creole: The Atlantic Sound of Cape Verde.”) Others are working with different sounds.

I was in Cape Verde recently and got a chance to know a young musician named Wilson Silva. He’s a primarily a bassist by trade and an excellent, in-demand one at that—he’ll show you his enormous stack of festival passes from playing with many of the big names in Cape Verdean music (Elida Almeida and Djodje, for example). The fact that he has been making a living solely off of music for seven years says a lot. Silva’s ample experience in Cape Verde’s active music festival scene has made him skeptical of their value to local musicians. The Atlantic Music Expo is a major event, bringing musicians and industry professionals from around the Atlantic region to Praia to perform and network. But Silva explained that “the same people that are doing the festival…they have the main label around, the only label." He implied that the booking agents who come to the festival are directed towards artists under the label’s wing. For artists outside that network like himself, he’s “not expecting nothing from those kind of festivals…It doesn’t work like that in Cape Verde—I believe it works outside, but not here in Cape Verde.”

While many artists fall into one camp or another, Silva straddles several worlds. His friend and collaborator Hailuu Netsiwanya describes it as “the magic of Wilson. He has a gift that transcends. He’s the exception because people know him. He plays all kinds of cultural music.” This gift keeps him busy at festival time: “That’s why I’m going to sing this Kriol Jazz [Festival]…they chose me because I have many styles, I can perform any stage.” His capabilities go beyond supporting others with his liquid bass playing. At his home studio, he has been producing and recording his own songs “from the click to the fade out” for about a year. In that time, performing as an independent artist, he has put out a nice selection of well-crafted sounds that don’t conform to expectations of what Cape Verdean music is. A multifaceted, multi-instrumentalist man, Silva moves comfortably from his reliable, deep reggae vibe to a spacious, more traditional sound with ornate guitar stylings. Then he’ll hit you with a polished, polyrhythmic production that could feed a dance floor well. Here’s one of his tracks, “Fidju Nho Manel,” a wonderful piece of sunshine.

His path is his own. “I don’t care what you think, if it makes me feel good, I’m going to do it… People here, they don’t do that, they’re scared to be themselves, you know?” If big profits are a musician’s goal, they’ll find the formula of the most popular music around and insert themselves into it—in the case of Cape Verde, that would be kizomba. Silva knows this and probably could make a name in that business, but that is not his priority: “I don’t want to do commercial songs…because every six months I have to record, record, record, trying to make people happy. But I want to make myself happy.”

In that work of making himself happy by making great music, Silva has been teaming up with the Zimbabwe-born, Ireland-raised and Cape Verde-based artist, activist and social worker Hailuu Netsiyanwa. The two collaborate on a musical level—Hailuu, who also goes by Bantufarai—spits some silver-tongued rhymes on several of Silva’s songs, in both English and his mother tongue, Shona. Hailuu, with a grin, explains “We want to do some African boy-band shit.” 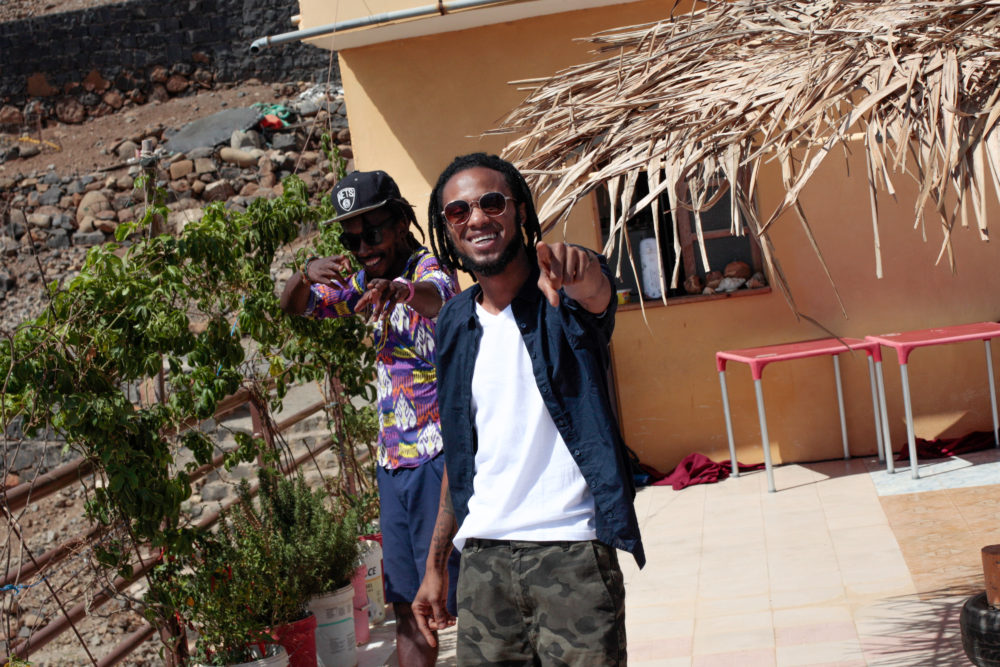 Their work goes way deeper than a boy band, though. Hailuu: “We also work from a start-up kind of sense. I’m here as a cultural entrepreneur from another place and we’re partnering to create a movement.” The movement, called Black Verde, is an evolving network of young artists, capoeiristas, entrepreneurs, social workers, teachers and people in the tourism industry. We’ll take a deeper look into that richly textured project soon, but, in so many words, its goal is social and economic empowerment of Cape Verdean society through conscious tourism, work training, community education and engagement with the nation’s history. 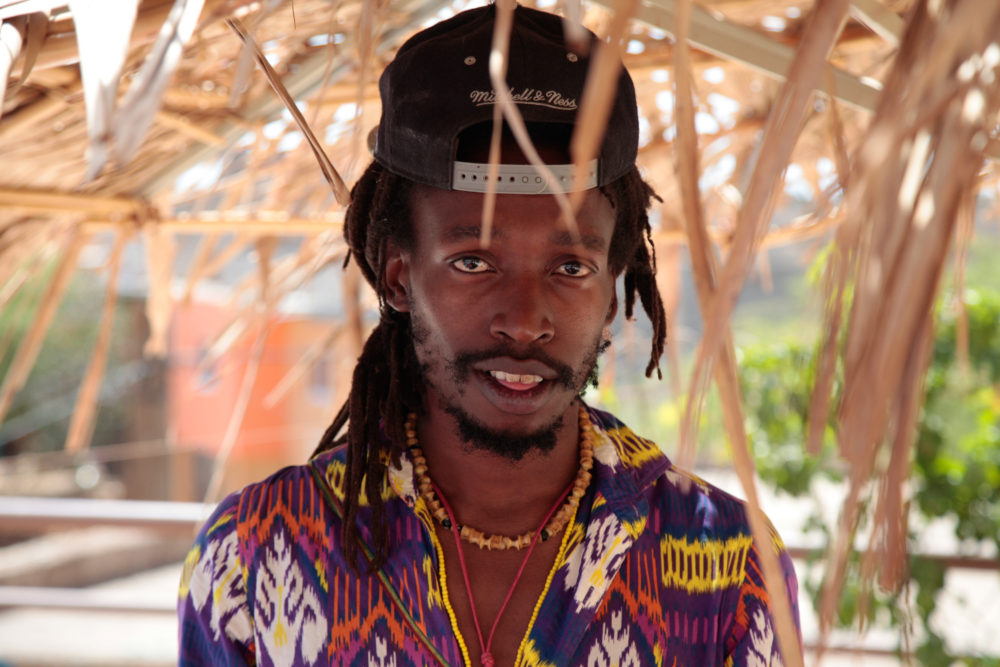 They have a vision for a Cape Verde that loves itself and understands its African roots and current reality. Silva says that Cape Verde should be living like Jamaica, where people, as Hailuu explains, “market their culture proudly, and it’s an African identity. Here [in Cape Verde] it’s a colonial mentality, a Portuguese mentality, and it comes from the elites…Lisbon is like the mecca of Cape Verde.” The traditional sounds of Cape Verde certainly get a lot of love, but peoples’ center of gravity is very much overseas, in Portugal, France, Holland and America. The nation’s neighbors don’t get much attention either. “You’re not going to find, for example, 15 people that know Senegalese music,” Silva laments. “But they know so much about American music.” Hailuu distills the idea: “Cape Verde is racist, man.” Resistance to this Euro-facing outlook is written into Silva’s music, sometimes in the language of Rastafarianism. He seeks to sing songs that build consciousness of local culture and local issues.

This song, “Revolution,” rails against the government’s hostility towards street vendors—the women who sell fruits, snacks, bread and other goods on the sidewalks. Hailuu explains that even as the cost of living rises and a prolonged drought hurts livelihoods, “They’re making strict laws…the people usually trade freely, but now they’re regulating everything...The people had their own kind of economy, which is now being killed…They have this Guarda Municipal, like city police, to control the streets.” If the police catch them, they will confiscate their goods. “They’re poor, they have like five sons in school,” Silva adds, "That’s the way they live, waking up at like 4 [a.m.] to go and buy the products in the market and come here to sell it for cheap.” The profit margin is very small in this work, and when the Guarda Municipal comes and takes their goods, the loss is very large. “And these poor people, what about them?” Silva demands, “What are they going to do about it? This is the politicians' job. They don’t want people to sell products on the street…[because] it’s not pretty for the look of Cape Verde.” The state wants to present a tidy image to tourists but, as Hailuu says, “It’s stupid because this is a key part of the culture here, the Creole culture…it’s an underground war, it’s really sad.” Thus, Silva suggests revolution.

Wilson Silva understands his position as a musician with a public voice and he takes it seriously. He wrote “Revolution” because its subject matter is “a problem that everybody sees [and] thinks about,” but no one acts. “That,” he says, “is why all these political problems are getting worse, because here, people don’t get together to defend their place…But me, I’m a musician…My mouth was made to talk.”

This song calls out corruption and inequality. Silva explains that he writes his songs about things that the average Cape Verdean can relate to. “Fidju de Tudo Koitadu,” he says, “means the poor peoples' sons. If you’re one of them, I don’t need to add the ‘rich’ part onto the song. This is how you live.” The current prime minister, Ulisses Correia e Silva, opposed a plan to build affordable housing, yet demolished a community living near the city in improvised housing, also in an effort to tidy the city’s image.

This perceived governmental disregard for the regular people of Cape Verde is what Silva and Hailuu are fighting against. “That is the essence of this place,” says Hailuu, “they don’t understand. They’re just trying to sell out to big business.” The government is looking abroad for investment, rather than building strength from within. A Cape Verdean trying to start a business will have a harder time getting a license than a Chinese or Portuguese immigrant, Silva says. This accusation, that the government is selling the country abroad, is widespread. With a view of so many unchecked issues in the country, Wilson Silva sees it as his duty to sing about them. Most musicians will sing about “just love and this kind of stuff. For me, love exists, but love is not just a man and a woman; it’s society together, living happily, helping each other, you know?”

This rather sugary song merges these two kinds of loves, in a way. Although the lyrics don’t tell the story, it’s dedicated to a professor at the university in Cape Verde who is the head of a pan-African research department. “They’re also about decolonizing and retelling the story of the African identity,” Hailuu says, “but from within the system. We’re considered a radical element, as artists… She’s a very radical somebody but she has a high position in the system.” He adds, smiling, “We’re outside the system so it happens that we can’t be seen in public together. So we have to speak through art and work…We’re Afro-feminists—that’s the thing about our boy band.”

Here’s another love song made by the pair: “Bantu Princess.” Over a hip, Afrobeats-flavored instrumental, Silva croons in English and Kriolu and Hailuu gives a slick verse in both Shona and English with a nod to the recent Afro-futurist superhero film “Black Panther.”

Silva is just at the beginning of his solo journey, but his years of working with musicians across the board have primed him for a bright future. He has much to offer to the Cape Verdean music scene and society at large. Although he’s working outside the well-trodden paths of traditional Cape Verdean music, perhaps music lovers far beyond the borders of this little nation in the Atlantic Ocean will hear the passion, skill and intention behind his musical creations. We’ll have more soon elaborating on the projects that Silva and Hailuu Netsiyanwa are cooking up. Before we go out, here’s one more track that loops in Cape Verdean tabanka rhythms with reggae and sings pride in Silva’s home: “Kriolriddim.”