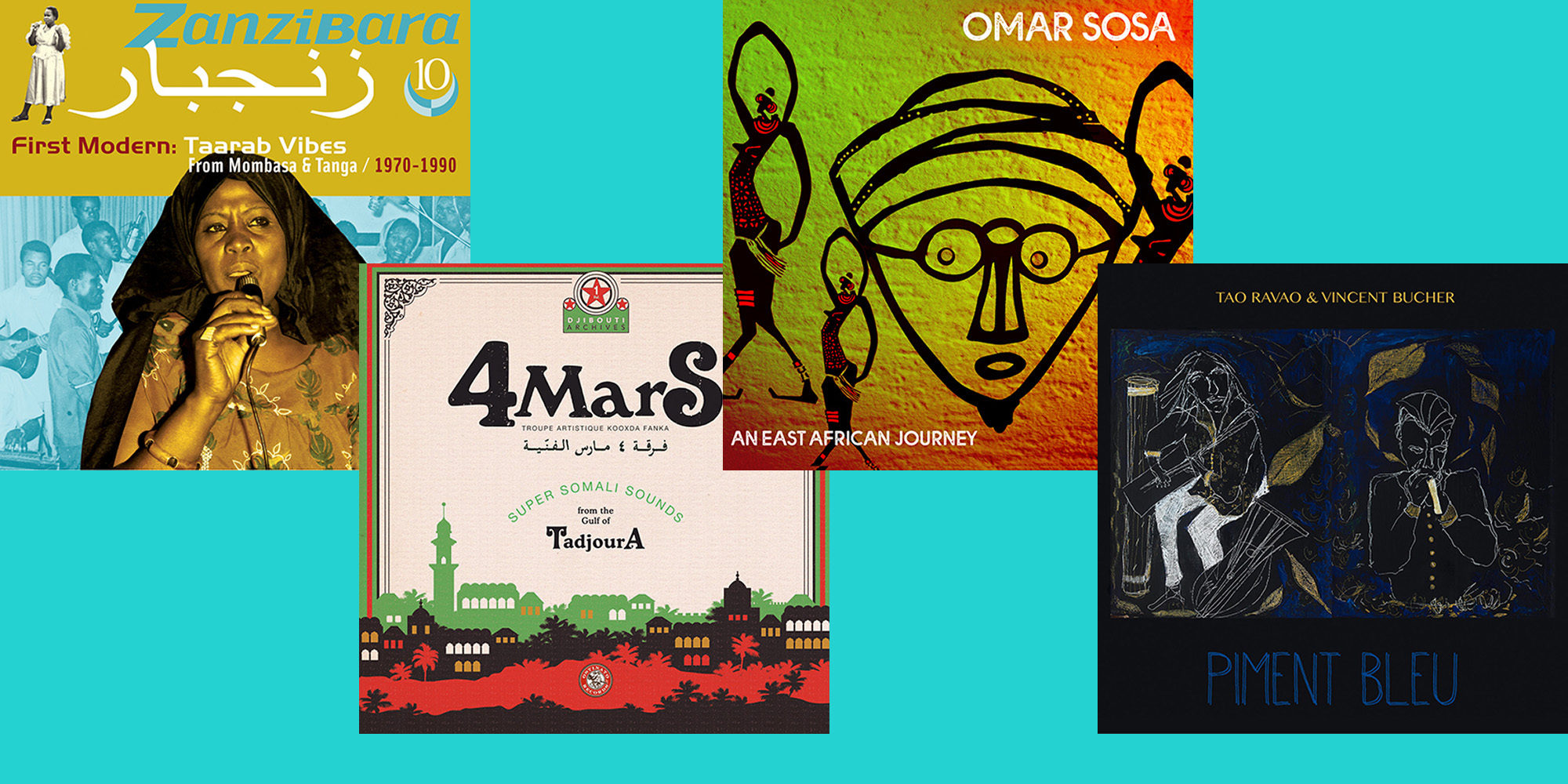 The winter months have brought music from far flung corners of the world that fire the imagination in unusual ways. In this column, I’ve reviewed four East Africa-related albums unlikely to appear on any pop charts—at least not in this century. But each has a unique power to transport the listener away from this winter of contagion and cold. 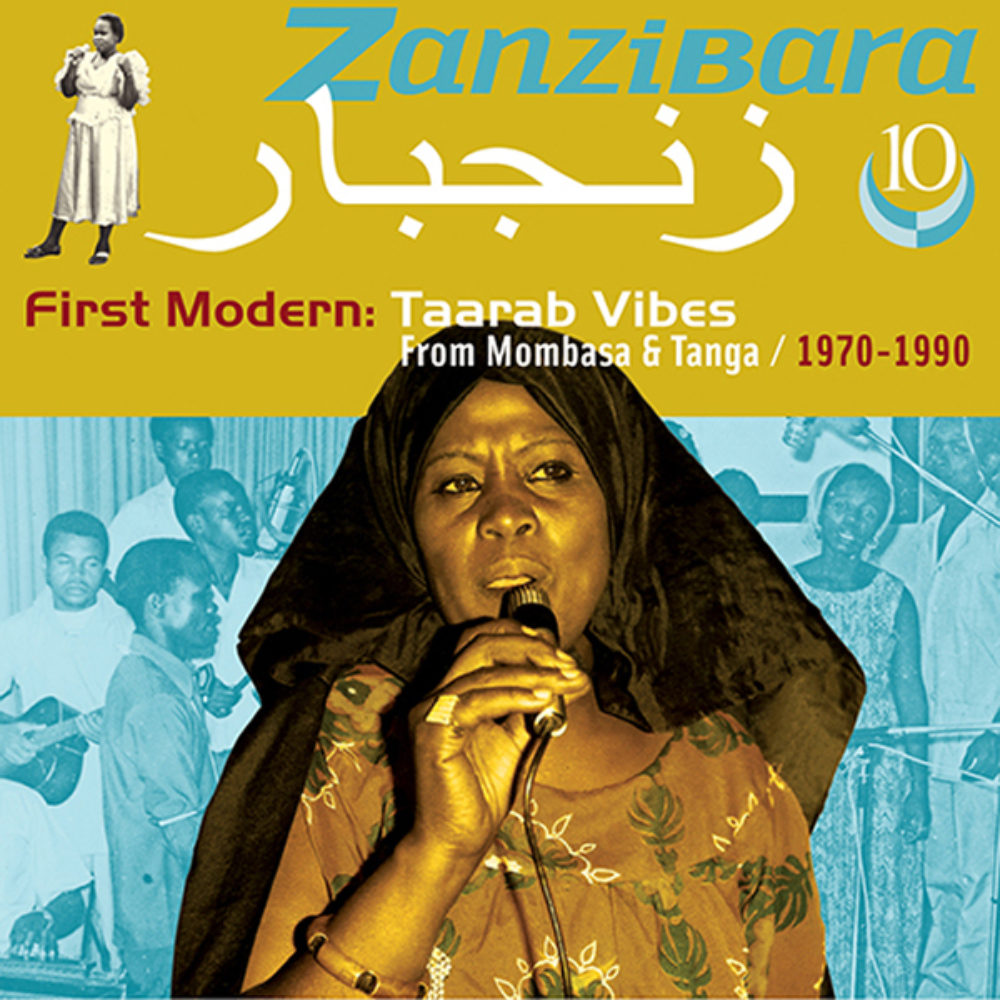 Buda Musique’s ongoing Zanzibara series—curated and produced by Afropop’s go-to man for East African music, Werner Graebner—continues with a deep dive into the uniquely Swahili hybrid music known as taarab. The taarab music of the ‘70s and ‘80s in coastal Kenya and Tanzania is now referred to as “first modern,” because it was the precursor to the more electronic, sound-system-blasted style music that followed, now called “modern taarab.” Based on this set of tracks, one might also call those early decades a kind of golden age for the genre, a time when the venerable burnish of melded traditions and the thrill of experimentation achieved a serendipitous balance.

The music we hear in this set is moving away from the large Egyptian-style orchestras heard on those wonderful GlobeStyle releases Music of Zanzibar, Volumes 1-4, which came out in the late ‘80s and early ‘90s and showcased the expansive sound of Culture Music Club. That group is a glorious holdover from taarab’s earliest days, but by the time of those GlobeStyle releases, popular taarab groups were scaling down, relying more on organ and harmonium, and featuring star solo vocalists like Zuhura Swaleh and Shakila Saidi. But the percussion was still mostly live and the bands still had an organic feel.

Up through the late ‘70s, movement between Kenya and Tanzania was relatively easy and there was a lot of interchange between the coastal cities of Tanga in Tanzania and Mombasa and Lamu in Kenya—important centers for taarab music. Mombasa’s Mzuri record label was a major driver for record production beginning in the 1960s. Ujamaa austerity politics gummed up the works somewhat, especially when the border closed between 1977-83. Mzuri was gradually replaced by Mbwana Radio Service in Mombasa’s Old Town. But creativity and production continued apace, and we hear the results on this collection of 15 tracks.

We kick off with “Macho Yanacheka” by Shakila and Black Star Musical Club. Shakila’s voice floats plaintively over a cycling harmonium vamp. The minor pentatonic melody gives the track a bluesy air, heightened as Shakila soars urgently into her highest register, hanging on blue notes. The title translates “A Smile in the Eyes,” but in the double-edged manner of taarab lyrics, romance also carries an air of threat: “The days will come when things will turn against you…” (For more on the lyric competition between taarab singers, check out Afropop’s Hip Deep program The Story of East African Taarab. The dozens got nothing on these folks!)

To these ears, the female vocalists are the most compelling. Zuhura Swaleh exudes molten heartbreak backed by deep-toned hypnotic percussion and churning organ on “Moyo Usijinzuzue” (My Heart, Don’t Be Deceived). She’s trying to cool the passions of her heart: “Don’t become infatuated. Especially the way people are now. They will take advantage.” She’s even better on “Janatu Naimu,” a gorgeous 3/4 time ballad featuring a clarinet, organ and a low, lustrous vocal that invites comparison with the great Umm Kulthum. Here, a woman is driven to the verge of suicide after being rejected by the man of the song’s title.

The male vocalists in this collection sing more about the straight-up pain of unrequited love. “Kabibi” by Maulidi Musical Party is a particular delight with its tripping 12/8 groove and Maulidi Juma’s world-weary voice at center stage. This ensemble rocked the Mombasa wedding scene for decades and, according to sleeve notes, is still active today.

Another Mombasa legend is the late Zein L’Abdin, whose take on taarab featured his distinctively percussive oud playing. “Nisaidie Mpenzi” (Help me, my love) finds him singing in a low, reedy voice over tumbling hand drums, accordion and that popping oud! L’Abdin was born in Lamu in the north, but moved to Mombassa in the ‘50s. His famed jam sessions in Old Town launched the careers of both Zuhura Swaleh and Maulidi Juma.

By the late ‘80s, the taarab action was moving to Dar es Salaam with its increasingly electronic sound. Meanwhile the cassette market took off in Mombasa where quick production turnarounds allowed singers to stay up to date with weddings, births and other social events. That development certainly enhanced the music’s social function, though may not have yielded the strongest music. In all, taarab music is a deep, rich well and there are many rewarding releases in the Zanzibara set and elsewhere, but this volume is as good an introduction to the genre as one could hope for. 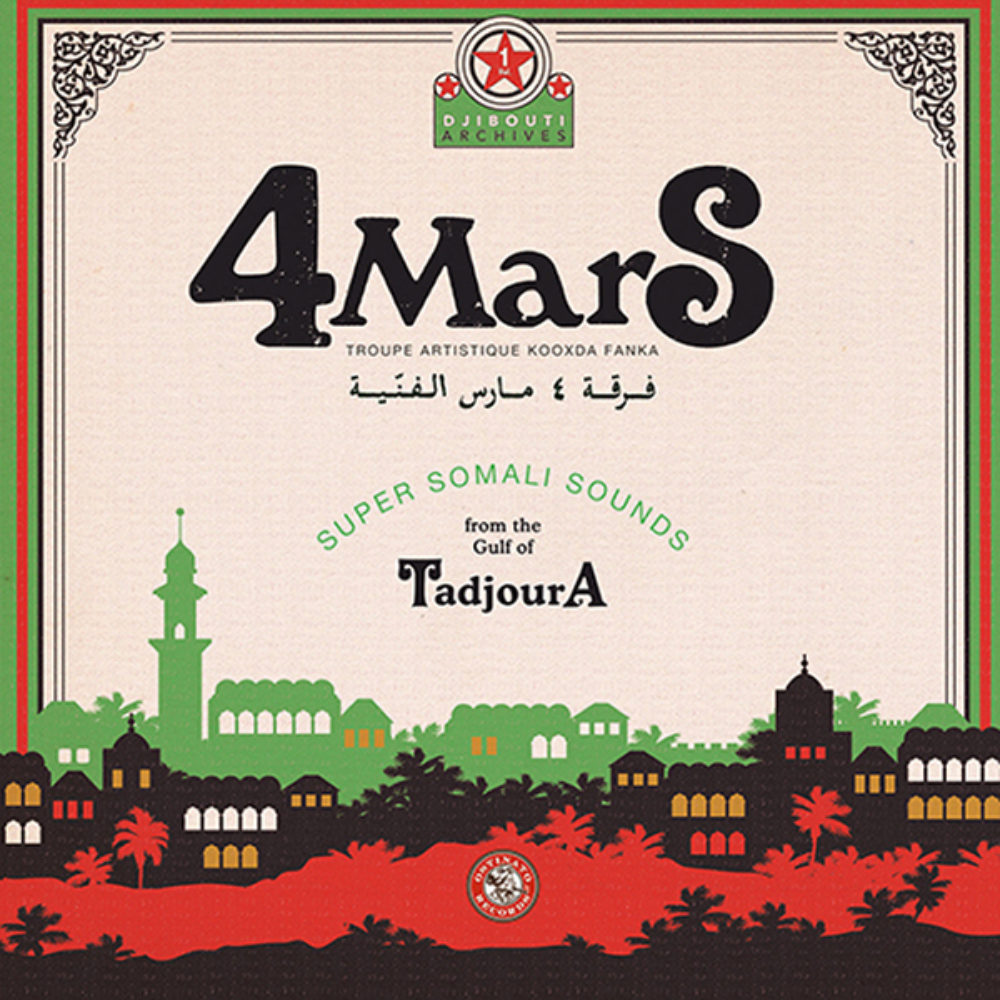 While we’re on East African reissues, here’s something different, recordings from Radio Television Djibouti, mostly from the 1980s and rarely heard outside that rather secretive country. This compilation of tracks by the era’s top band, 4Mars, comes with a story about world commerce, the future of trade and why, after decades of reclusion, Djibouti is starting to open its doors to the outside world.

Lacking in natural resources or industry, this young nation, independent just since 1977, is graced with a strategic location and a richly layered culture reflecting the complex history of that location. Fortunately, Djibouti’s fledgling government grasped the value of culture and effectively nationalized the arts, including funding state musical ensembles, notably 4Mars, named for the founding date of the ruling RPP party—yes, propaganda was part of the plan. More than a band, 4Mars featured over 40 members, including dancers, actors and all manner of musicians.

The ensemble toured the countryside delivering messages about health, politics, and good living. But these sharp performances were mostly made in the National Theater where recording was more appropriate. The blend of Sudanese, Somali, Egyptian, Indian Bollywood and Jamaican reggae influences here is delightful, and a testimony to a the variety of influences in this cultural crossroads. Happily, musicians knew just what to do with such an eclectic heritage.

The reggae element is pronounced, from the easy skank of “Dhulka Hooyo” (Motherland) to the bouncy “Daroor” (The Rain Didn't Come), a groove reminiscent of Bob Marley’s “Jammin’.” “Lama Rabeen Karo” (It Cannot Be Desired) even features guitar chops amid burbling organ and tight brass riffs. Not surprisingly, some locals have claimed that this rhythm is not reggae but rather the Somali dhaanto rhythm. I’ll stay out of that one; as we know, reggae is a sound with a thousand fathers in Africa.

Elsewhere we get the forthright stomp of Sudanese pop, and the soulful funk of Ethiopia’s golden age. 4Mars is a spectacularly polished ensemble. It features some strong solo vocalists, but just as often the tune is carried by large male and female choruses singing in perfect unison. And the brass section is spot on every time.

The 1980s debt crisis and the painful structural adjustments that followed put an end to many things in Africa, including any remaining state sponsorship for bands. Happily, Djibouti kept thorough audio archives, hence this collection. But putting it together was no easy feat: In earlier times, many reels “disappeared” from the archive, and the determined folks at Ostinato Records worked hard to track down and digitize vinyl and cassette versions of missing recordings.

This 2016 video presents the group’s classic sound as a backing track, but by then, the instrumentalists were gone and 4Mars was basically a folkloric song and dance ensemble. 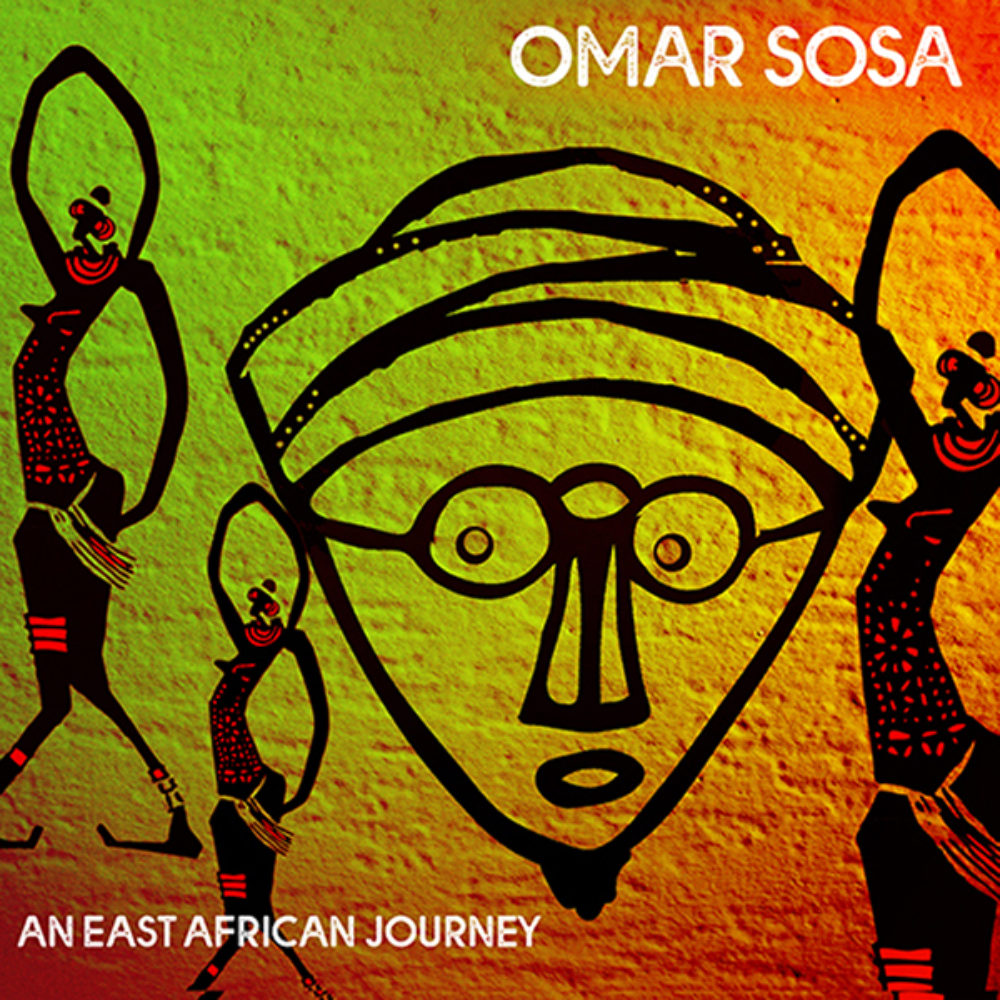 Cuban jazzman Omar Sosa is a singular force in today’s piano jazz. His vast discography is rooted in his Afro-Cuban heritage, but truly embraces the world, including unbound jazz in the spirit of Monk and all sorts of ventures into global, particularly South American and African, music. This album is built around recordings of traditional musicians he made during a tour of East Africa back in 2009.

The original recordings were made in Madagascar, Ethiopia, Sudan, Zambia and Burundi. There are some vocals, but the emphasis is on beautifully textured grooves. Three tracks start with valiha (Malagasy tube zither) performances by Rajery. On “Dadilahy,” a song evoking a traditional spirit healer, Rajery lays out a moody, insistent pulse groove. At first Sosa simply inserts cautious chords into the spaces, but as the piece evolves, he begins to converse with the valiha, arriving at a trancey sonic weave.

Two tracks recorded in Khartoum feature Dafaalla Elhag Ali on boat-shaped harps, or tamburs. “Meinfajria” rolls out a 12/8 groove with Ali’s low-toned, plinking tambur and a high-pitched female chorus. Sosa waits to introduce piano, organically building the tanbur riff into a flowering melody. On “Kwa Nyogokuru Revisted,” Burundian umuduri bow player and vocalist Steven Sogo garnishes a boogieing groove with scratchy, spirited vocals, and Sosa is so deep in the pocket that at first you barely notice him.

This project would no doubt have come off very differently had the musicians recorded together live. But the advantage here is that Sosa and his European collaborators have really taken time to absorb the African textures and rhythms and accompany them in a deeply considered way, more as composers than improvisers. They know when to hold back and when to interject, and the result is richly inviting. It’s also a welcome departure from the many jazz explorations of West African music. 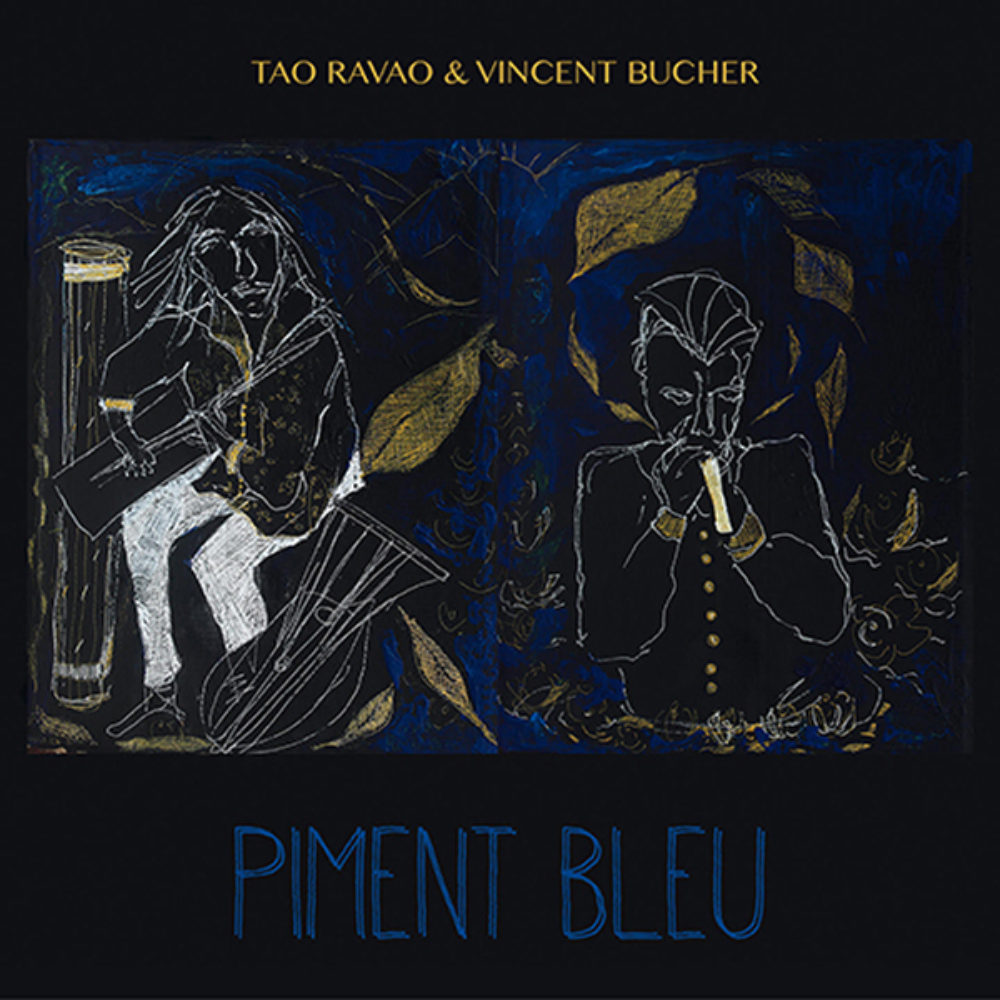 Intimate and spontaneous, even unpolished at times, this release offers a satisfying hang with two unusual musical friends, and an intriguing counterpoint to Sosa’s slow, meticulous approach. Tao Ravao moved from his native Madagascar to France at age 12, and began a diverse career as a multi-instrumental sideman to blues legends and a producer to African musicians in Paris. French-born harmonica player Vincent Bucher also made a deep foray into American blues, and later loaned his improvising talents to African artists in Paris, including Boubacar Traoré and the late Malian Bambara rocker Lobi Traoré.

Ravao and Bucher first met busking in Paris streets and subway stations, and have collaborated in various formations over the years. All that intimacy and eclectic experience shines on this their third duo album. The set makes a seamless marriage of traditional Malagasy sensibility, romping blues vibes and more.

The influences in this collaboration are complex. Bucher’s harp approach is inherently bluesy, though he can produce drones and lyrical melodies as well. Ravao, who composed most of these 11 pieces, owns the rhythmic fleetness of Malagasy string music, but is in no way limited to the island’s typical grooves. Indeed, the set begins with “Agriolykos,” a pensive, melodious ode to an island in the Aegean Sea with a groove all its own.

“Tell Me” is a tribute to Delta blues musicians. The soulful romp “Madiba” and folksy “Sankara” are both instrumental tributes to African presidents. “Ranovelo” finds Ravao switching from guitar to marovany and hewing to Malagasy triplet rhythm; but the vocal refrain is “Rock my soul.” The album’s title track builds around Ravao’s ukulele-like kabosystrumming dominant seventh chords in the manner of old South African jazz, while the sing-along “Dream of You” feels more like classic calypso. On “Semelles de Vent” Bucher channels accordion on his harp arriving at something very close to zydeco. All by way of saying, there’s no predicting which way this duo will head next, and that’s certainly part of the fun.

Neither artist is a first-rate singer, but both have terrific chops on their instruments. Bucher is particularly strong improvising with passion on “Adama,” a lament for a late musician friend, Adama Traoré. On guitar, valiha and marovany, Ravao lays down solid grooves every time, and delivers a raspy, affecting vocal on “Akoriabe,” a lament for the dead—fitting as the session was tracked in France in July 2020, at the height of the summer Covid wave.