Everything you ever wanted to know about Haitian music but were afraid to ask! This "Best of The Beat" reprint from 1987 was the result of an exploration of the roots of Haiti’s popular music, undertaken by my research partner Gerard Tacite Lamothe and me in Brooklyn, 1986, where we interviewed a host of artists and record producers, and enjoyed live compas in the local dancehalls.

In the first installment of this feature, we encounter the music that began in the ‘40s with Rene Saint-Aude’s Jazz des Jeunes, through to the 1960s when Nemours Jean-Baptiste and Weber Sicot ruled the music scene. The lively dance music played by this foundational generation drew from American jazz, Dominican merengue, Cuban music, and of course the vodun repertoire and the folk music of the country called twoubadou (troubadour). 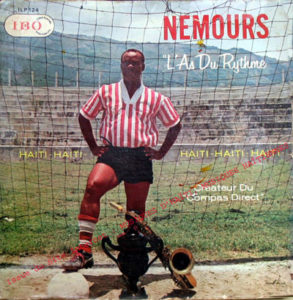 Bandleaders Nemours and Sicot, both saxophonists, had a friendly rivalry that recalls that of the Congo’s Franco and Tabu Ley Rochereau, each with legions of dedicated followers as soccer teams have. You had to be in one camp or another. Each group sang songs aimed at the other, launching humorous insults and boasts that spurred each other on. Eventually the two orchestras actually played a soccer match in front of 35,000 fanatics.

The storyline continues to parallel the Congolese trajectory, as a new style of music that spoke to the next generation superseded the big bands. In Congo, it was the emergence of Zaiko Langa Langa in the ‘70s that toppled the rumba bands; in Haiti, the style, influenced by the Beatles, was called mini-jazz. Both new waves dropped the horn section in favor of guitars. The now-veteran group Tabou Combo was one of those teenage bands; we’ll read about that in the second part of this feature story.