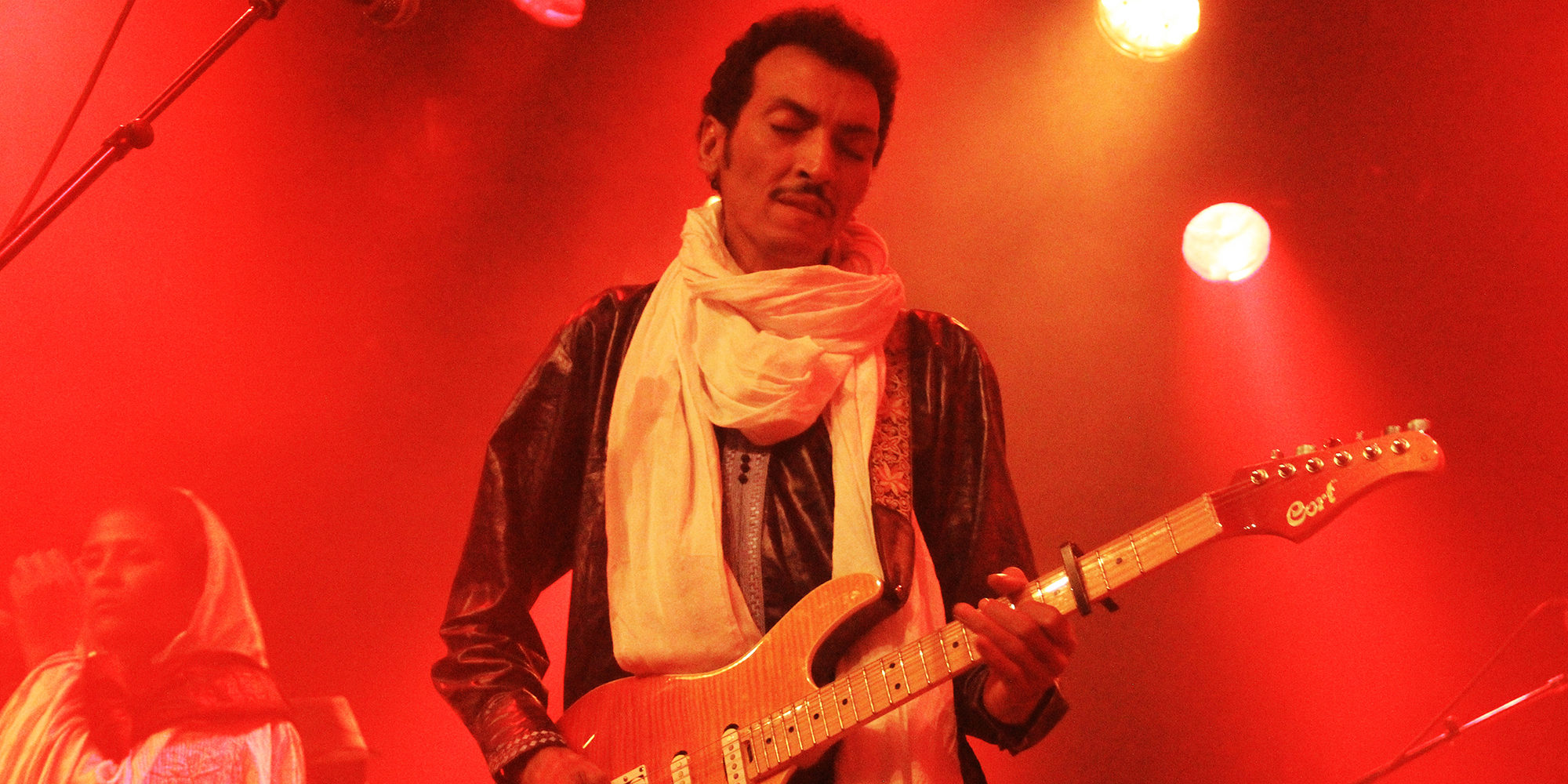 Niger’s Grammy-nominated singer/songwriter and ace guitarist Bombino releases his first-ever live album as a solo artist, Live in Amsterdam ( Partisan Records) on Nov. 27. Longtime fans may remember his first international releases as part of a group on the Sublime Frequencies label. Needless to say, Bombino has grown enormously as an artist since then, having released albums produced by Dave Longstreth (Dirty Projectors) and Dan Auerbach (The Black Keys). On this album, we get Bombino the performer, animated by a big crowd—remember those?—and the aura of excitement unique to a big stage at night.

Recorded and filmed in November 2019, Live in Amsterdam is inherently nostalgic, not only because such concerts are for now a thing of the past, but also because it was among the last performances with Bombino’s rhythm guitarist/vocalistl Illias Mohamed Alhassane, who died this past September.

All that aside, this is an album that fans of desert rock won’t want to miss. It’s as energy-charged as any live album you can think of—truly a magnificent performance, flawlessly documented. Today, we premier a video of the band performing the song “Timtar.” Afropop’s Banning Eyre spoke with Bombino about the project and his life in the COVID era. Their conversation follows.

Banning Eyre: Bombino. Nice to speak with you again. I've really been enjoying your live album. It's very powerful.

Especially these days when we can't go to real live concerts.

Where are you now?

I am in Niamey. It's O.K. here. We are confined, starting get to get back to activities little by little. But we're O.K.

If it wasn't for the pandemic, you would probably be out touring now, right?

Yes. If it wasn't for COVID, normally, we would be in Canada and the United States this fall. 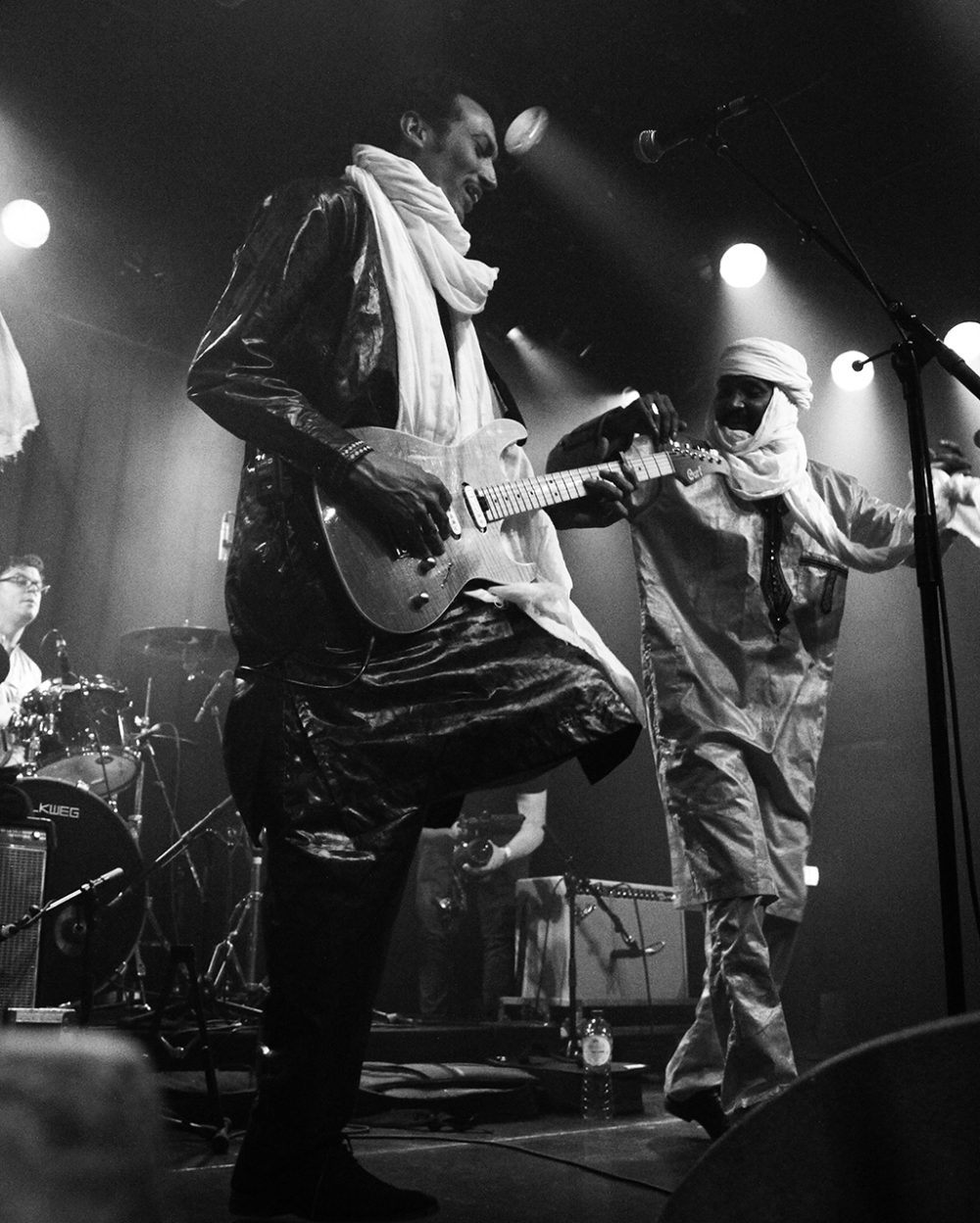 So how have you spent this strange year?

Well, really, in my mind I've accepted that this is going to be a white year, as we say. And I know this is a very difficult year for the whole world.

I've watched a couple of the videos that go with this new album and it seems like this was a very special concert in Amsterdam. Is that right?

Yes. It was a great live concert. We thought it was a good time to do it as a live album, with the public. We planned it well with all the right equipment, and we invited some friends, cousins, to bring an African feeling to the stage.

I understand there is one sad note. This is one of the last concerts with your guitar accompanist Illias Mohamed Alhassane.

Yes, that is very sad. This was a great loss for us. For me especially, it was very difficult. Psychologically, to go out with someone and to return without them. It was malaria, a huge problem in Africa, apart from COVID. In fact here, malaria is worse than COVID. With COVID you can protect yourself. This is more serious, very dangerous.

Had Illias been sick for a while, or was this sudden?

He had been sick for quite a while with malaria. He was told to rest for six months, to take a vacation. Then he went with some friends to Agadez, and he had been sick for about two weeks. After that he traveled with us, but when we arrived home, the malaria was worse. And he did not recover.

So sad. Had he been in the group a long time?

It's very hard to lose a musician you've worked with closely.

Let's talk about the songs on this album. Most of them are wonderful new versions of songs from your earlier albums. But there are a couple I didn't recognize, like “Midiwane.”

This song comes out of reactions to all the traveling we've done. Me and my friends have traveled almost the entire world. We think about these things all the time, the people we met, the places we've seen during tours. But during the tour we also miss our friends and our families. The song is about that. 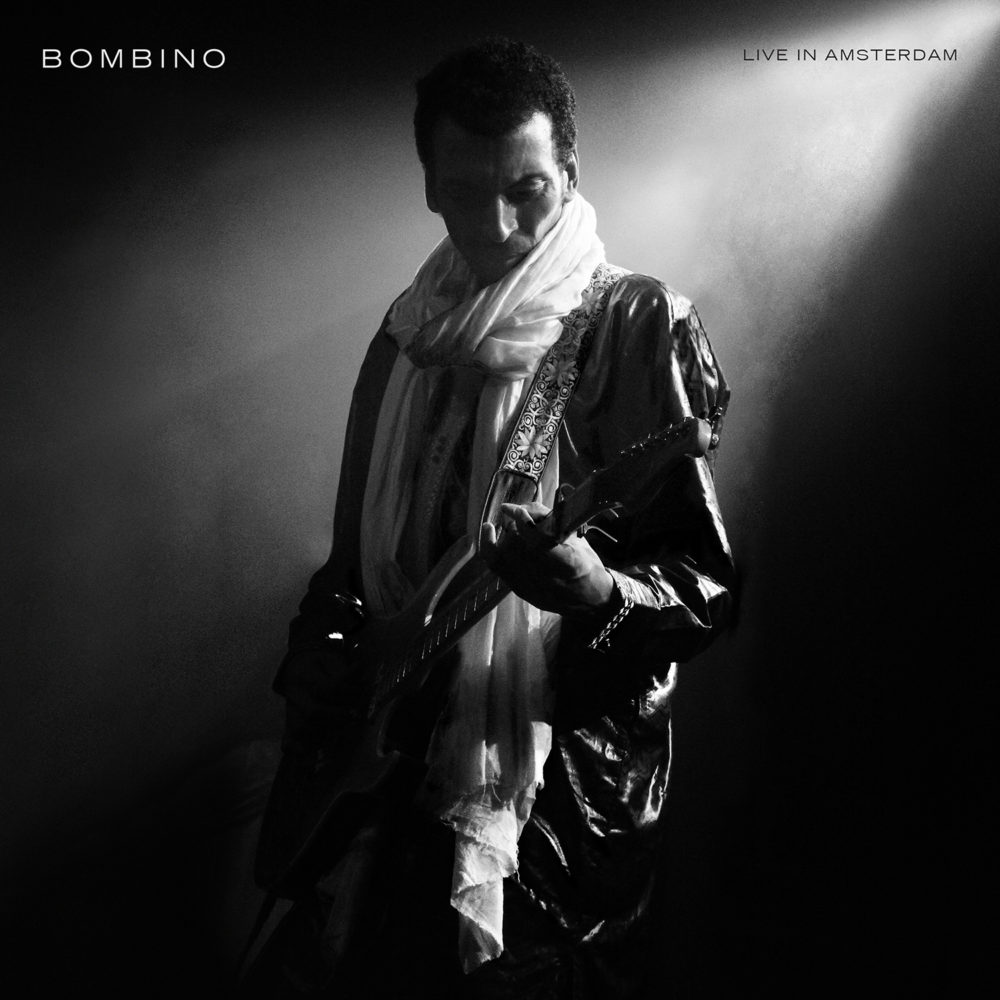 And there's one other I don't recognize, “Chatahat.”

“Chatahat” is the stars. In the desert at night, when there's no moon, we look at the stars. And the stars tell us what's north, east, west and south. It's like a compass. You look at the stars and they tell you how to go north or south or southwest. It's the stars that prevent you from getting lost in the desert. It's not easy to travel in the desert because there's not water everywhere. That's the big problem of the desert: water. You can go for days without finding it. That's why it's best to travel at night. It's very, very hot during the day, and you need to find shade to rest in. That's why the Tuareg mostly travel at night using the stars, the chatahat.

Beautiful. Your recent albums were all made in nice studios with interesting producers and lots of technology around you. It's a very different feeling to make a live album. I think we hear a side of Bombino that we don't get in the studio. Tell me why you decided to do that.

Yes, above all, for me psychologically, as a person who came from the desert, we didn't have a lot of things available. So to go into a real studio in Europe or the United States, you have the feeling of being closed in. The studio and the stage are not the same thing. On stage, you have three things. You have the energy of the crowd, you have the energy of the group, and you have your own energy. For me these are three things you can use to create and express yourself. You can bring something more to improve the music. When you can make the people happy, that's what I really like. That feeling is so important.

I feel that listening to this. Now, you and I have spoken before about the messages in your songs. And of course most of your albums have nice translations. But for people in the audience at a show, they don't have any of that. They just have the sound. In Amsterdam, they don't understand the lyrics. Do you think about that when you're performing?

And you also have quite a lot to say with your guitar, don't you?

[Laughs] Absolutely. You speak with the guitar and the heart.

I play guitar too, and I've always admired your style. It's very expressive. I noticed that the last song on this album is “Chet Boughassa.” That's a song by Tinariwen, right?

Yes. It’s Tinariwen. We have our own version.

I think that's interesting, because in this music that you play—ishumar, assuf, or some call it desert rock—you don't find a lot of groups playing each other’s songs. In other styles you find that more. But I think it's great when the song itself become something that musicians can share.

Yes. That's a very old song by Tinariwen from the 1990s. Here and up in Agadez, that's one of their most beloved songs. All the Tuareg of Niger know this song. It always makes people dance. People like to hear that song in the night. We often play it in live shows. It's important for us because the Tuareg really love it.

It's become like a classic, a standard. I can imagine that in 20 years the young groups of that time will be playing Bombino songs. 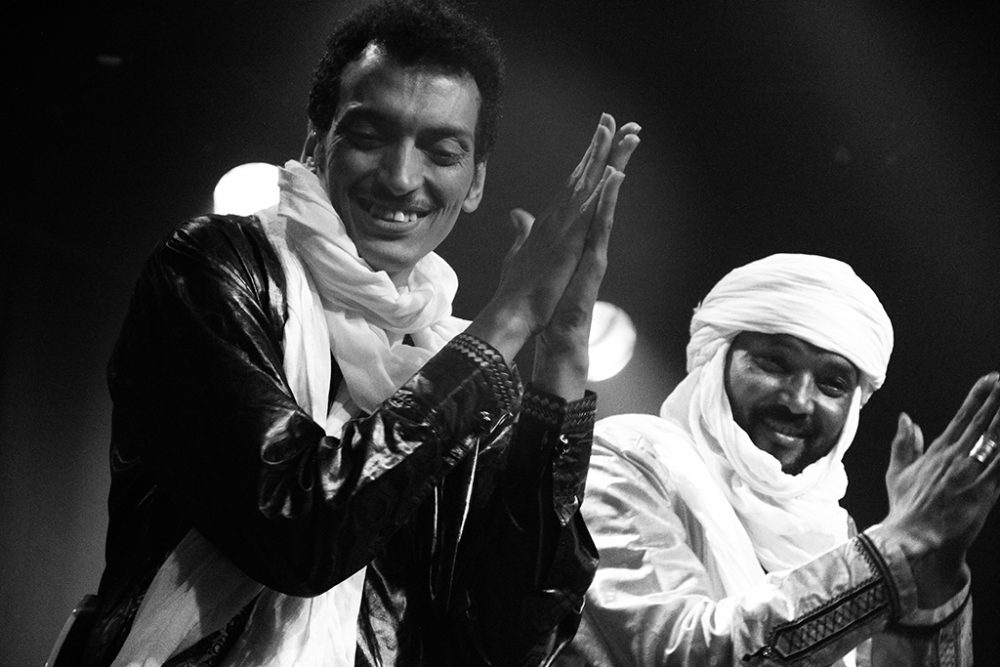 The style of music you play is still very young, isn’t it? We have to remember that. It's not like it's been around for years and years and years. Only since the 1980s, right?

Yes. Yes. It's a young style. And for young people. The young people of Agadez, of Niger, they love this style. They favor the guitar. And when they hear this group, Bombino, it encourages them.

Are there a lot of young guitarists there, learning, practicing?

Yes. Yes. A lot of young people are playing guitar. You see young people at ceremonies and things like that. They come and stand behind the instruments and watch the group playing. They get the sound in their ears, and then in the morning they are playing on their acoustic guitars, practicing to play what they heard the night before.

That's good to hear. That's how music lives. There are a lot of places these days where the guitar has fallen out of fashion. People are playing keyboards and computers. So it's nice to see a style that's living around the guitar.

When you see young people in Agadez, even in the desert, they often have guitars. Seems like everyone has a guitar.

When you were young it wasn't like that, was it?

No, no. When I was young. It was hard to see a guitar anywhere. Very difficult. Now there are a lot of guitars because groups have traveled in Europe and brought them back.

Well, I hope a lot of young people are practicing their guitar licks during this time of COVID. That's one thing it's good for: practicing.

Well, congratulations on this album. It's a beautiful addition to your great collection of recordings.

Thank you very much.

And I send you greetings from all of us at Afropop Worldwide.

And greetings from Groupe Bombino to everyone there. We hope will see you soon. 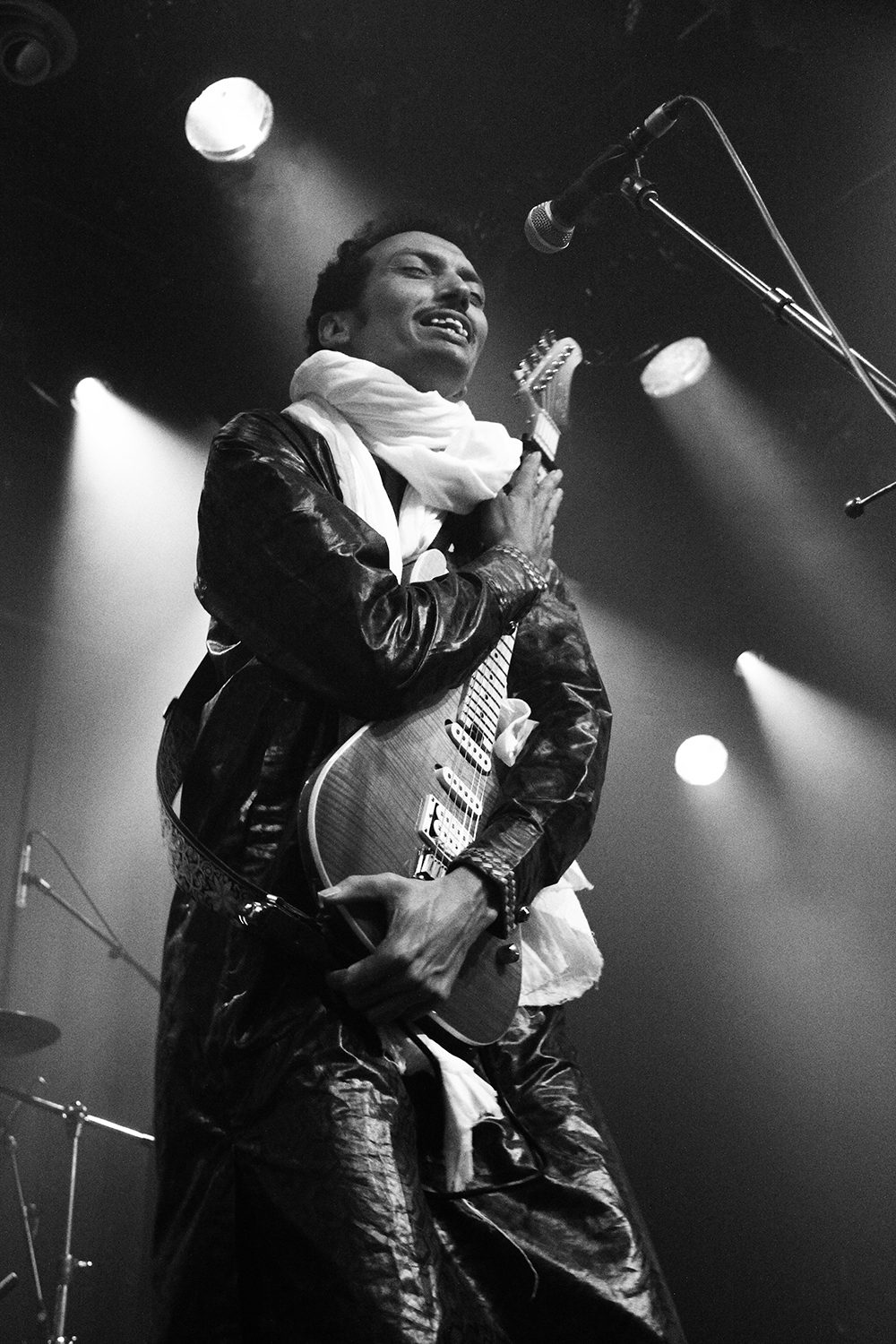