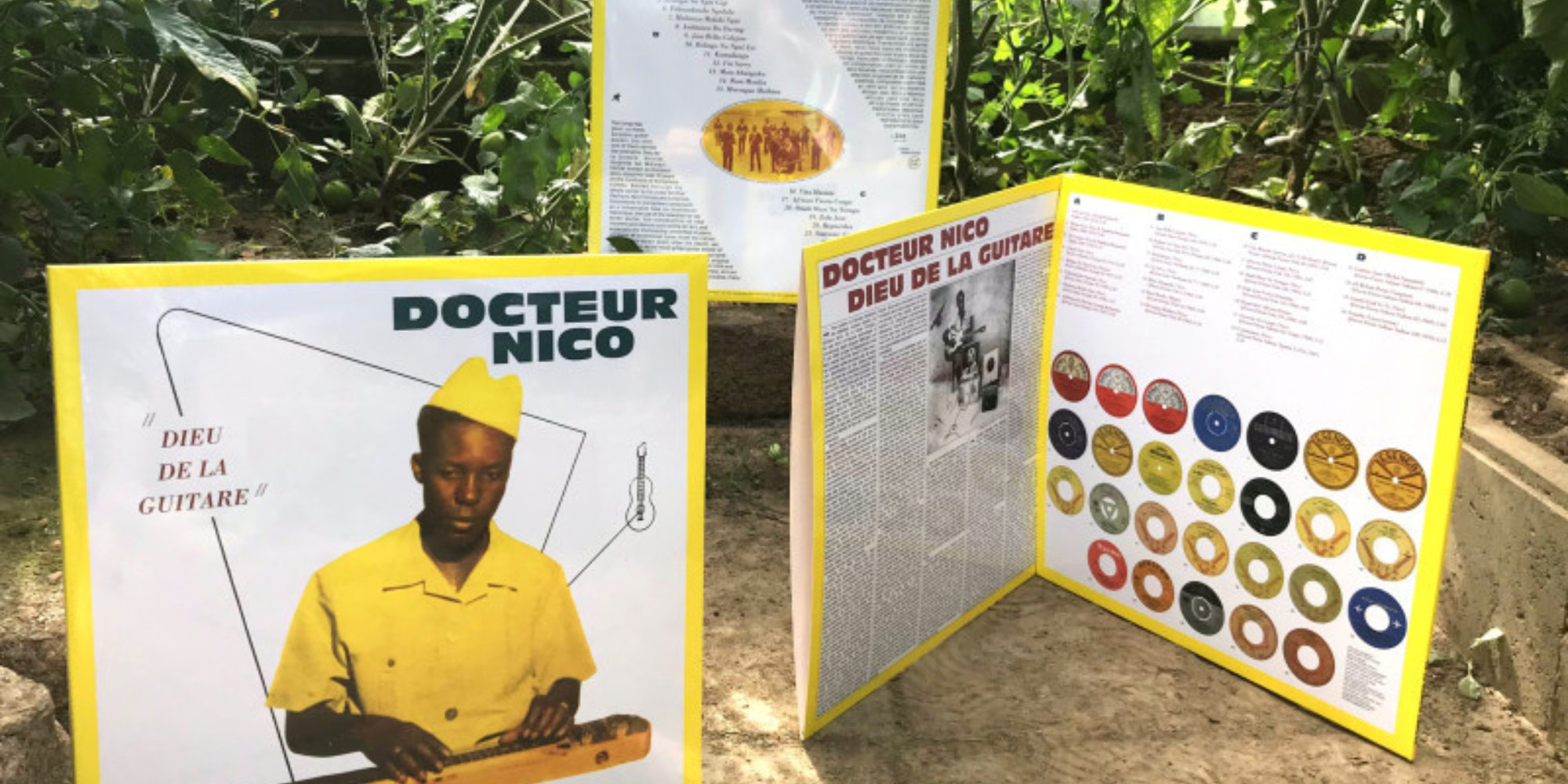 On the existence of any god, but particularly a god of the guitar, I am agnostic. Disciples might say “In the beginning Nico created the heavenly and earthly Congolese guitar style,” but I’m not sure that’s true. Nicolas Kasanda learned to play from his elder brother, Charles Mwamba, whose skill with the instrument earned him the stage name Dechaud–meaning “hot.” Dechaud’s first guitar belonged to his cousin, Tino Baroza, and he began his career playing alongside Zacharie Elenga, known as Jhimmy le Hawaïen for his guitar style, and Elenga had listened to Henri Bowané, who wasn’t the first musician to realize how well-suited the imported guitar was to Congolese music. There is no doubt, though, of Nico’s importance to the modern genre that began to develop in Léopoldville and other cities of the Congo as early as the 1920s and continues to develop even now, call it maringa, call it rumba, call it soukous or by any other of its many appellations. Guitars are essential to its sound, and no Congolese guitarist has been more influential than Docteur Nico–not even Franco, who was one year older, more prolific and more famous.

Nico was barely 13 years old when he got his first citation as the featured accompanist on an early record by singer Kallé Kabasele, “Parafifi,” which quickly became the biggest hit of 1952 in the Belgian Congo and the adjacent French Congo. Over the next couple of years Kallé, Nico, Dechaud and Tino assembled a band with four other musicians and eventually took their name, Orchestre African Jazz, from one of their songs. “African Jazz” is the track that begins a new Nico retrospective, Dieu de la Guitare, from Belgian boutique label Planet Ilunga. Two vinyl LPs, it contains 27 tracks (the last a snippet) made between 1954 and 1970. Although lots of Nico recordings–-with Orchestre African Jazz and other bands–-were later reproduced on widely distributed European LPs and CDs, a good many of the pieces of this set haven’t been reissued until now. Their inclusion, along with some well-known classics, makes this album compelling to Nico fans and a fairly good introduction for anyone who has not yet benefited from the doctor’s curative ministrations.

Not only a guitarist, Nico was a composer as well, and the album includes two of his earliest songs, showing how deeply he was impressed by Cuban music, especially the sones and boleros of groups like Trio Matamoros and Septeto Habanero. In this period Nico, like virtually all Congolese musicians and their Cuban counterparts, played acoustic instruments, but in 1957 he took up the electric guitar and from then seldom put it down. That was the same year that, honoring a record contract, he participated in the initial sessions of a band aptly called Rock-a-Mambo. As the two selections here attest, Nico’s electric guitar spiked this band’s Afro-Cuban stylings with shots of rock ‘n’ roll. Back with Orchestre African Jazz, he continued to explore the sounds that electric guitars and amplifiers made possible (especially reverb) in an expanding repertoire of forms that included calypso and merengue. He also delved into his musical heritage. He and his brother, both born in the southern Congo Kasai region, grew up with the music and dances of the Luba people, and some of their most exciting songs–“Tshiandanda Ngalula” and “Kamalangu” in this album–render the rhythms and florid note patterns of Luba xylophones and thumb pianos on their twined guitars.

In 1960 Nico and Dechaud were chosen to play in an all-star band in Brussels, where delegates of various Congolese political parties were meeting with Belgian government ministers to determine the colony’s future, and there the group recorded several topical songs that were noticed in Europe and celebrated throughout Africa. But although those records featured Nico’s guitar, not one is included in this retrospective. This regrettable omission is almost mitigated by a surprise: a recording made later that year by Orchestre African Jazz with Nico supplanting its leader, Kallé Kabasele. (I didn’t know that this configuration cut any records.) The circumstances were extraordinary: Belgium had abruptly ceded colonial rule to a hastily elected independent government, and within 40 days the Katanga and Kasai provinces had seceded from the incipient republic. When prime minister Patrice Lumumba sent troops into Kasai and thousands of Luba civilians were killed, Dechaud and Nico (according to Planet Ilunga’s Bart Cattaert) parted ways with Kabasele, a staunch friend and supporter of Lumumba, and took most of the band with them.

A tumultuous year passed before the brothers and Kabasele reconciled after Lumumba’s assassination. The reformed Orchestre African Jazz included Cameroonian saxophonist Manu Dibango, who’s featured in “I’m Sorry," a manic instrumental piece composed by Nico, but despite the band’s widespread popularity (trumpeted in Dechaud’s best-known song, “African Jazz Mokili Mobimba," which is not included in this album) the harmony didn’t last. Kabasele was ousted again in 1963, this time over suspicions of financial mismanagement. He retained the rights to the orchestra’s name, so the other musicians called themselves African Fiesta. The songwriter and singer Pascal Tabou, dubbed Tabu Ley Rochereau, who’d been with Orchestre African Jazz for five years, became more prominent in African Fiesta, and Mujos Mulamba, who’d recently left Franco’s OK Jazz, gave the lineup a new voice, but for the most part the reconstituted band upheld the sound and style of the original.

However, the African Fiesta tracks in Dieu de la Guitare give the impression that this band was devoted almost entirely to Latin music, performing versions of classics by Enrique Jorrín and Demitrio Ortiz and writing imitations, some with meaningless Spanish-sounding lyrics. Three of the eight selections (two boleros and a canción-lento) would be dreary if not for Nico’s bright, engaging guitar solos. African Fiesta actually experimented with a wide range of genres, including Ghanaian highlife, French chanson and American country & western, and–most importantly–continued to develop the distinct modern Congolese style that was becoming popular all over Africa. This album’s only example of the band’s true métier is “Omeli Mayi na Ntonga," a 1965 Nico Kasanda composition sung by Rochereau, which is not as strong as many that could have been chosen.

African Fiesta had hoped to be a collective of equals with no leader, but within three years contentions between Rochereau and Nico split the band. Each led a faction, brought in young talent, and built from strength to strength, Rochereau with African Fiesta National, Nico with African Fiesta Sukisa. Sukisa is a Lingala word commonly used as a verb to mean “bring to an end," but placed after the noun it serves as an adjective, so the meaning of Nico’s band name is not “bring an end to African Fiesta” but “the ultimate African Fiesta.”  Whose African Fiesta was truly the ultimate–Nico’s or Rochereau’s–was a topic of vigorous debate among fans, and the arguments persist among Congolomelomanes around the world even now. Did National ever have as brilliant a guitarist as Nico? Did Sukisa ever find a finer singer than Rochereau or as gifted a composer? No and no, but they were both great bands nonetheless.

Dieu de la Guitare does more justice to African Fiesta Sukisa than to its predecessors. “Limbisa Ngai” is gorgeous. It was composed by Michel Ngoualali, the band’s saxophonist and flutist, but he isn’t heard in this 1968 recording; either instrument would’ve been extraneous in such a finely spun setting for Nico’s swooping and soaring electric lap-steel guitar, Dechaud’s intricate mi-composé guitar, and De la France’s interweaving mi-solo guitar. (And Valentin Sangana’s plaintive yet unimposing voice is just right for the song.) Another good choice is “Semeki Etali Yo Te," one of several Sukisa hits in the late-‘60s dance style called kiri-kiri. You don’t have to know the steps to appreciate how the kiri-kiri structure, with its characteristic instrumental section in the second half, lets you hear clearly what each of the three guitarists is doing with his part, one after the other, but you might rise to your feet with elation when the whole band rejoins at the end of the song. The high spirits and blithe finesse prevail into “Ntumba," which features two new Sukisa singers–Lessa Lassan (who wrote the song) and Josky Kiambukuta–and foster every expectation that this band would keep on rocking forever.

But it couldn’t. Nico was increasingly beset by illness and domestic problems exacerbated by heavy drinking, and by 1974 African Fiesta Sukisa was, alas, brought to an end, never to be the ultimate again. Almost miraculously, though, Nico re-emerged in 1980 and amazed audiences by performing with his old rival, Tabu Ley Rochereau, and the band renamed Afrisa International. He participated in recording sessions with this stellar band and went on to make at least eight albums with other musicians before his death in 1985 at the age of 46. Most of the music of his late period lacks the ingenuity and verve that earned him his reputation, but the Afrisa tracks are magnificent, and my biggest disappointment with the new Nico retrospective is that it doesn’t include one in particular: “Resurrection," which has never been reissued. Nico composed the music in a nimble Luba rhythm and Rochereau wrote the words that celebrate his erstwhile partner’s return to health. The guitarist had lost none of his sure, agile touch or his lustrous tone, and it’s a glorious record that too few people have heard.

Instead, this retrospective concludes with a track made 10 years earlier, “Pauline” (here untitled), but only its first 21 seconds: the master’s flourish on his electric lap steel guitar and a voice that exclaims “Ah, Nico, dieu de la guitare!” To hell with my agnosticism: Despite its shortcomings, this album is a new testament to the greatness of the mortal Docteur Nico Kasanda.