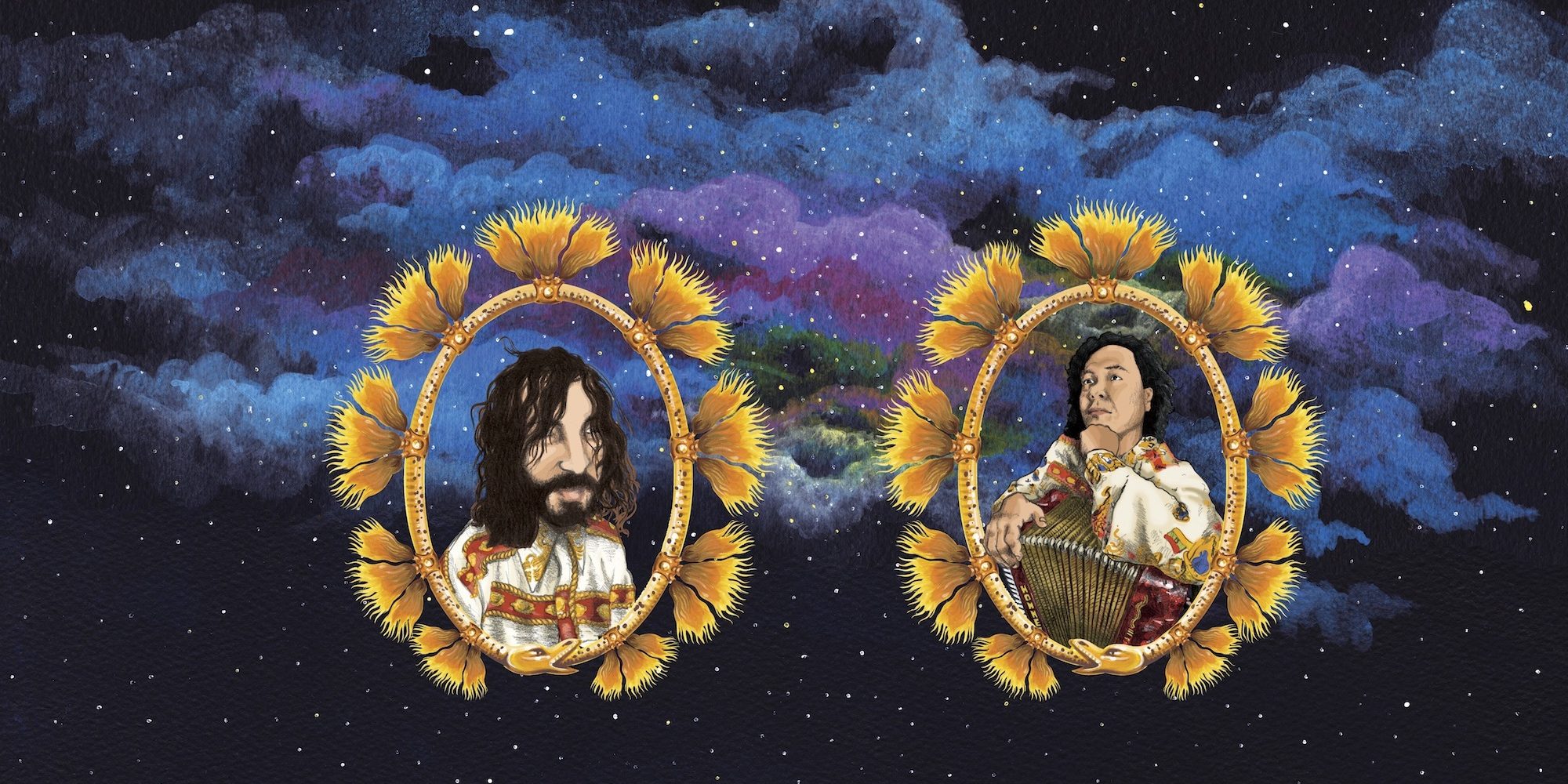 From the first moments of the Meridian Brothers’ new album, Paz En La Tierra, you can hear that something is different. The band—which is just Colombian musician Eblis Álvarez unless playing live—has teamed up with Conjunto Media Luna’s Iván Medellín for the new album. Centered on Medellín’s accordion, the resulting album draws heavily from traditional vallenato, an Afro-Indian-European music from Colombia’s Caribbean coast. Fans of outre-cumbia are treated to the folkier forebear of the ‘60s-and-onward cumbia canon Alvarez usually sounds like he’s drawing from. Colombian merengue (not to be confused with Dominican merengue) and other Caribbean forms like son are all fed into the Medellín-Álvarez machine. But even though hand percussion and accordion have replaced the dubby swells, nasally synths and programmed drums that characterize Álvarez’s work with both the Meridian Brothers and Frente Cumbiero, Paz En La Tierra’s songs still look forward to an anxious future. It may be in the shape of Colombian paseo, but the song “La Conquista de Outros Planetas” is actually about space colonists conquering other planets. Out today on Bongo Joe Records, Paz En La Tierra is, both at first glance and twelfth glance, a kinda weird left turn by Meridian Brothers. But then, their formula starts with ear-worming micromelodies, anchored by headbobbing basslines and then is washed over in weird left turns. Paz En La Tierra has an abundance of all three.

Meridian Brothers’ music has, in the past, aspired to a sort of plastic exotica—spacey, slick in texture, and modular, but kind of rigidly fixed on the grid--airless even. But the accordion is a breathing thing, and on the album, it dives and sighs and interjects in long knotted melodies. Both on percussion and especially in the vocals, Álvarez is looser and more dynamic than ever as he plays against Medellín’s improvisations and whirling lines. The vocals are also much more forward and Álvarez’s affectless baritone is recorded with little in the way of modulation or reverb. There’s no escaping that these are songs about things—space colonialism, calls for love and understanding and, on “La Secta,” the dream of founding a religion in honor of Diomedes Diaz, Colombia’s most popular vallenato singer.

There was something retro-futurist about the Meridian Brothers’ sound that we came to know—'70s synthesizers, '80s drum machines, molded into the South American musical equivalent of space-age mid-century-modern furniture. It sounded like it was old, but nothing in the past actually sounded like that. Álvarez says he has wanted to make a “traditional record” centered around the accordion, arguably the most important traditional instrument in Colombia (if you want to make a case for the scraper, it’s also prominently represented on this record). If the insistent electric bass didn’t tip you off first, the songwriting makes it plain, this ain’t your or Álvarez’s dad’s vallenato. The Meridian Brothers delightfully oddball approach is durable enough to survive the move to the world of wood, metal and moving air. Paz En La Tierra doesn’t sound like the Meridian Brothers you might expect, and yet they sound indisputably like themselves.