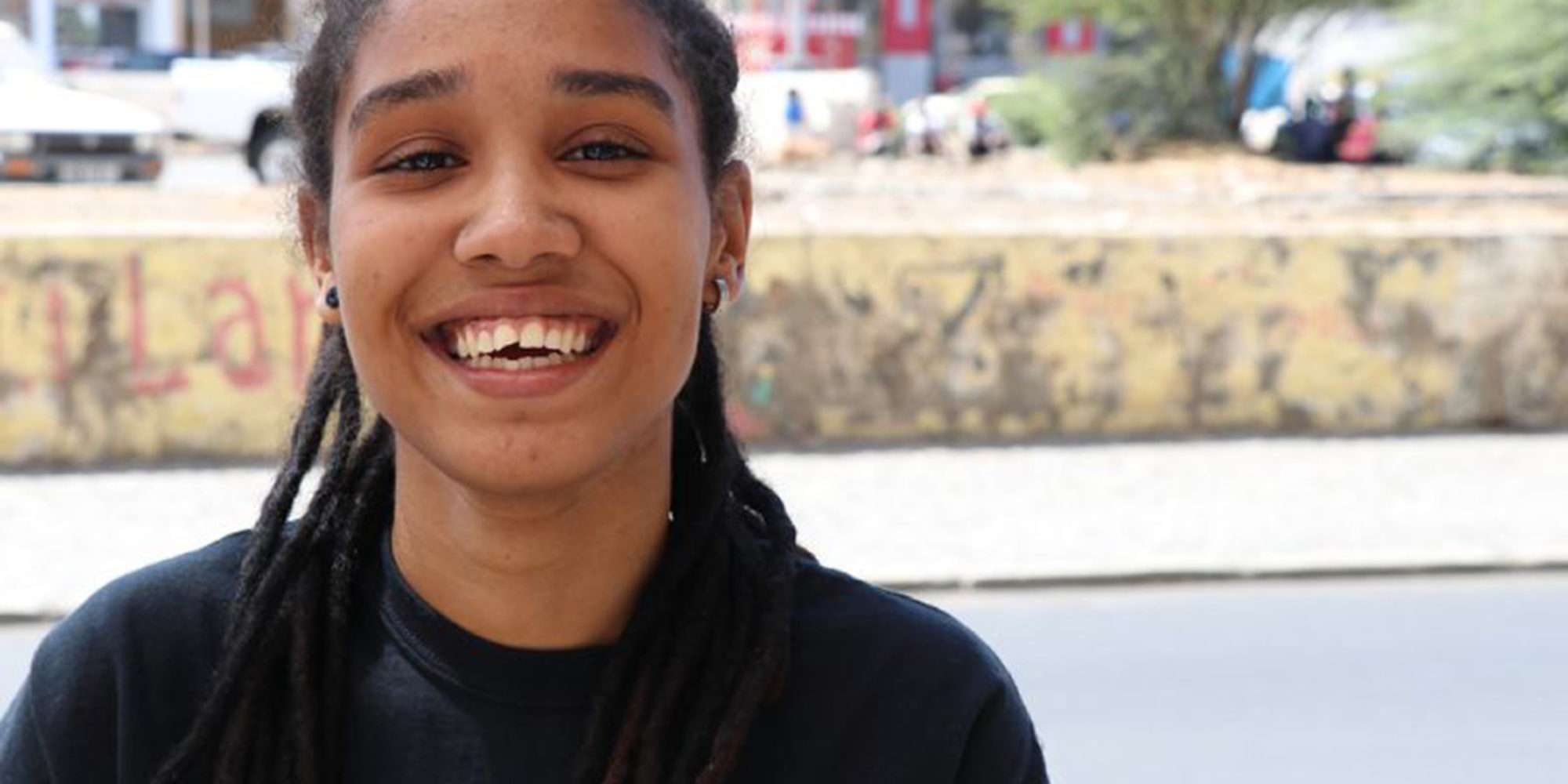 Interviews May 25, 2018
Cape Verdean High Schoolers on Their Future in Music

Want to know the future? Ask the youth. For our recent program, "Cape Verde Sounds: Heard and Unheard," we spoke with several artists on the big stage, but to really get a sense of how things are moving, it makes sense to ask those who will guide it forward.

When Afropop producer Sebastian Bouknight was in Praia, Cape Verde, he attended an English-singing competition for high schoolers from across the main island of Santiago. Dozens of teens, some with refined voices and some just getting started, took turns singing for their supportive peers and teachers on a stage in an echo-y high school auditorium. We heard covers of Celine Dion, Christina Aguilera, Roberta Flack, Estelle and many more. Ten singers made it through the second round, set for a month later.

Dualinda Nascimente, a teacher and one of the organizers of the competition, said that the intent was to get students to use English outside of a formal classroom setting. “In the classroom," she explained, "you have some rules you have to follow. With this, you don’t have rules.” Outside of the pressure of testing, the students feel more free to practice their English. Organizer and teacher Nelson Santos describes music as an “authentic material” that contextualizes the language and facilitates learning. Why English? Santos says, “English, for better or worse, is the most powerful language on Earth – everything on the Net is in English…business, aviation, everything nowadays is in English. English is the language of tourism. So we try to motivate our kids to speak."

Now in its third edition, this competition is more than just language practice. Nascimente says, “We do this not only to promote English -- we have some talents in schools that sometimes we don’t know [about], and through this kind of event...they just pop out." In a country brimming over with musical talent, there were many impressive singers. Afropop got a chance to speak with some of the students that made it to the next round. Here is our interview with high schoolers Maya Neves and Felipe Barbosa, for both of whom music is life. This interview has been edited for clarity and brevity.

Sebastian Bouknight: Congrats in the competition! Can you introduce yourselves?

Maya: I’m Maya Neves and I’m from Pedro Gomes. I’m from Praia as well but I was raised in another island… São Vicente.

That’s where Cesaria [Evora] is from. What did you grow up listening to?

Maya: I grew up listening to a lot of types of songs, but of course I listened to Cesaria, traditional music… but I also had this thing for jazz and blues and reggae – which is obvious [Points to her dreadlocks and laughs].

Felipe: She said it all. Like, we are the 21st century Cape Verdeans, so we have a lot of other influences than the Cape Verdeans who were born in the ‘70s or the ‘80s. For me, since I was four and five, I always listen to Rihanna and stuff – the American singers – because my sisters love them. But, as I was growing up, I started to hear Cesaria Evora and Mayra Andrade and Tito Paris and other good singers we have in Cape Verde. But I guess we both are kind of mixed when it comes to the genres. We like jazz, we like some coladeira, we like some pop, you know… we are a mixed population so we like a lot of stuff at the same time.

So the older generation, your parents, what are they listening to?

So what song did you sing at this competition?

Maya: I sing Jorja Smith, “Something In the Way.” She’s amazing. I think she’s from the U.K. I discovered her recently and I started listening to her music and I was like, wow, I need to sing this. And I chose that song. I recently went to a TV show…and I sang that song and another song that I wrote.

So you’re a songwriter as well?

Yeah, I write songs and I’m about to release an album, a CD. Yeah!

Do you write too, Felipe?

I write, but not officially, not professionally like her. She’s releasing an album! [Laughs].

Maya: I’m just getting started! I just found a sponsor and he liked my voice, he liked how I sing, so he was like, let me help you. He’s used to helping people who want to be an artist and I just had luck to meet him… so we started working.

So is that common here? Are there sponsors for musicians?

Maya: Well, of course there’s people who’ll be looking for new artists to show to the world, but it’s not something that happens a lot. ‘Cause there’s a lot of…how can you say…competition. Here, we have a lot of competition. There’s more people trying to get you off than get you in. So I just got lucky. People here are really… how can I say… they really like to be in the light, you know? They like to be seen. And if they see somebody who is more talented than them, maybe they would try to push them off, you know? So, I guess they get scared or something.

Felipe: It’s a tough world because we are such a small country and we have a lot of people who like to sing and who wish to have a contract with a label. And we don’t have a lot of sponsors here looking for somebody. Everybody here sings so it’s a lot of competition and sometimes it’s hard to come out.

Maya: Like, from 2016 until now, there’s been a lot of people coming from nowhere.

What has to happen to make that change?

Felipe: I guess, because in Cape Verde, we are a small country so we don’t have that much money for music…we don’t have that many labels. In America, you have a lot of media, a lot of stuff. In Cape Verde, it’s reduced. The broadcasting channels are little and the labels are little. Once a time, one person…can get that chance like she’s having now, but it’s not easy. You have to be a super lucky person to have those kind of chances.

Maya: My sponsor, he’s from here, he grew up here, but he lives in America. He’s a teacher. He created this label all by himself. He’s a rapper and he was gathering [artists], all with his [own] money. He helps you if he sees that you really love what you do. [If] you do it for the love, he will help. He’s a great guy. He likes to help people from the place where he’s from. We had this show for children, it was for free… it was awesome, the children loved it, we all were having fun, no conflict with each other... it was beautiful.

His name is Dani…his artistic name is Dani Di DeDe. And the name of the label is Fidju Tchada Records. FTR records.

So it sounds like you’re really trying to make music your profession.

Felipe: Me too! Last year I started with a band, we started to do some gigs… She’s in 12th grade, I’m in 11th so next year I’m going to go to college, somewhere in the world – I don’t know yet – and I’m gonna try to be a musician there. America, Europe, I don’t know. Where I go in this world, I will try to do what I want, and that is music.

Maya: Yeah, exactly. After I will release my album…my big dream is to go to New York and to Berklee School [of Music] and study jazz! I really want to do that! And hopefully I will do it, because I have, like, a lot, a lot, a lot to learn. You always think, “Oh, I’ve done this, I’m a boss,” you know? But, no…

Felipe: Everybody needs something to learn, everybody learns something everyday, I don’t think we have “bosses” [in music].

Felipe: You know how far that is?! O.K., most singers in the world are not going to that level, so, [Laughs] we’re still trying.

So, right now, we’re at an English singing competition. Do you feel like you need to sing in English to get that big?

Felipe: Yeah, that’s my opinion. I guess when you sing in English or when you sing genres [that] are bigger, you have more reach, and that’s what I’m looking for in my life. In my future life I would like to sing just in English… Not forgetting that I came from Cape Verde, yes, but we have to separate “I am Cape Verdean” and me as a singer. I would like to sing pop in English and stuff. That’s me, I’m sorry.

Felipe: They push you hard to sing in Kriolu, to sing traditional stuff… I feel like in the next two years, I have to go out [of the country], because, singing pop in English here in Cape Verde is not going to happen. People are not buying your stuff because the most part of Cape Verdean people don’t even understand English, you know? They all understand Kriolu and a little bit of Portuguese. So you have to go out if you want to make a career in English here in Cape Verde. It’s incentivizing people to study English more…

We need to go out – that’s why Cape Verdean artists are not the biggest in the world. We just stay in the Cape Verde, we just stay in Kriolu and Cape Verdean rhythms and we’re not that big. When you want to reach something bigger here, in English, it’s very hard… every single time you’re going to sing, you have to fight for your right to sing in English… I like to use an example: if Rihanna sings in Bajan [English] from Barbados, nobody would know her… she wouldn’t be that big.

Maya: If you want to go worldwide, English is one of the most important languages of the world. You have to know it.

Well, I wish you all the best, and I’m looking forward to hearing the CD! Thank you so much for taking the time.

Maya: Yeah, for sure!

Since we spoke, Maya (who professionally goes by Mayra Neves), actually won a national TV singing competition, Voice One. Congrats Maya! Here is a video of her final performance, a cover of the song "Love Song" by Adele.

Keep up to speed with the star-to-be at her Instagram.