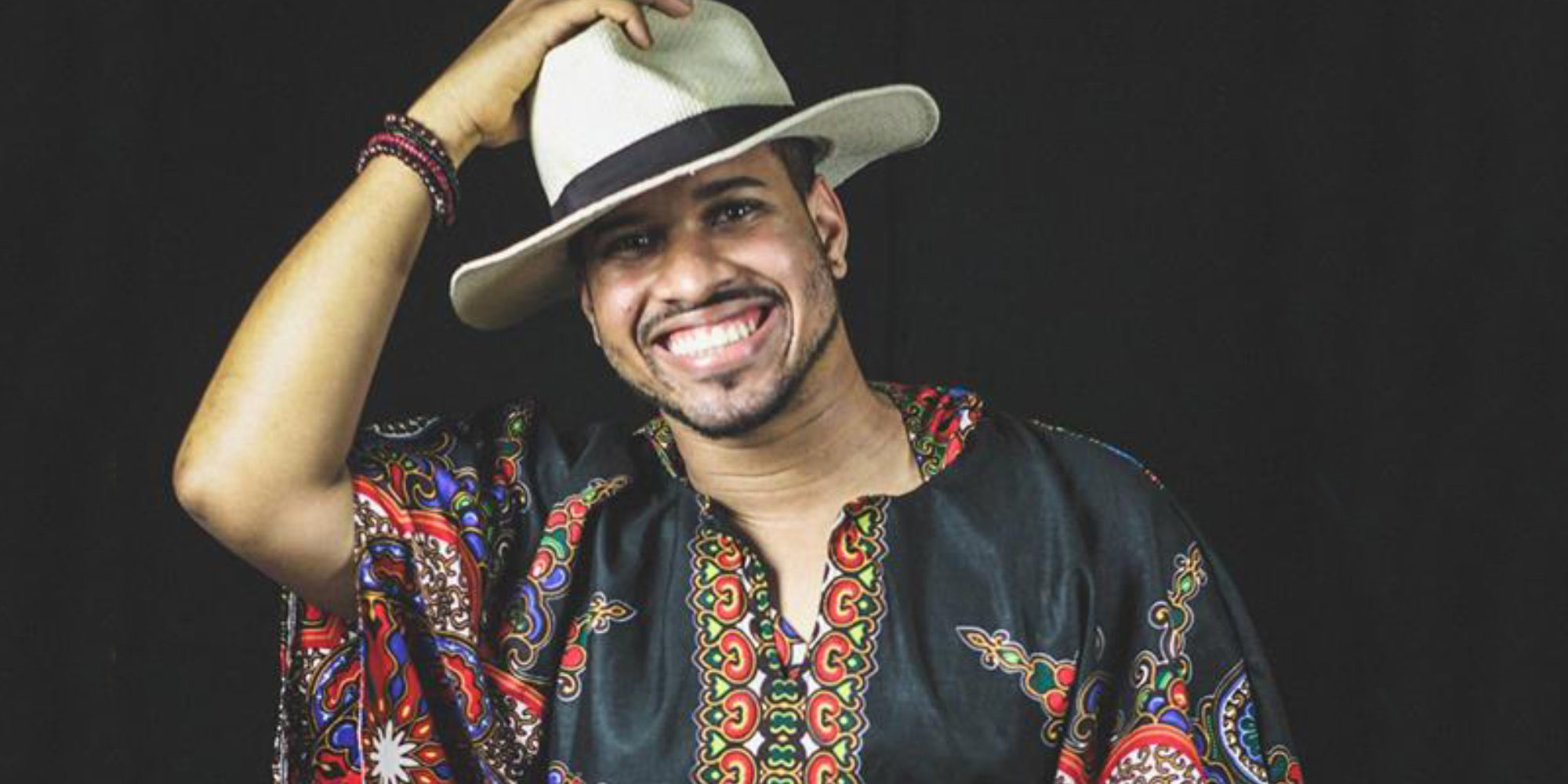 Hailing from Praia, Cape Verde, Djam Neguin describes himself simply as "an artist." He dances, sings and works in the music industry as a manager. Here's one of Djam's tracks, "Dansa."

From his various vantage points in the musical landscape, he has a clear perspective on its ups and downs. Afropop producer Sebastian Bouknight was recently in Praia and sat down with Djam for a long conversation. This interview has been edited for clarity and brevity.

Sebastian Bouknight: How did you get started here?

Besides being a dancer and singer, Djam also recently started an artist management and event planning company called Yakuarella. It’s a play on the Portuguese word for watercolor – aguarela – which he sees as a symbol of the swirl of sounds and ideas that he hopes to promote.

Who are you working with?

Why did you decide to start in that line of work?

If more people have knowledge and have possibilities to grow, its better for all of us because we can be stronger as a class of artists. I know, maybe in a selfish way, some people think it’s better to grow yourself and get out of here and have a career, but I think it’s better to contribute to your own country as well… Of course you cannot help everybody but you can make them aware that they have the possibility...

How would you describe the music scene here?

I don’t know if we can say it’s diverse. There are some few people that think outside of the box, but most of the artists are the same in terms of what they are doing, in terms of creativity. I think that we have some great artists that do covers and they can really be interpreters – not really sing like everybody else. They make a difference when they sing. We have Ela Barbosa, she’s doing a nice thing with the mornas because she put it like it’s something new, you know, not trying to be [the legendary singer] Cesaria Evora, because she’s not. And then we realize that you have a lot of people doing kizomba, a lot of people doing Afro-house.

From talking to different artists, it seems like there’s pressure to stick to traditional Cape Verdean music.

Traditional [music], today, it’s really complicated to talk about it because you don’t have, like, new things. You have some people that are fusing…they can mix the genre, trying to do different [things]. You can find coladeira…not trying to go only for what everybody else already knows, but trying to be contemporary in terms of the music. And then, this is a small market. You don’t have show houses – like, we don’t even have an auditorium. We have [one], but it doesn’t have conditions for shows. The showcases happen in the bars and the restaurants, and then you have the festivals or, once in a while, some events that some artists can participate in.

What’s your take on the many music festivals here?

So in the festivals, there is this kind of disease. [Laughs] Like once a year, you have two, three, four artists that are on top, and everybody listens to [those artists]. And then they travel, go from each festival. It’s kind of, you know, limited. Or some artists like Djodje and Loony Johnson, they have more popularity so they [are] every time at the festival. It’s kind of like a lobby. There are not big opportunities for new [music], especially if you don’t sing kizomba or kotxi po – it’s a fast funana… kind of disco version of funana.

So the local industry is not set up to promote a variety of music?

Yeah, there is no big space for different styles. So if you are a rock singer or jazz singer or blues singer or world music singer, there is not much space for you. You have to make your own concerts, which is very expensive. You have to wait when people from the bars and restaurants want to get you for the shows, which is not that much. They want to put more artists that sing the same songs, like funana. Especially if you sing the songs that everybody knows, it’s better. When tourists come, they go to the bar…it’s like two hours of traditional covers, it’s not that much artistic. Sometimes, when there is a cruise, they can invite some batucaderas [batuku performers]… We’re missing the concepts. It’s like we’ll do it because we have to do it.

We have a hard way to deal with art here – we don’t accept the new very much. It’s a small country… everything is circular. It’s difficult… Even though we are more open to the world and have more access to everything… There are more people doing music… Today you can find different technologies [and] there is more access to technologies. Everybody has a studio now. But people are doing the easy thing, [using] the samples. So creating music is the really nice part of it, [but] it’s expensive, so people prefer to go to the commercial [side].

It sounds like, to be a big name in music here, you either have to sing more typically Cape Verdean music or do kizomba.

You have some names that today represent Cape Verde, like Nelson Freitas, Djodje, Mayra Andrade, Lura, Elida Almeida…They don’t even live here, most of those artists. They actually don’t perform here a lot, [maybe] they come once a year…Those are like the standard names of our music, [but] they don’t stop here, they don’t perform here as much. They come for the festivals. Even Mayra Andrade, she only comes for… something really specific. I think she’s living in Portugal, in Lisbon. It’s because there is no market for that music. It’s a small country.

Especially if you are a rapper. Hip-hop--we understand that [over] the years it’s growing. It’s growing because most of the youth listen to the rap, but it’s really hard. [The] people that prepare the festivals–-they think we have to put one hip-hop [artist], one whatever. They decide one artist per genre, then if you are the artist of the moment, you are going to be there. But in hip-hop now…there is these private parties, so most of them can also have a side market. They are doing a lot of showcases at the discos, they can perform in different islands…It’s an opportunity for them but it’s very small in terms of expression.

Music is so important to Cape Verde, I would think the government would be supporting artists. Are they?

The thing about the art business and art market in Cape Verde… it happens in two sides. You have the authorities, or someone that should create opportunities, and you have the artists, but they don’t dialogue. Things happen with no plan, with no consensus, with no concepts. The artists expect the government or whatever to support them, but they [aren’t] even organized. How can we demand something if we are not organized? If we don’t have an association, if we don’t fight for our rights. Because it’s small, everybody wants to get what they can get and they kind of fear each other in terms of competition…We have common things that we need in common.

Why do you think that is?

People are very pacific in terms of things that happen. It’s O.K., it’s the government, [but] what’s your role in this, as a citizen? You have to work, you have to demand, you have to search about what you need as an artist. As a human being, you have your rights, and I think it’s going to be a long way because we have to organize our different artists. [We] should talk about our problems, should organize ourselves. We’re never going to be able to grow if we are not able to be organize and call the authorities and [say] look, these artists – we have the names – they all want this… it’s public money.

There is not much they are doing, like to provide a better way for artists to improve themselves as an artist, like education. They are doing things, yes, they are doing great things, some ideas that are good but they fail when they don’t promote this dialogue. They should identify who is doing what… what are your needs, people, you need space to work, you need money to produce, you need access to festivals outside?

What do you hope will change?

We have people here with talent… We have great dancers, great musicians – and they learn from the ear, so it’s a talent. Of course, it’s something that really needs to be explored and make the world know about that, make the world know about those guys. They are here, they have this organic thing inside. So, maybe we have to learn with the rest of the world and the rest of the world can learn with us as well, and we can change things… It’s a long road… you feel motivated and not motivated at the same time because you feel like, oh, let me work, let me work, let me work, but you have to work so much.

It’s a small country. “Petit Pays.” [Laughs] Like Cesaria said. Every island is a country. Cape Verde is a couple of countries. So different, even in terms of language, the way we speak, the way we live is different… [But] the world should pay attention to us, we have much to offer!

Thanks so much for taking the time, Djam.